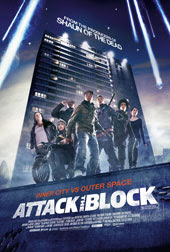 
A bunch of young kids… bully’s, thugs, roughians. You know them, you have seen them, and to some extent you may even fear them. But these are merely movie characters, although you judge them from first sight. You recognize them from movies like James Watkin’s Eden Lake 2008, Daniel Barber’s Harry Brown 2009 and Johannes Roberts F 2010 – those movies where the nasty little bastards hide their faces behind their hoodies as the toss insults at people and pose a threat to mankind. You know they are trouble, and a sudden knife in the back wouldn’t surprise you.

At the same time these kids we see on screen in Attack the Block are our version of Goonies, our Eliot trying to protect his extra terrestrial friend or even the kids from Super8. But this isn’t a Hollywood action adventure, this is British horror drama Attack the Block and the kids are merely doing what they do everyday, looking out for their mates and protecting their block.

A young woman, Sam [Jodie Whittaker] walks home from work late one night. In a dark backstreet, a band of kids circle her, pull a knife and mug her. Something falls from the sky, smashing through the roof of the car parked on the street. Sam uses the moment to run to safety whilst gang leader Moses [John Boyega] checks out the car to see what loot may be found. Instead of booty, he finds a hairless small being that attacks him, scratching his face in the process. The creature escapes and the gang, Jerome [Leeon Jones], Dennis [Franz Drameh], Biggz [Simon Howard] and spunky junky Pest [Alex Esmail] all lead by Moses, chase the creature, forcing it to hide in a playground shack… from which escape is impossible. The band of lads cockily wanders into the shack and beat the naked monkey werewolf alien like creature to death. They take it back to their block of flats, showing it off, and boasting about their feat to friends along the way, with the intention of hiding it in the back of the dope room, belonging to their mate Ron [Nick Frost].

That’s when more things start to fall out of the sky… things determined to reclaim that one of their kind that has fallen victim to the earthlings. Hence starts the battle of the block.

Attack the Block is the English equivalent of J.J. Abram’s Super8 2011, but instead of the stereotypical American cute and innocent adolescents, the UK once again goes for a harsh realism that portrays the kids of today as victims of circumstance. These lads are no innocent little boys, they are rough, tough thugs… or at least that’s what we are supposed to believe in the initial setup and presentation of character.

Because where we are led on to believe that these lads are hardened criminals, they are all fruit of the council blocks. They do what they see, and strive to become what they know. The lads look up to resident gangsta Hi-Hatz [Jumayn Hunter] just like the comic relief found in the shape of Probs [Sammy Williams] and Mayhem [Michael Ajao] look up to the lads in the gang. During the narrative, Moses is made (a dealer for Hi-Hatz) and Probs and Mayhem are made too when they save Biggz. Yet another thing that separates this movie from the nice fuzzy cosy American counterparts is that Cornish dares to let the alien invasion have an effect on the gang of kids… Let’s just say that not all the kids will be going back to mom’s cooking at the end of the flick. Which brings a rather dark tone to the movie despite several comic relief moments. But overall, this is a dark movie.

The child characters are intriguing and filled with dimension, which make them interesting for us as an audience. On the one hand they are threatening thugs, in the next they are really only little kids who on any given moment would stay at home and play video games. This shines though on several occasions, like when Biggz calls his mom, or when Jerome explains that the knife used in the opening mugging merely was to scare her. A token of power over an adult situation. As I mentioned earlier, the kids are the result of the situations they have been forced into. There is a social commentary within the movie no matter how apparent or deliberate it may have been. Rough areas breed rough kids, and as the lads say on several occasions, the fuzz never listen to them, but merely judge them upon sight as crooks. Nothing positive can come out of prejudice.

Obviously Moses is the most intriguing of the characters. Where he has a real hard façade, director, writer Joe Cornish waits until the very last moment to let us in behind that rock-hard brick front. The scene where Sam enters Moses apartment, realizing that he lives alone, and in reality is only a kid forced to become an adult, is tender. Short and brief, but still a tender moment – Moses is merely a kid and we feel for him. It gives an insight into Moses life – keep in mind that his apartment is the only one we don’t tag along into when they all scoot off home to suit up their weapons early on – so he’s the enigma of the piece. It also validates Moses as a character to root for. With the insights that he’s come to and the insight the audience now have into his character, we empathise with him and accept him as the hero of the piece.


Being a lifelong fan of English sci-fi, the referents to great English genre authors really pop off the screen for me, [John] Wyndham Tower, [Alan] Moore Court, [J.G.] Ballard Street are smart – just like the several movie referents to Joe Dante’s Gremlins 1984, Spielberg’s E.T. 1982, Reitman's Ghostbusters 1984, all are dropped as he pop-culture referents they are and not as desperate nods at other stuff. As I mentioned this is the modern English version of something like Donner’s Goonies 1985, and the other mentioned films above, although in England we are all shoved together in suburban housing projects, which gives a perfect setting. This also gives for a great opportunity to call upon all those post-apocalyptc flicks that the filmmakers enjoyed as kids, because the movie does ooze John Carpenter. It almost feels like watching Assault on Precinct 13 1976 mixed with Escape From New York 1982, but with kids in the leading parts instead. With this in mind, Attack the Block is one of those movies which will be equally entertaining upon repeated viewing as you will spot more referents the more times you watch.

All right so the monsters may not be scary – there’s still a few good shocks and jump scares in there though – but they look fucking awesome, totally believable and work terrific in the setting which is presented. Terry Notary’s title of movement choreographer may sound ever so lame, but damn does he bring those creatures to life in the most amazing way.

Finally music. Stephen Price’s original score is terrific but the real delights are the stunning tracks by house music legends Basement Jaxx (Simon Ratcliffe & Felix Buxton) who give the movie the perfect tone. And perhaps I feel this way as the majority of their tracks are like updated John Carpenter soundtracks… remember those two movies I mentioned earlier… well you get the idea of what this soundtrack sounds like then don’t you.

Attack the Block is a brilliant movie. It’s not horror, but it does rely on horror motors to drive it forth. It’s really a classic hero’s journey flick. As Moses goes from an outcast – reflected in the way Sam, a metaphor for society, first reacts to him – to neighbourhood hero – as Sam speaks up for him and the neighbours cheer his name in the final moments of the movie. This one is a keeper mates, and a movie I'm already wanting to watch again.

I'm from the other side of the lake, so to speak - Los Angeles - and managed to see this a month or so ago. Although I don't have the same movie preferences as many Americans (meaning I could give a crap less about many of the "blockbusters" and other regurgitated messes which are produced), I did find ATB to be exactly as you said it was - a good blend of subtle nods to 80s teen films, mixed liberally with some good sci-fi gore and an enigmatic protagonist. Personally, I felt no remorse for any of those kids - they were thugs. But there was a lot of indecision on my part on whether I should root for them or root for their eventual demise. If nothing else, it was even more interesting for me since I have no familiarity with the housing system or neighbourhood dynamics over in England. Hopefully more Americans will see this good little movie (and I mean Americans, not "Amuricans"; they can stick with their NASCAR and America's Funniest Home Videos.)