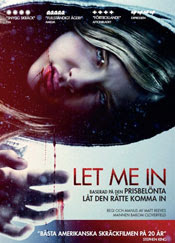 I cannot start to tell you how much I wanted this movie to suck. All the pre-talk indicated that they where going to go in a certain way that would contradict the magnificent original movie. I even threw a hissy fit after seeing the first trailer which showed that moment I feared most of all, the debunking of the mystique concerning Abby – or Eli, as in the original – and spelling it out: Are you a Vampire? This kind of determined it for me, Let Me In was going to suck ass…

…but I was wrong. Boy, oh boy was I wrong. I was so wrong that my 4 out of 5 rating and the quote “Incredibly Exciting” was used on the Scandinavian DVD and BluRay covers. And I’ll be the first to tell you that I’m pleased to have been wrong. I just watched this movie for the third time, and it is a fucking great movie. It really is the horror version of John Ajvide-Lindqvist’s book Låt Den Rätte Komma In.

Before I get into this one, I just want to make a note of the fact that after seeing the film at a press preview last year, before writing that piece for the magazine I write for, I contacted John Ajvide-Lindqvist, as I have interviewed him a few times before, and I asked him what he though about the movie, as I was surprisingly finding that I really liked it. John too really likes the movie. Really likes it. He liked it so much that he wrote a long letter to the distributor to make sure that there was no “writer didn’t like the big budget version” bullshit left to linger afterwards. With John’s acceptance of the movie, it was easier for me to accept the fact that it is a great film and that I really did enjoy it. He more or less sanctioned the piece I wrote on the movie after that conversation.

Anyways dealing with remakes is a tricky business, but Reeves does a great job with Let Me In, mainly because he imitates the emotions, moods and atmosphere of the original. Where the original relies heavily on music, pop-cultural references and fashion of the eighties I grew up in here in Sweden, the American one goes more to the core and uses a little thing called Religion.

There are several referents to what was the numero uno fear in America during the eighties – Satanism and Satanic Rituals. Richard Ramirez, aka The Night Stalker was roaming in the mid eighties and used to draw pentagrams on his victims and later carved one into his hand when he was caught. Geraldo Rivera Exposed Satan’s Underground on his 1988 TV special, Judas Priest where taken to trial for hiding satanic suicide messages on their 1978 album Stained Class, and perhaps most famously the West Memphis Three where jailed for life (but recently just released) after being convicted of Satanic ritual murders. Satan was the bearded terrorist of the Eighties and Reeves taps into that underlying fear in the movie.

He also uses it to pose the question what is good and what is evil? Owen [Kodi Smit-McPhee] even asks his father the same question in one scene. It’s an age-old dilemma, doing wrong in the name of good. We know that you do not kill, or hit our fellow man. But when Owen strikes back at Kenny [Dylan Minnette] we cheer him on, even when the Detective [Elias Koteas] is about to expose Abby in her makeshift casket, we root for her and even feel satisfied when she takes him out. Not to mention that final magic sequence during the movies climax that takes place in the bathhouse. Brilliant, this is exactly how you create an effective and empathetic anti-hero.

I mentioned that this is the horror version of Ajvide's book, and perhaps even more so than Tomas Alfredsson's Låt Den Rätte Komma in (Let the Right One In) 2008, and that is seen in the fact that special effects are more mainstream horror meaning that they are not suggestive and off screen as in the original, but right there in your face, graphic, gory and scary as hell. Another detail that set’s the genre horror more than the drama is that Reeves chooses to cut up the narrative structure of the original and toss things around in a non-linear fashion. By having the movie open with the aftermath of The Father [Richard Jenkins] accident and capture which leads to his death in the hospital, Reeves actually opens his movie with an initial attack. This is what you do when you want to establish genre, and set the element of threat. Something just tossed a terribly scarred patient out of a hospital window… yeah this is horror.


The movie retains the vulnerability of the two young characters from the original, something that gives the movie a sensitivity that most other vampire horror movies lack. This one taps into the same vain that Richard Donner's The Goonies 1985, Spielberg's E.T. 1982, or even J.J. Abrams Super 8 2011 uses – the naïve vulnerability of the child characters set in adult situations.

But then there’s the key to the film. We talk about this when we give lectures with Constructing Horror. The movie manipulates us and through using emotional identification, the audience empathise with Owen and Abby. We may not be able to know what it’s like to fall in love with the vampire who moves into the flat next door, but we can identify with the feelings that Owen has. Being an outsider, a loner, the desire for revenge and the yearning unconditional love that Owen experiences.


Moving it closer to America, Romeo and Julia are also referenced at quite a few times, an obvious metaphor for “forbidden love”. Abby says to Owen that they cant be friends, and this is also the same backbone that Shakespeare used in Romeo and Julia – their love is forbidden, just like Abby and Owens, although they make it work, and kill everyone else instead.

Another detail I like about taking some mainstream conventions is the sequence when Abby’s father makes his last kill. Already when reading the book a few years back I was spellbound by this sequence and lustfully imagined how it would play out in a movie version. Reeves brings bin bag liners to the plot and uses them in what is easily one of the most exhilarating and captivating moments of the movie. The killer lies in the back seat as obstacle and obstacle are tossed at him almost as if fate is taunting him and making the last kill an impossible one. It’s a nail-biting sequence that lacks a counterpart in the original movie and text.


Reeves and crew have obviously taken time to find a tone and style that mimics the original, Grief Fraser’s cinematography, Ford Wheeler’s production design and Wendy Ozols-Barnes set design certainly looks like the cinematography and production design of Hoyte Van Hoytema and Eva Norén. Some scenes even look identical, something that really works for Let Me In, as those scenes have become iconic images of contemporary horror. Finally Stan Salfas' editing which brings some great juxtaposition to the piece has to be pointed out. There are some really smooth and effective transitions in there.


Being part of Hammer's grand comeback to the genre, Let Me In is a beautiful, emotional, engaging, effective and superb piece of horror cinema that despite coming off as mainstream is a movie that will become a modern classic and one that future directors will refer to in years to come.

I’m glad that I was wrong on my expectations of this film, and this is a film you should check out if you are into low key, engaging horror films with a bite.

Here's an Interview I did with John Ajvide Lindqvist a while back, as we talked on the pro's and con's of using children as a dramatic tool in Horror film and fiction.

I still feel that the question scene shouldn't have been in, but here the trailer again anyways,

Well my friend, after reading this glowing review it looks like I'll finally have to bite the bullet and give it a go!

You should. It's well worth the time. It takes nothing from the original, but is instead really pays respect to that one. I do know that Reeves made an point of screening the movie to Ajvide early on and getting his imput and possibly blessing for what they had done.