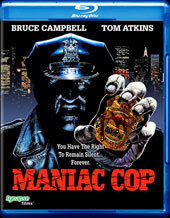 I don’t quite know why I always think of this one as one of the great eighties splatter classics, because it really isn’t when it all comes around. Sure, it has some fun moments of violence and gore, but nowhere near the level of Lustig’s previous Maniac 1980. Although Maniac Cop is a cult classic, but perhaps more of a frantic cop flick with some violent murders than the splatter flick I recall it to be.

But I don’t want to take anything away from Maniac Cop, because it’s still a rather entertaining movie, with a fantastic cast of cult actors, some great moments, but it would be fair to say that Maniac Cop is almost a bastard offspring of Maniac and Vigilante 1983, as all three movies move in the same sphere and Maniac Cop combines the themes of the first two in it’s narrative, a vigilante cop who is a psychopathic monster.

Innocent people of the big apple are being violently murdered buy a killer dressed as one of New Yorks finest. Detective Frank McCree [Tom Atkins] sees a connection between the killings and forces his bosses to act when he spills the news to a news-anchor friend who breaks the story of the Maniac Cop later that night. Paranoia hits Manhattan and nobody trusts the police, a lack of trust and a state of fear that ends with police men begin shot dead during a routine assignment. After having his cover up busted wide open, the Mayor approaches Commissioner Pike [Richard Roundtree] and rough neck cop Captain Ripley [William Smith] to quickly close the case. Things all fall into place when young police officer Jack Forrest [Bruce Campbell] is incarcerated for the violent murder of his wife. After meeting Forrest’s alibi – fellow police colleague Theresa Malloy [Laurene Landon] McCree starts to search for the killer elsewhere, and pretty soon all leads point towards police officer Matt Cordell [Robert Z’Dar] who supposedly died in prison several years ago…

What I find most fascinating upon this return to Maniac Cop is the brilliant script by Larry Cohen. Now this shouldn’t really come as a surprise to me as Cohen is and always will be one of the best un-acclaimed screenwriters of our time. You cannot, not like Cohen’s movies or the movies he’s scripted, there’s something about his movies that really appeal to me. To point out a few details that prove what great a screenwriter he is, I’ll present the following theory, and regular readers will note that there are two ingredients I would say are vital to making the movie believable.

Jack Forrest is a complex character to say the least! I love the dimension that Cohen has given him: a man who seemingly is down and low over the failing marriage counselling that he and his depressive wife Ellen [Victoria Catlin], leaves home to walk his beat and surprisingly is caught in bed with a lover, having an affair behind the back of his wife! To make things worse his wife pulls a gun on them, runs away into the night and falls into the hands of the Maniac killer… who lays her almost decapitated body on the bed in the motel room Jack was unfaithful in.

Obviously this magnificent dilemma creates dimension in the Jack character. He’s not all goody two shoes and becomes a more complex character than just a good cop sad for loosing his wife. That entire initial scene with her becomes an obvious lie and an act. He was lying to her, and there’s nothing to say that he doesn’t lie about other things.

On the other side one would think that our old dear friend guilt would rise it’s ugly head and motivate Jack to take revenge for his murdered wife… but no it doesn’t. I love the way Cohen uses Jack’s desire to be with Theresa as the motivator to go after Cordell, not vengeance or revenge, but sheer lust. Hell Jack hardly mourns his wife; it’s all about sticking it to Theresa. Completely fascinating, and again something that makes Jack (and in some ways Theresa too) very much more than the average serial killer movie protagonist that horror flicks usually churn out.

Returning to the comment that Maniac Cop is more a cop flick than a straight horror story is terribly obvious as the movie uses a whodunit motor and a lot of the plot concerns finding the real killer/freeing Jack Forrest. Not to mention the last act when there’s a lengthy car chase that goes on forever. For real, a chase that just goes on and on and on, as Jack is locked in the back of the Police truck Cordell has stolen whilst McCree and Therese chase him through the back streets of New York. There’s always some pleasure of seeing old New York complete with the twin tower skyline and a seedy 42’nd street Broadway. Images of a time long gone, before the Disney clean up of N.Y.

I can find a paranoia theme in the a lot of Cohen’s movies and scripts, here the obvious one being that the people of New York stop trusting the police after the news of the cop clothed killer is broke. It’s a pretty neat moment when an old woman reaches for her gun and blasts the brains out of the young cop who innocently knocks on her window. It’s also why the fishy Mayor demands the fuzz to shut this case down and put someone behind bars, so that the calm can return… after all it’s he who refused to connect the clues McCree so blatantly pointed out earlier.

There’s a sublime political message in most of Larry Cohen’s work. Here, just like the magnificent, God Told Me To 1976, there’s a dodgy mayor running the show It’s never really said out loud that he’s bad or corrupt, but you simply feel it, and you know that he’s a slippery bastard. Which gives for a great last scene, when Justice – despite how warped it may be – is served.

Is it just me, or would it be fair to claim that Cohen seems to have something of a fetish for St. Patrick’s day? The New York St. Patrick’s day Parade is recurrent in several of his movies and is even found in Maniac Cop, where Sam Raimi is seen as one of the news reporters giving his report on the festivities.

All in all, Maniac Cop still makes for a good nights entertainment. Somewhere between the hard grimness of Maniac and the cynicism of Vigilante, you find Maniac Cop, a movie that did so well that Lustig, Cohen and Robert Z’Dar made two sequels, and the characters all returned in a 2008 remake.

Keep an eye out for Maniac Cop on BluRay in just a few weeks, The Synapse disc is the way to go, as it’s filled with extra features and all the booty that makes it worth while picking up these gem’s on BluRay.

It will be fun to see this flick again. Maniac Cop 2 has always been the best one according to me, probably because it takes another step towards pure madness.

I didn't read your review, afraid of spoilers, since I just bought this yesterday for 3 bucks... hopefully I got my money's worth.

Hopefully it's better than Uncle Sam.