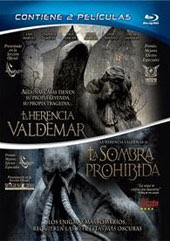 If legendary Spanish actor Paul Naschy hadn’t have passed away whilst this movie, and it’s sequel, where in production, I most likely would never have paid any attention to them. But researching this “last movie” – and the animated feature he was working on when he passed – the few stills and the teaser trailer definitely sold me the movie. Because not only do I love EuroGoth, I’m a sucker for anything remotely Lovecraftian, which there is plenty of in the La herencia Valdemar movies.

Shot as two separate movies, with two separate story line arcs, the movie could easily have been one long epic three hour. Both movies do hold their separate arcs, but are also linked together through longer storylines that flow through them both. There’s a wrap around found in the first film which in the second becomes the main narrative, and vice versa. In the second movie the past tense main narrative of the first instalment becomes the secondary plot in the “sequel”. As mentioned above it’s more of a continuation of the despite the La sombra prohibida: La herencia VAldemar II title.

An old Victorian building, the Valdemar House, sits on top of a hill uninhabited for an unmentioned – but long – time. Several real estate agents have vanished when attempting to value the place. Luisa Llorente [Silvia Abascal] ventures into the house in an attempt to value the place, but pretty soon shit goes astray and a drooling monster is chasing her through the corridors…

A private investigator, Nicolás [Óscar Jaenada], is sent out to locate Llorente, and finds himself on-board a train heading towards the Valdemar house for the entire first movie. On this train he meet’s Dra. Cerviá [Ana Risueño] who starts to tell him about the story and curse of the Valdemar Family.

The Valdemar family is obviously where the major part of the movie’s narrative is played out, with crosscuts to the two external stories every now and again.

Lázaro [Daniele Liotti] and Leonor Valdemar [Laia Marull] run the local orphanage, and more than anything they long for a child of their own. Circumstances lead to them almost accidentally come up with a way to make money off arranged séances where they take photographs of the visiting spirits – and giving Alemán an opportunity to stick in one of the finest nods to Naschy’s Waldemar Daninsky movies I have ever seen. But as all good stories nothing good comes without something bad, and here it presents a classic dilemma, which creates dimension in characters – it’s the age-old “Doing Wrong for Doing Good” question. Remember that Trier debacle from the last Cannes Film Festival, well that kind of thing. It’s the same reasoning, people doing bad things for a reason they believe to be good. All of the Valdemar actions are driven by passion and that yearning for a child of their own, which also brings logic to Làzaro’s actions later.

An obnoxious and scrupulous bastard – a journalist - figures out their racket and want’s part of the action. The Valdemar’s refuse which lead’s to Làzaro being tossed in jail facing a lengthy trial and a harsh punishment… until Alastair Crowley [Francisco Maestre] arrives and gives Làzaro a proposition of how they can get him out.

It’s also within the Valdemar family where we see Paul Naschy in his final performance. And it’s a delicate part for the obvious frail actor, who gives one of his most sincere performances. Jervás is all good, there’s not an evil bone in his body and it’s with real concern for the family he has served for presumably his whole life, that he comments and questions the events that he bears witness to.

Safely landing and ending several arcs there’s still several questions posed at the end of the movie, and there’s an obvious feeling that the Valdemar story isn’t ended, but merely a chapter closed, despite the main arc landing in the last act. Subplots are set in motion – like Luisa Llorente’s storyline, Nicolás and Cerviá on that train ride to the Valdemar house, which demand the sequel, and the sequel, demands to be seen. If you do choose to watch this movie, make sure to have the second part near at hand as the teaser for the second movie is will have you drooling.

The second movie takes place in modern time, with the odd flashback to the past woven in and to give further depth to the legacy. Here we see classic horror come face to face with old school Spanish EuroGoth. There’s a subplot with an old witch – and the ultimate Grimoire, The Necronomicon and even an appearance by H.P. Lovecraft [Luis Zahera] who’s woven into the story in a brilliant way. Yes, this is fantasy horror, and you have to accept it, just like you accept Alastair Crowley, Bram Stoker and Lizzie Borden in the first instalment. It works and there’s no reason to question it.

The subplots from the first movie come into play, Lusia Llorente’s capture escape and teaming up with Nicolás who’s been travelling towards this point for the whole first movie. Even secondary subplots such as the assistants – colleagues at the real estate agents - arrive at the house to help in the search for Llorente, but little do they know that they are walking right into a trap. A trap which will make them the 666th victims of the Cthulhu cult intent on bringing their god back to the face of the earth.

Yeah, the second movie takes on a complete different approach than the first, answers questions, picks up subplots and comes round full circle to complete the saga of the Valdemar Legacy.

I love the Spaniards. They have done more for European horror than anyone else has in the last ten-twenty years. A whole new wave of genre directors and movie companies – primarily Julio Fernandez Filmax - have emerged and in my opinion, they have been producing some of the best hits in the last decade.

One thing I find terribly annoying when watching generic horror is that awkward moment when they have to pick up their cell phones and deliver the mandatory “Oh golly I have no coverage!” moment… It bugs the hell out of me. La herencia Valdemar is the like the third of fourth Spanish flick recently where the cell phone has coverage and get’s the protagonist in trouble. Luisa’s cell signal buzzes off and her location is painfully obvious to the monster. Having seen this on so many different occasions now, I’m starting to feel that there’s a critique towards cell phones and the fact that you never really are alone or “out of touch” anymore. Which works great in horror!

Half hour into the first movie I reacted to the line of dialogue “You know what’s going on here, don’t you… how do you expect me to sleep if I don’t know?” – “If I told you, you wouldn’t sleep again for the rest of your life!” It’s one of those lies that completely sell me the movie. That single line made me fall in love with the flick, as it’s sheer concentrated Lovecraft. It’s the sort of dialogue I’d expect to find in his writings and the way it is used here is magic. Lovecraft’s texts often avoided giving detailed explanations of the creatures that inhabited his world, instead he hinted and suggested which left it all up the reader to fill in the blanks… and what ever we come up with is always so much more intimidating than whatever he could have put down in writing.

This is a brilliant flick, a two-parter that brings fear, excitement, adventure and horror to the same arena. It’s like a perfect concentrate of old school Spanish EuroGoth in the vain of Leon Klimovsky, Carlos Aured, Amando de Ossaroio, the Goth of Jess Franco and Jacinto Molina, combined with the new wave of Paco Plaza, Jaume Balugero, Juan Antonio Bayona, Guillem Morales and others. I for one will be eagerly looking forward to seeing where José Luis Alemán goes after this.

Among the extras you will find trailers, making off featurettes, filmographies and a very heart-warming tribute to the late Paul Naschy.

Now if these trailers don't make you want to see these movies, then I don't know what to say...

Thanks for this write up. Never heard of these films before and I'm a big fan of Naschy. I've got some research and DVD hunting to do.