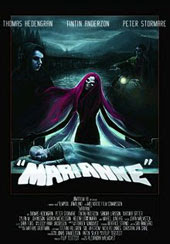 I’m probably going to shatter a few illusions, loose some friends and most likely end up backtracking and being apologetic with this one, as I really don’t enjoy tearing movies apart. In any way you look at it, any movie is after all more movie than anything I’ve made in my two and a half decades of making shitty TV entertainment… But I can't hold my silence for any longer.

Marianne simply isn’t all it is said to be. I see it being hailed here, there and fucking everywhere, receiving praise from each poster tagline poser after another, and that really scares me because there are serious flaws with that movie.

I’ll be the first to acknowledge the fact that Filip Tegstedt has made an interesting movie, it’s a ambitious project which avoids some of the pitfalls that low budget horror/thriller’s usually slip into, but in some places it falls like a ton of bricks right on it's ass, and ultimately into that pit of familiarity. In all fairness though, and as far as Swedish genre movies go, this one does kind of stand out. I’ll get back to that in a moment, because as said, there are some problems with this film.

One- The movie looks terrible; I’m pretty much cringing already as the crispy digital credits fade in and out of the opening montage. This is merely cosmetic style, and movies never will look good to me when shot on the common system camera, if you are a regular reader, you will know of my grain fetish.

Two – the acting is really bad. Really, this is only slightly better than the amateurishly poor acting that inhibits most other Swedish productions from making an impression. This could go two ways, either the director cant direct his actors to perform authentically or they simply can’t act. Unfortunately this goes missing on a non-speaking Swedish audience and that get’s me thinking about all those other movies I’ve seen with subtitles… where they just sucky actors too, was it the power of story that ensnared me, and that’s an uncomfortable feeling. I’m quite sure anyone else who speaks Swedish will say the same thing about the acting, despite it being pretty fucking cool that they got Peter Stormare to take a small but important part in the movie.

Three – it’s not scary. Although it does have a decent atmosphere and I appreciate a movie that goes for a more suggestive approach than cheap scares, tame effects and stale payoffs. It does build slowly and does reach some sort of climax, but it just goes on for way to long and I’m already seeing where it’s going way before the movie culminates.

Four – I found it more complicated to follow than necessary. Too much artfuck, crosscutting and non-linear arcs doesn’t make up for a bad performances, lack of character development and shoddy narrative.

Five – it’s too long, has subplot problems, and is too long. In all honestly there’s too little going on and as mentioned I’m ahead of the movie on several occasions and I find it sloppily edited. Tighten that thing up and loose some of the uncomfortable pacing problems between action and reaction lines. Marianne could easily have lost ten-twenty minutes and still have been an effective movie.

So why am I wasting my time writing about this movie which I didn’t really like, struggled to get through and really resisted writing something about?

Well it’s quite simple really. Despite all the annoyance and irritating flaws – which I’m sure I react stronger to than others because of the fact that I live in Sweden – there is a driving force in the movie which may seem pretty obvious, but at the same time is an ingenious tool at use – Guilt!

If I where to sum the movie up in one word, it would be guilt. This is what the movie is all about it’s what drives Krister [Thomas Hedengran] into his nightmarish state. Yes, it’s kind of predictable, and the non-linear approach to things is an indicator of what is haunting Krister. Or should I say what guilt is crushing him. I’ve frequently pointed out just how effective guilt is, to use a MetaQuote of my own “How the hell do you get a man who is terrified of water to get on a small boat and hunt down the biggest fucking shark of them all…” well that’s the driving force guilt has, it makes people do stuff they never through possible, but it can also be a reason for a characters state. Such as Krister's state. There’s something withheld from the backstory – told through fragments non-linear snippets – but it will all be revealed in the final act. And in my opinion it works. It works because it’s combined with Maran! [The Mare]

I really get a kick out of movies that use their own folklore to tell their stories, because this is where you get to bring something unique to the stage. Trollhunter anyone!? Stuff that isn’t mainstream, meaning that you know all the rules, regulations, tradition and conventions and don't need to think. It brings something new and uncanny to the scene. In Swedish folklore Maran is commonly a female spirit who sneaks into bedrooms at night, mounting the chest of whoever is sleeping in there and thrusts the air out of their lungs. There’s also a pungent sexual tone to the Mara too, men could very well find themselves being sexually molested by the Mara and becoming ensnared in nightmare worlds, and it’s no surprise that the Swedish word for nightmare is Mardröm. As times changed the word Mara became a synonym for asphyxiation, crushing chest pains, sudden awakening from sleep. It’s what we in modern times call an anxiety attack. Such as Krister in Marianne suffers from, as well as that devious Mara…

These two ingredients alone make Marianne worth the effort.

I really wish Tegstedt all the best in future movie making ventures. He’s obviously given some thought to his script, what he wants’ to put his characters through, and pulled it all together through psychology, folklore and old school eeriness. With the buzz going round, I wouldn’t be surprised if he get’s an offer to direct something for a indie studio over there. In some way I’d almost welcome it as I’d enjoy seeing where he goes with some serious resources, creative minds to bounce idea’s off and perhaps a better stable of actors.

Occasionally I feel that the horror/cult movie community - at least the acknowledged big boys of the game - have become so fucking obsessed with becoming the ones to discover the next emperor and his transparent clothes, that they loose focus of what is what. Instead they become a thread of beads, plopping out of a collective anus, where each and everyone cheer each other on, coming up with an escalating rant of praise for something that really isn’t all that great after all.

At the same time I do find some satisfaction in the praise Marianne receives, as every pat on the back this movie get’s, is a kick in the bollocks of the police state movie system in Sweden which keeps movies in the horror genre from being funded and developed. They still shit their pants when you point out that horror (and serious drama re-edited into exploitation flicks) was once the genre that set Sweden on the map, and fucking Bergman didn’t breakthrough because of his light entertainment. He made horror films that explored the darkest fucking holes of mankind, and movies in Sweden will stay retarded if you don’t let them evolve, which needs the funding they deserve.