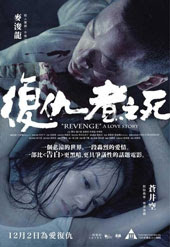 Hong-Kong… it’s been a long time since I saw a good Hong-Kong movie that moved me in the same way that this one did. I sort of drifted away from their movies when the South Korean’s started taking over with their wave of eye-opening movies. Sure, Hong-Kong Cinema will always hold a special place with me, as I grew with Kung-Fu flicks and enjoyed the Hong-Kong children’s show Monkey Magic 1978 like hell when I was a kid. Well actually it was Japanese, directed by among others Godzilla sequel director, Jan Fukuda… but it was about Chinese’s mythology, and when Jeffrey Lau made his Chinese Odyssey films 1994 - bought at on VHS dupes at the amazing backstreet shop "Lisas Smink & Video" (Lisa's Makeup and Video) a week or two after it was out on tape in Hong-Kong, I was right back to being a kid. Not to mention the later revolution of bullet ballet’s directed by Ringo Lam, John Woo and fantasy actioners by Tsui Hark and Siu-Tung Ching at the end of the eighties.

If I didn’t know better I’d have thought that Revenge: A Love Story was a South Korean flick as it shares the same stunning imagery, cryptic narratives, and extremely nihilistic themes as the movies of Chan-wook Parc, Kim-ki Duk and Jee-woon Kim. What ties them together is that no matter how grim the story may be they are all told with the same passionate beauty. Although there are themes that I find recurrent in a lot of hardboiled Hong-Kong action films at play here too, the scenario of the bad cop and the little man out to set things right.

A spoiler free quickfix would read something like this; a serial killer is attacking pregnant women, tearing up their abdomens and removing their unborn children. At first the murders seem random, until the police realize that the killer has been targeting pregnant women related or married to police officers. A band of coppers, obviously a bunch of friends are Rapidly they apprehend their main suspect, Kit [Juno Mak – who wrote the original story and has released several albums of his singing in Hong-Kong] and take him in for a severe beating and interrogation when yet another victim is called in…

Ching-Po Wong’s Revenge: A Love Story is an impressive, touching and haunting movie, which I’m sure will bring with it yet another wave of stunning Hong-Kong thrillers. I welcome them with open arms, because this movie grabs it’s audience in a tight grip and then smacks them in the face with a sack of hot steamed buns as the rush of insight comes hammering down.

This movie stayed in my head all day, and I couldn’t shake it, no matter what. Not because of the rather hard violence, occasional moments of grotesque gore, and really dark narrative, but because of the gentle beauty of the love story that drives the pendulum forth. Yes, love is the driving force of this movie, and damn does it do so in a brilliant way. Kit is head over heals in love with schoolgirl Wing [Japanese former AV actress Sola Aoi] and his love for her knows no limits. Despite his unlimited emotion, he still acts in such a noble fashion that he even leaves the apartment whilst she takes a shower.

After an attempted rape of Wing, Kit rushes to her defence, his actions still can be seen as honourable as he’s doing what the majority of us would Defend our partner. Although the aftermath of this situation leads to a terrifying ordeal, an ordeal which only can result in Kit taking vengeance, a vengeance we too would want but probably due to moral issues never fulfil. Raw, brutal vengeance. But never the less, Kit’s actions are driven by the love for Wing. He need’s to take revenge for the events because of his love for her, and the viewer finds it acceptable it despite the terrible crimes he commits. The audience accepts it as we have a primal urge to see people in love live happily ever after. That’s just the way it is, it’s a human trait we all have. Which is why we become empathetic towards the story of Kit and Wing… even if she goes to extreme lengths to prove her love for Kit too. You won’t believe what she does, but within the context of the narrative it all makes logical sense. This all becomes apparent after a while when the movie starts to retrace its backstory.

Ingeniously told through a non-linear narrative much like that of Christopher Nolan’s Memento 2000 or Gaspar Noe’s Irreversible 2002, what at first seems to be a dark and cold serial killer flick, holds a completely different story when the movie ventures backwards through the backstory that explains Kit’s raison d’etre. A discourse unexpected and one that makes me change my judgment and opinions. A movie that engages and activates its audience.

I really like films that play games with my mind, Revenge: A Love Story, is definitely one of them, as it uses the Doing bad for doing good approach. We know that Kit shouldn’t be committing the crimes, but after that harrowing rush of insight we want him to take his vengeance, and we are somewhat at ease with the way he goes about it. We certainly can’t blame him. Which is a big step away from the first impression we get of that coldblooded killer.

It also uses the love story to justify the violence and the actions of Kit and Wing. There’s an emotional recognition in the narrative, which the audience can identify with. I may not actually murder people for revenge, but I can definitely connect to the emotion of wanting to murder someone who has done me or mine wrong. This emotional recognition makes us empathise with Kit – and Wing – on their journey of destructive vengeance. It’s the same triggers that create the emotional recognition in something like Let the Right One In 2008, and its remake Let Me In 2010, where we want the children to kill their antagonists. We even welcome their acts of violence as long as it results in Eli and Oscar [Abby and Owen] can be together. Yes – take the knife, use the stick, kill them all, let love reign. It’s the same emotional recognition that works there as in Revenge: A Love Story.

The finale of Revenge: A Love Story, may seem cryptic and like many other areas of the film, the interpretation is left up to the viewer. You may chose to read it as a dark destructive finale which lives by the thesis that violence breeds violence, or you can interpret it as a fantasy which takes place in Kit’s mind. This is merely two of my suggestions, and in turn you will have to come to your own conclusions of the movies ending.

If you enjoyed Sion Sono’s Cold Fish 2010 or Jee-woon Kim’s I Saw the Devil 2010, then you have to see Ching-Po Wong’s Revenge: A Love Story. It’s one of the most moving, cruel and haunting pieces of Hong Kong cinema in a long while. Fascinating, riveting, and a complete kick in the gut, Revenge: A Love Story is fucking awesome and original, one of the best Asian movies I’ve seen this year!