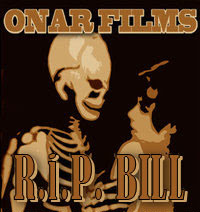 The very sad news on the passing of the patron saint of Turkish cult Cinema enthusiast Vassilis “Bill” Barounis just reached me a few hours ago. I’m still trying to compute it, despite subconsciously understanding that this moment was rapidly crawling its way closer, I was really hoping for a last minute miracle. Bill was a man I associate with miracles, given the many tales of last minute escapes and haunting curses he believed where laid upon him.

Years ago, when I was a young man… yeah like twenty years ago or so in the decade we called the nineties, I used to work at an underground shop that specialized in distributing uncut videotapes. The old letter and a few quid for a catalogue of ex-rentals to Greece was one of the cornerstones of that business. Three men made it possible, Cordas, Alex and Vassilis. I never made the connection that Bill was the same Vassilis until late last year after several years of talking to Bill and his Onar Empire, buying a lot of movies and constructing several advertisements. I questioned his email as it had a similarity to one of the old Greek tape distributors used to have, and the connection was made all over again.

I will always remember Bill with a smile, no matter how down he was, no matter what fate tossed in his face and no matter how beat he seemed, he always came back with an even bigger smile and even more enthusiasm. He'd take a beating, but he never let it break him.

I’ve mentioned before that Bill even offered to go visit my father earlier this year after he took ill during holiday in Athens. This is the way I will remember Bill. The guy who swallowed the hard times and pushed on through, and could offer friendship to people he didn’t even know. If you liked movies, then Bill was your friend, and today I feel that I lost a really good friend.

The world is one eager enthusiast poorer. A re-animator of curiosities we otherwise never would have seen, a warrior of lost cinema, a Pantheon of Yesilcam knowledge. Cineaste heaven just got a whole lot richer, and their movie nights will be so much better now.