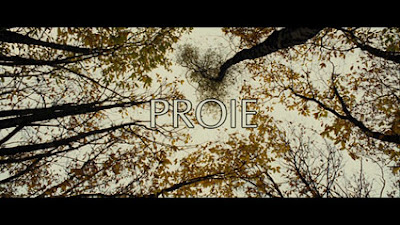 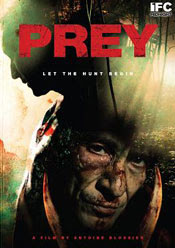 For a guy who doesn’t really like monster animal attack movies, I managed to hit the jackpot as I surprisingly saw two giant wild pig flicks in the same weekend.

One of them, James Isaac’s Pig Hunt (2008), was definitely worth the watch and took a not too original humoristic approach to the material, spicing up the narrative with not only monster boar’s but also stereotype Deliverance hillbilly’s… Antoine Blossier’s Proie (Prey) on the other hand is all about being serious. There’s no room for gags, nods or ironic dialogue, this is all dark, brooding and terrifyingly grim in it’s horror come social commentary bout with the gigantic boar.

Nathan [Gregory Colin] and his pregnant wife Claire [Bérénice Bejo] have just spent a weekend in the countryside at her family home. On the morning of their planned departure, something attacks deer’s in the woods and Claire’s father Nicolas [François Levantal] arrives with some urgent distressing news. The men of the family, Nicolas, his brother David [Joseph Malerba] and their father Eric [Fred Ulysee] all pack up to chase after the wild boar that is stalking their lands, and Nathan reluctantly get’s dragged along. But what starts out as a seemingly easy pig hunt, will soon shift from a hunt to a fight for survival… and the boar’s are not the worst enemies in the woods.

As said earlier, I’m not much of a fan of animal attack movies, but sometimes I do get round to watch them and sometimes they are worth writing a few lines about. I primarily picked up Prey as it was a French flick, and I’m really enjoying the French genre films, and this is very much their take on the wild animal genre, but with that sinister dark European tonality to it all.

The movie starts with an initial attack to set the mood frame. The mystery of the woods is presented when a pack of deer have died as they tried to escape over the electric fence surrounding the Leman land. The huge boar tooth that David finds gives him logic reason to brag about his hunting skills and talk about the size of the boar hiding somewhere out there. It get’s the movie off the ground before the subplot is presented.

There’s an interesting life and death theme running through the movie, especially reflected in the pregnancy of Claire and how both she and her father react to the news when then need Clair to go back into the chemical plant and sort things out. The life of her unborn child is not as important as her loyalty to her father. This is something that her father points out to Nathan several times whilst they are in the woods, and as the movie climaxes it becomes painfully obvious that he was right.

Part of the trick to making me enjoy this movie was in the fantastic subtext. Making everyone around Nathan a complete bastard, yes, even his beloved pregnant wife, the audience obviously empathize with Nathan. He’s the one who reacts to the fact that their unborn child will die if Claire goes back into the chemical plant.

The relationship between Nathan and Claire’s dad, Nicolas, is ingenious, and an important ingredient to making this movie much more than just a “monster in the woods” flick. The tension between the two men is indicated early on when Claire and Nathan talk about their unborn child and when they should tell Nicolas. Nathan makes a small joke about his father in law now officially finding out that he’s been sleeping with his daughter, and there’s unease in the air. This tension is apparent whilst Nicolas reluctantly brings Nathan with him into the woods on the pig hunt, and is amplified when Nathan confronts Nicolas about Claire’s pregnancy and the effects working in the chemical plant will have on it. The two men more than dislike each other and setting them together in a stressed situation with loaded weapons is fascinating as it creates a threatening atmosphere the audience awaits snapping.

You could actually say that Prey more or less is a French version of Spielberg’s Jaws, but set in a forest with a wild boar instead of at sea with a huge shark. Thematically there’s the “misplaced man” trait Chief Brody [Roy Schneider] and Nathan are the same kind of character, both forced into a situation that they have no control over. Brody is terrified of the sea and all that goes with it; Nathan doesn’t like the woods and can hardly handle the hunting rifle he’s handed. They are both in a threatening location, beyond their control. In both movies, a large beast is killed, an uncomfortably large beast but still not the one they are searching for. The big one is still out there.

Both movies keep the monster off screen as much as possible. Sure, Jaws may have been the result of a faulty machine, but keeping it off the screen makes the threat so much more intimidating. Just like the big wild boar in Prey, the less the audience see of the monster, the more their imagination will fill in the blanks and obviously come up with the most terrifying wild pig ever…

The special effects are rather impressive. Not only the recurrent gore, but also the animal effects are really effective and never once do I catch myself thinking “that’s only a puppet”, not even when the band of hunters come upon the rotting carcasses that are found strewn around the lake which is obviously contaminated.

Yes, there is a subtle message in here too. A message to take care of our planet, and not to pollute the fuck out of it. The referents to Jean Rollin’s Les Raisins de la Morte (Grapes of Death) 1978 are not to far away; both movies use the same basic idea, don’t fuck around with nature, and take care of mother earth. Don’t pollute her, because if you do, she will fuck you up bad.