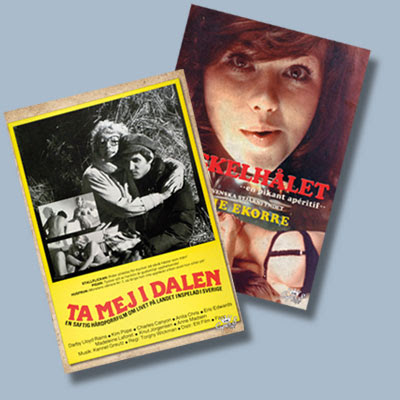 If you like movies in the Swedish Sin fold, then these will be right up your street. Not only is Ta mig i dalen (Girl on Her Knees) 1977 the last of Swedish sexploitation king, Torgny Wickman’s movies - his importance is so understated in the annals of Swedish history - but it’s also a movie that shows the break between kinky soft sexploitation and the start of the deep end. One frisky take on the ways of life on a farm. Think Emmerdale with a healthy lashing of shagging, Yes Emmerdale and shagging, because Chris Chittell, who plays Eric Pollard in British countryside institution Emmerdale Farm since 1984 to now, starred in Ta mig i dalen as Richard.

Chittell appears under the stage name Charles Canyon that he used on all three of the Swedish blue movies he starred in. Ta mig i dalen was the second for Wickman - the first being The Intruder (Swedish Sex Games) against eminent stars such as Stellan Skarsgård in 1975, and Mac Ahlberg’s Molly (Sex in Sweden) 1977 against Marie Forså and Eva Axén… yes the same Eva Axén who get stabbed in the gut in the start of Dario Argento’s Suspiria 1977. See the Swedish Sin is our version of Six degrees of Kevin Bacon, everything in Sweden connects back to the Sin flicks.

Fans of doe eyed starlet, Christina Lindberg, might want to give Swedish/Danish co-production Nyckelhålet (The Keyhole) 1974 a gander, as the leading lady of that movie, Marie Ekorre, is definitely a worthy competitor for the title of queen of Swedish Sin, and here in her first leading role. You may have seen her in bit parts in Arne Mattsson’s still missing from a decent release masterpiece, Smutsiga Fingrar (Dirty Fingers) 1973, or Mac Ahlberg’s Jorden runt med Fanny Hill (Around the World with Fanny Hill) 1974, in which she co-starred as a fashion model with none other than Ms. Lindberg.

I’m happy to see distributor KlubbSuper8 return from a lengthy hiatus, as they are an important part of preserving Swedish cinematic heritage – come on, there’s so much more to Swedish cinema than Ingmar Bergman, and if you are a frequent reader you will know that I hold no grudge to Bergman and the fantastic legacy he left us with, but I do have issues with the shadows he casts upon the rest of Swedish cinematic history.

But where the spotlight really should be directed on these current releases is that the new titles – unlike the previous releases – all have English subtitles so that fans of Swedish Sin outside of Sweden can enjoy the dialogue too! But that’s not all, because if you take the time to go through the extra features, you will find, rare press materials, production documents, short movies, tons of trailers, and deleted scenes! Who the hell seeks out deleted scenes from an old skin flick? Yes, the dedicated troops of KlubbSuper8, and that's the kind of enthusiasm that I can admire!

The release of Ta Mig I Dalen is something of a treasure trove of lost material as they have also assembled the remaining material of Wickman’s never completed 1975 film Drömdoktorn (The Dream Doctor). After finding Wickman’s original shooting script and the uncut original negative, KS8, have reassembled the movie, which was discarded when the camera broke after 70% of the movie was in the can. This painstaking feat took two years of hard work to reassemble, and bring to life. Think about that the next time you rush through the special features on your discs, there’s someone who’s dedicated hours of hard work to get that on there. But it doesn’t stop there, because there’s also three tracks composed by George Riedell and Janne Schaffer.

Nyckelhålet also has its share of extras, not only a remastered version but also enclosed is a shoddy dodgy American grindhouse version complete with trashy film grain and shoddy tracking distortions. But keep in mind friends this is the real deal, no contemporary digital effects tampering, but authentic trashy grindhouse quality. And to make your acquaintance with Ms. Ekorre more pleasurable, there’s the gallery of her gentlemen magazine photographs for you.

Among the last batch of releases you can also find Blåjackor (Sailors) an Arne Mattsson musical from 1964, Bengt Blomgren’s moral dilemma drama Hällebäcks Gård 1961 (with the recently deceased Sif Ruud) where modern technology and lost love cause serious problems on the farm… without people shagging each other.

Finally the last release of this batch is another lost movie salvaged by KlubSuper8, Arne Ragneborn’s presumed lost forever anti-drinking propaganda movie Paradiset from 1955. On the bonus features here’ you’ll find interviews with colleagues, friends and co-workers who discuss just what a badass Ragneborn really was. Of the five movies he directed the most of them ended up being banned as they all dealt with topics like violence, criminality and the ever-popular Swedish pastime alcoholism… you have seen Luigi Scattini’s 1968 documentary Svezia, inferno e paradise (Sweden: Heaven and Hell) haven’t you?

Now for overseas or, “utanför tullarna” readers, I can see that this might be a tad on the narrow side even for you (not the skin flicks of course), but if you do live in Sweden then you should be picking these up anyways because these movies all have a part to play in our cinematic heritage, and if nothing else we should support KlubSuper8 as they have some really interesting titles hidden away for future releases, and we don’t want them vanish before the Dante movie or those fantastic Calvin Floyd movies are released now do we?

I’d suggest that you pop over to KlubbSuper8 and roam their web shop for some great movies filled with superb extras! Go get some!
- October 17, 2011

And yes, Nyckelhaalet has English and Swedish subtitles ;-)

All the new releases from 2011 all have English Subs right?