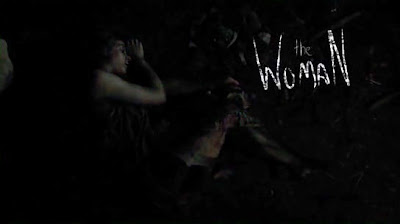 The Woman
Directed by: Lucky McKee
USA, 2011
Horror, 101min
You know that I‘ve been waiting for this one. Eagerly looking forward to what has been predicted as this year’s major provocation. So getting the chance to review this one for my monthly genre column was like a treat for the soul as we start to move into cold, depressing late autumn darkness here in Scandinavia. Was it all I hoped it would be after all this time of yearning? Well not really as I was expecting something different. I thought this would be more brutal and more visual, especially if the reactions of certain festival visitors are to be taken into consideration.
But with that said, I have to point out that The Woman is in no way a lesser movie. In fact I’d say that this is one of the most intelligent and frightening movies since something like Pascal Laugier’s Martyrs 2008. This movie got into my head in an unexpected way and I really love movies that break through that otherwise impenetrable shield built from years of watching genre movies. This one did and that made it one of the best viewing experiences of the year.
Chris Cleek [Sean Bridges], the father of a seemingly normal family, lives on a ranch outside of some unknown city. One day after an early morning start, where his wife Belle [Angela Bettis] hand rolls his smokes, he goes hunting and captures a wild woman [Pollyanna McIntosh]. He brings her home, shackles her to the floor and roof of their garden shed and presents her to his family as their “Project”. To the gasping family he explains his plan to civilize the wild beast. Bang! That’s it, the set up is established, from here on it can only get worse. And it does, in a fascinating way that you probably never expected. 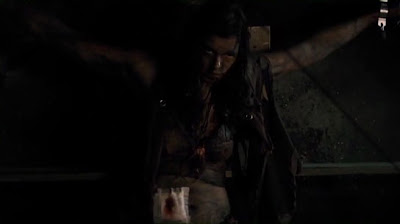 A couple of years ago Jack Ketchum said during an interview with Constructing Horror “If I didn’t offend someone then I wouldn’t be doing my job… this is about violence right?” Well that is a statement that should be taken into consideration when watching The Woman. I’m quite certain that quite a lot of genre fans will watch this movie and then walk away disappointed. Because there is a rather restrained approach to the violence, it’s there, but not as predominant as I had expected. But I feel this to be a good thing. It works for the movie and lifts the film above the average torture flick, which in all honesty, we’ve seen way to many already.
Here the violence is found in the subtext. The things not said, which comes rumbling in with a devastating rush of insight as the climax approaches. A genius approach by McKee and Ketchum, as this is where the mind fuck aspect of the movie comes into play. The feeling that something is wrong, that odd mood which has been fermenting throughout the movie, stingingly slaps you in the face like a cold towel whipped by that bully jock in the school showers. The suspicions that have brewing where correct, this almost weirdly religious cultish family vibe that ha been simmering was correct. This is a family who do live in fear of their patriarch, Chris. Their children are tormented by repressed anger. This is a family on the verge of implosion and we join them just as the pressure cooker is about to burst open. The tension has its most intense grip on the Cleek family.
In a sublime way the introduction of “the woman” into the Cleek world acts as a catalyst for the rise of woman. Her presence on the farm is the cause of wife Belle’s revolt. She takes her first steps towards revolution; Belle also dares speak up against Chris, the women of the farm become active and step up for a first time. Yes, they pay a price, but in the long run you have to ask yourself what would be worse? 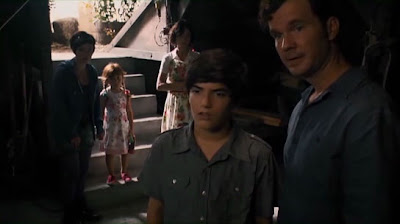 There’s a nasty little theme of voyeurism and objectification going on in The Woman too. The first time it’s almost as a gag, Chris spots the woman in his rifle sight and watches her with a sinister leer on his face for a while before realizing his plan. This is later reflected when his son Brian [Zach Rand], who has prepared the door to the basement with a peephole, watches his father rape the woman. It comes as no surprise that Brain too is soon stood in that basement touching and tormenting the constrained woman. The voyeurism and objectification of The Woman is mirrored in Chris heritage to Brian. We know that Brian will grow up to be exactly like his father, and when the façade finally cracks at the finale, Chris view on women is finally exposed. The charming charmer front falls away to reveal a depraved Joseph Fritzl kind of man who really hates all women, hence his need to captivate, objectify and oppress them. He does it to his wife, to his daughter Peggy [Lauren Ashley Carter], to the captive woman, to the school teacher, and then there’s that surprise in the dog pound…
I usually discuss the ordinary world in genre films, as I find it a vital part for setting a tone, and also important tool to help me into the imaginary world portrayed by the filmmakers. It would be easy to say that the ordinary world of The Woman is the family, the farm they live on and the everyday activities of their life… but I don’t think that’s where the ordinary world of The Woman is… In my book, the ordinary world is presented during the scenes of the woman in her natural habitat before the title screen. It’ is this world where the woman hunts, breeds and lives, at one with nature. She lives in a hole, she is raising her infant child there, she has wolves as babysitters. This is her ordinary world, where everything is in order. It’s when she is moved into the world of the Cleek’s that the balance is shifted. Her ordinary world becomes her nightmare world.
Approaching the movie like this and keeping Andrew van den Houten’s The Offspring 2009 in mind – both movies with screenplays written by Jack Ketchum and featuring Pollyanna McIntosh as a savage woman, and on a geekier trivia note, both produced by Van den Houten, something of a prequel to The Woman – the final scenes see balance reinstated in to the world of the woman. She can return to her ordinary world, back to nature. And in a happy turn of events a family richer.
No matter what you think about this kind of movie, or the horror genre’s gender roles in large, McKee is first and foremost a feminist horror director. His movies have all had a strong female protagonist, which can be seen in May 2002, his episode of Masters of Horror: Sick Girl and The Woods both 2006. The Woman is no exception, and can be read as a critique towards the patriarch system that Chris runs his family. The nuclear family holds dark secrets and it’s the woman who unhinges the door into that dark void. Note that the woman never really shows any fear or pain. She is just a strong, unstoppable force waiting for the exact right moment to pounce and as soon as it comes, she pounces hard. 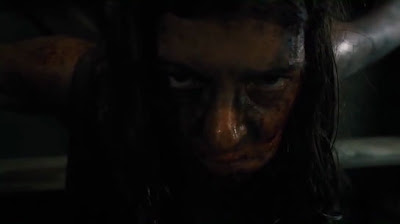 It’s a delight to see the gorgeous Angela Bettis reunited with McKee, and Pollyanna McIntosh has certainly brought a new iconic face to the genre scene. Those shots of her animal face staring into the camera are massive and really break right though the fourth wall. It’s into the soul of the audience she is starring and you know she’s’ a fighter. Someone needs to present McIntosh with an award for her portrayal here, as a beautiful woman who undergoes that transformation for her character, certainly needs to be praised. It’s a great moment that goes against genre conventions, as the victims are more than often picture perfect stereotypes. McIntosh is a dirty, tattered goddess of violence and she really brings a powerful presence to every scene she’s in.
Lucky McKee and Jack Ketchum have created a haunting and disturbing movie that stuck with me for a long time. The Woman is one of this year’s best genre movies. An intelligent disturbing story, pushing a powerful narrative and some outstanding moments of insightful horror. I don’t know what the fuck happened on Red (2008), but McKee is back with a vengeance. The Woman yanked the carpet from under my feet and floored me completely.
Thank god I have the UK BluRay on preorder so that I can go back and watch this splendid movie all over again in a fortnights time.
Here's my fave take on the trailer!
- October 11, 2011

Great review! I had my sights set on this film as well and have anticipated a viewing. Now I have a better idea of what to expect. Thanks for the insight!

"What would I do if I found a Wild Woman in the woods?"

Pretty much ANYTHING but what this guy does.

Nice one. I'll have to try and find this. I've been a fan of McKee since his first film May

@Drymonema: Hope you enjoy it as much as I did. It's a gem.

@Bonjour - Me too! I loved the quirkyness of that movie which is why I'm so pleased that McKee didn't go T.P. on us.