Otto; or, Up with Dead People 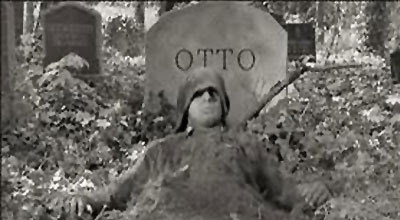 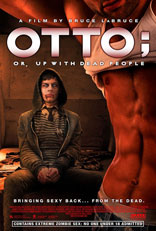 Otto; or, Up with Dead People

My first encounter with the work of Bruce LaBruce was back in the early nineties. I was working in a video store in the middle of the trendy part of South Stockholm. The aim of the store was to make sure that the films the Swedish video stores didn’t supply, such as the works of Fellini, Bergman, Buñuel, Truffaut, Godard, Kurosawa and so on, where available to our customers. But apart from the high end of the backbone of cinema, we also stocked alternative stuff like the ballistic ballets and period pieces of Hong-Kong cinema, South Korean stuff, Russian cinema, documentaries on film and music etc. I brought a whole bunch of alternative horror with me, and created an Italian section. We had a decent selection of classic midnight movies and so on The basic philosophy was pretty much, to stock stuff customers couldn’t see anywhere else, hence. In other words a well sorted oasis for cinema enthusiasts.  Also we where undoubtedly the first shop in Stockholm to have a special section dedicated to movies with gay themes! From those shelves I first made contact with pinku legend Hisayasu Sato (Kurutta Butokai, Muscle, 1989), Curt McDowell, George Kuchar (Thundercrack 1975) James Bidgod (Pink Narcissus 1971) and Derek Jarman (Pick one!). Yeah, open minded, but I also thrived on taunting young lads who came in at the last minute on Friday nights to rent The A to Z of Lesbian Love, asking them if they really where lesbians? At times working that video store was like being in Kevin Smith’s Clerks 1994. But that store also introduced me to Bruce LaBruce’s short films and that’s where I fist saw No Skin Off My Ass. 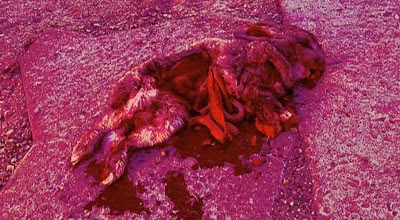 In short, No Skin Off My Ass 1991, tells the tale of a hairdresser [Bruce LaBruce himself] who one day get’s fed up of the harassment he get’s from the neighborhood skinheads. He kidnaps one of the skinheads [Klaus von Buecker] and locks him in his flat where he slowly but surely starts to torment, taunt and break in the Skinhead, until he ultimately converts him to a homosexual. This is a brilliant short, and a definite provocation, which I love. Yes, it’s a gay themed, gritty little exploitation flick, and that’s the key to my appreciation of LaBruce’s work. The photography LaBruce shoots is also very gritty, explicit and at the same time exploitative and curiously erotic – the vision I want to burn into your heads is a leg amputee wearing a gasmask, nursing a gigantic boner… Yes, strange and provocative, but hell, isn’t that why we seek out these damned movies? You see, I will always associate Bruce LaBruce with tapping into the exact same themes that I enjoy in the movies I write about here. Bruce LaBruce is a living legend in my book.

So when a couple of mates invited me to a screening of Otto: or Up with Dead People for their very innovative Gay Horror Themed Film Nights, the choice was easy, I had to go. 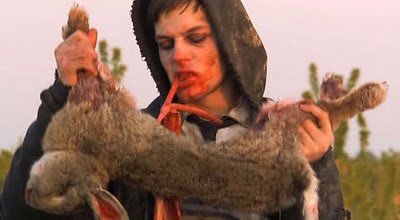 In a nutshell the movie goes something like this: Otto [Jey Crisfar] returns from the dead, to seek something, it’s unclear from a start what it is, but that’s what drives part of the narrative forth - his search. Sub-plots in the form of independent filmmaker Medea Yarn [Katharina Klewinghaus] who casts him in her new movie Up with Dead People a gay themed horror film with a revolutionist undertone, and the state of the nation are also used to create a world going to hell… or was it all just a movie? 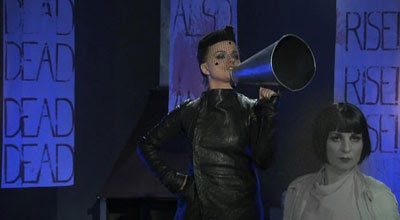 I really like the way LaBruce has crafted this film. At times he’s playing with genre and warping things around on their ass with a Meta critique approach to indie filmmaking. Borders between filmmaking and reality are blurred and the struggle for acceptance, art and independence are told through a zombie metaphor. There are several conventional zombie genre moments, and a few scenes that I’m certain are nods to classic films in the genre.

Symbolically this is a wonderland of metaphors, screw Bryan Singer’s “gay people are mutants” subtext in the X-Men movies; this is where it’s at. Poking fun at the way mankind acknowledged AIDS and HIV, deeming it the Gay Plague, the zombies in LaBruce’s universe have evolved into gay zombies, and they beat the crap out of common man and his regular zombie. 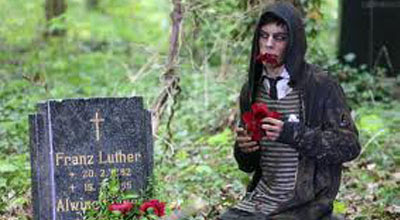 I obvious read the outsider/Zombie characters, as metaphors for gay people still not really being accepted in society – which is fucking unbelievable in 2012! I still find myself being shocked when I read and hear about hate crimes against gay people! Have we come nowhere since Nazi Germany? Otto is an outsider, and wherever he goes he’s never really taken in, accepted for what he is. Even his co-actors and director taunt him because he “thinks” he a zombie… or even worse a “gay zombie”. See, there’s even a pecking order in the gay universe, and what is so great is that the gay zombies are an evolved form of zombies that have come to plague mankind… talk about taking prejudice and running with it. I love it.

There’s a great detail in Otto; or, Up with Dead People that I chose to see as proof that this isn’t just a movie slapped together to flag gay themes and values. I spotted a detail which gave me a rush of insight, and nailed my determination that this is an intelligent movie. There’s a kind of subplot concerning the question if Otto really is a zombie or not, a philosophical question which indicates that there might not even be zombies in the world outside of Medea’s movie. If you watch closely during Otto and Fritz Fritze’s [Marcel Schlutt] carnal encounter at the end of the movie, you will see that the white contacts used to give Otto that “dead” look are missing. Instead his eyes are filled with life for he first time, and perhaps it’s the result of being desired, loved and needed, his raison d'etre if you like, that brings life to his gaze. Being loved is what separates us from the Zombies, and when Otto finds love, his humanity comes shining through. Everyone want’s to be loved. 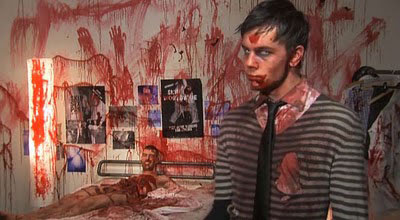 What about gore then? You can’t have a zombie flick without gore… LaBruce know this and uses classic gut munching moments and bite effects to bring the goo. There’s some great moments such as when Otto finds himself in the bedroom of someone who has picked him up for sex, and a fast edit later Otto sits with the same blatant stare, whilst the date lies spread out all over the room as his blood and intestines slide down the walls… and the magnum opus of this film, well it actually only a short scene, but still a magic moment, which I’m still shocked that exploitation fans haven’t discovered – one of the gay zombies, attacks his not yet turned boyfriend, devours his intestines and then finally fucks the stomach cavity! A jaw-dropping scene that made me laugh out loud! 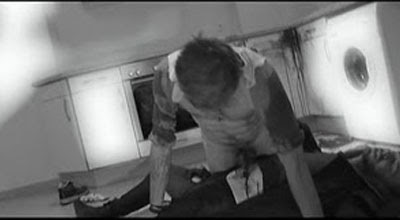 I love movies with a destination, and Otto’s destination is the search for the "thing" he has lost. LaBruce delivers flashbacks to a “happier” life throughout the narrative as Otto starts to figure out why he’s come back. That’s where this movie manages to stay away from cliché, as the meeting Otto has been yearning for doesn’t come to the fruition that he visualizes. Instead it takes a sharp turn and Otto has to fulfil his journey by taking a different path. Hence resulting in a rather sad, but optimistic open ending to a rather fun and quirky story which suddenly took a dark spin. To top it all off, LaBruce builds to a really shocking and fucking heart-breaking semi ending – with a twist – that really shook me up.

Details that are really fun and bring something new to the table can be found in the original character Hella Bent, [Susanne Schaße] who lives in a silent movie. Yes, a silent movie, and each time she’s on screen it’s in black and white, with scratches, out of tune piano, and dialogue written on text cards. It’s a hilarious gimmick, which LaBruce sticks to faithfully throughout the film. The strong emotions of finally finding his goal and the meeting not being a fulfilling as he has dreamed of, and the drive forth as he takes off in search of true love is kind of heart-breaking, and epithetical. Also I really like the paradox that Otto can’t eat meat due to his search for his goal. His hunger for love has him loose all appetite, something that an audience can have an emotional recognition with, because we’ve all been there at one point of our lives. 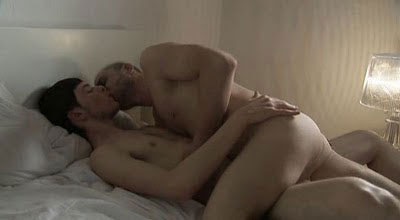 You don’t need to be homosexual to relate to Otto – come on, you’ve seen enough tit’s, muff and ass trough the years, so a dick or two (or more) won’t kill you  - because, I’m certain that anyone who knows how to enjoy a good movie, can have an emotional recognition with Otto as he searches for his reason to return to the land of the walking. Otto; or, Up with Dead People is a sensitive movie, a fun movie, a provocative movie, and I’m surprised that more genre fans haven’t located the film as it does have some really great moments of weird shit. But look beyond the cock-sucking, male smooching, bite hole fucking and enjoy a good campy horror movie. I always come back to the simple fact that it’s all in the story, and the characters. It’s all in the story and characters. 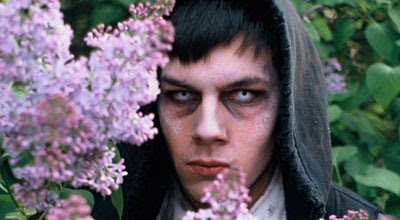 Otto; or, Up with Dead People a magnificent genre-bender with zombies, heart, balls and cocks! Do yourself a favour and check this film out as soon as possible it may just open up your mind?

I had forgotten about this one. Thanks for the reminder.