Graveyard of the Living Dead 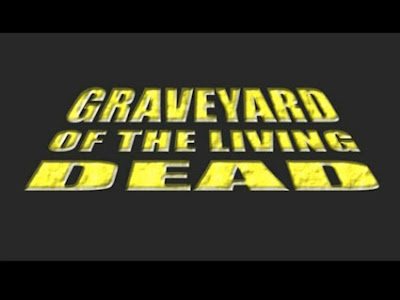 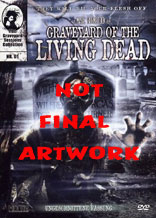 Graveyard of the Living Dead

A mate of mine says that I’m becoming something of a patron saint of German splatter, as I’m always going on about it, and taking up web space by writing serious reviews about those movies. Well what can I say? I like enthusiasm, and if there’s one thing that shines through all the carnage of German splatter films it’s the enthusiasm of the filmmakers. It almost taint’s it’s audience and sends them off into the world with a sensation of felling good after watching a German splatter flick. I’ve previously written on the traits I find associated with German splatter, and they make up a great cocktail of what some may call morbid entertainment. But I find it peculiarly close to the aesthetics of punk rock. Yeah. The philosophy being – “wot’s gonna stop us, pick up an instrument and let’s go”. It’s the same with independent filmmakers, what’s going to stop them? They pick up their cameras and go. Add to that that German splatter film directors and producers are always terribly polite, terrifically enthusiastic and let nothing stop them in their vision of carnage. 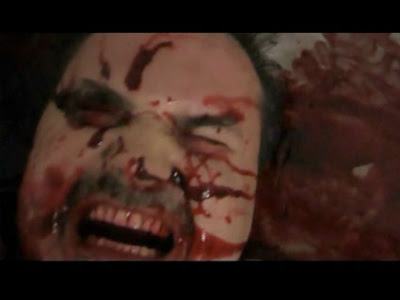 At the Institute für Meizinische Laboruntersuchungen a scientist pushed by his bosses to create a reanimation drug, pushes too far, and it obviously goes terribly wrong.  A bloody carnage takes place leaving the scientist and his boss [played by producer Lars Rohnstock] minions of the walking dead. Fast cut to opening titles and the introduction of characters on their way to be slaughtered. A band of black clothed kids out on a countryside drive, who just happen to take a piss-break right outside the old cemetery on the hill. 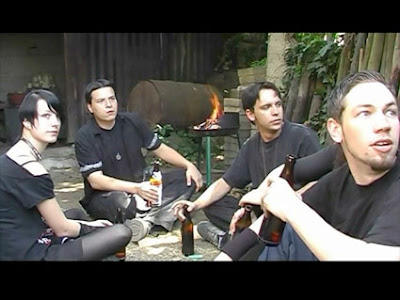 Obnoxious one, Rick [Ramon Kaltenbach who also composed the score for the flick], is the first to go and so far it’s all pretty straight forward. Zombie shuffle, zombie grab, girls scream, guys try to run, zombie chomp, guts and goo a go-go! Then the first of several small quirks, which work in favour of the film kick in. The gang fight off the undead and run to safety in a small shed… The shed being a problem as they now are trapped inside whilst zombies ferociously pound on the door outside. The dilemma being that both Tom [Played by writer/director Marc Rohnstock] and David have been bitten, David so serious that he’s unconscious. Knowing their zombie lore, they know that time is precious. 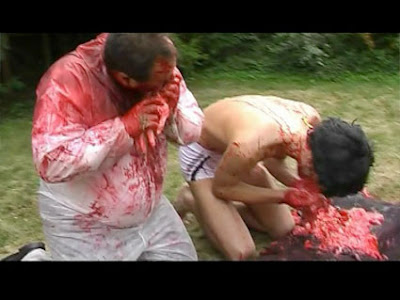 Unlike many other German splatter films, there’s not much comic relief in Graveyard of the Living Dead, which makes the cynicism and irony stand out so much more. The simple irony of life, the things we moan and complain about everyday, those “oh why does this always happen to me…” moments. Which is why we laugh when they find a chainsaw, only to realize it’s empty of gas. The band of mates flee into the cemetery and start fighting off the zombies, which produces fountains of blood and gore which drenches the ground below the infected beasts. The kids leave the battle as victors and the story could have ended here… alas nay, before they have had time to return to the humble shack and fetch still unconscious David, the blood of the zombies seeps into the soft soil of the cemetery and resurrects the living dead. 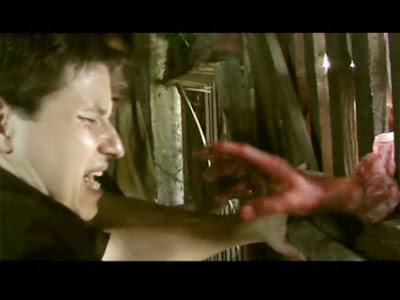 This is where the film get’s groovy, turn on the smoke machines, lay down the Misfits sound-a-like beats and let the dead rise from their shallow graves… Oh and one of them seems to have lost her shirt. What is it with naked zombie chicks that get’s me all worked up? Survival horror starts now!

There’s a morbid cynicism to the film as Tom is bitten early on when they try to save Rick. If there’s one thing everyone knows about zombies it’s that their bite turns their victims into one of them as the infection is transmitted through bodily fluids… wait, hold the naked zombie chick fantasy for a moment. This is the kind of cynicism I’m referring to when I call it a trait. Sometimes I have a problem getting into zombie films as they frequently end up walking that very nihilistic doomed ending path, hence resulting in me not really caring about the characters, after all they are all going to die anyway! Unless they are well written and manage to draw me into their story, which will have me empathise, and invest in them, giving the result that I will give a damn. In some way I can say that the Tom character is what makes it interesting. There’s something captivating in that “I’m doomed, but I’m going to fight for my own, and your survival as long as I can” persona. It’s what I sometimes refer to as dimension within a character, even if it includes going out amongst the undead, siphoning petrol from your own car so that you can fill up the chainsaw and get some serious mayhem as you massacre your way through the undead in the final act! 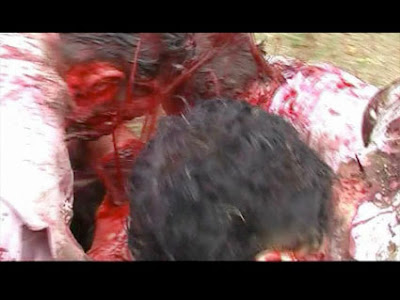 Back to that punk rock aesthetic; I really love the way the movie is shot, away from the dark of night, the fog of customary. Instead it’s shot in the bright sunlight! So everything is clear to see, no blurry dark basement special effects, it’s all out there in the light of day for you to see clearly. Effects are cheap; acting is so so, camera work is good enough, but just like punk rock, it doesn’t really matter how well produced your track is, as long as it delivers. Graveyard of the Living Dead delivers, just as a three-minute shit kicking punk track delivers, it delivers an eighty-nine minute gore drenched shit kicker.  Graveyard of the Living Dead is a punk rock bloodbath, frantically spitting and stomping untill the last frame. Decapitations, intestine grappling, headshots, fountains of blood and everything that comes with the territory including some surprise jump scares, a cameo appearance by Timo Rose, and a shocking last minute twist that you will never see coming. 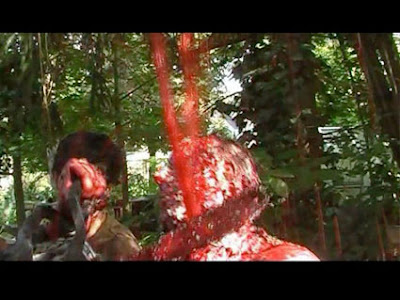 Ramon Kaltenbach and Martin Rüdel’s score does what it’s supposed to do, but for me the big kick is the many psychobilly / horror punk rock bands in the vain of Glen Danzig’s Misfits that are a treat. Bands like Blitzkid, The Other, Godforasken, and electro band Blutzukker. They bring a high production value to the flick and I’m still singing The Other’s Beware of Ghouls as I write this. 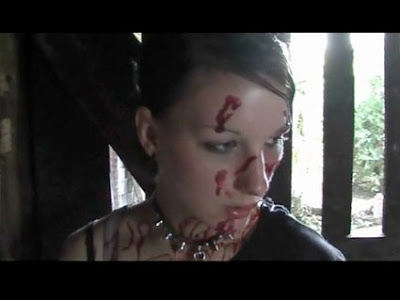 Kudos to Dark Entertainment who in this constellation, and previous incarnations of their lable, have always been prone to distributing the real, real indie productions of the world. Without them, I'm sure a lot of the movies in their great back catalouge would never have been released at all. If you are attending the Weekend of Horror's in Bottrop, Germany in November, make sure to drop by their stall and pick up a fist full of their great releases!
Included on the disc is the Rohnstock brothers 2008 short film Dark Awakening. They followed up Graveyard of the Living Dead with the magnificent Necronos : Tower of Doom 2012 also available from Dark Entertainment in it’s complete uncut glory.