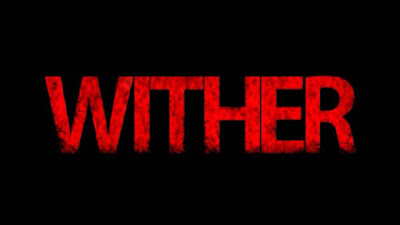 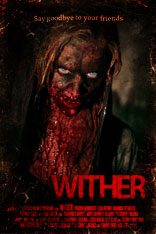 Screw the Evil Dead remake, (which probably will be awesome); this is the one you need to pay money to see in a theatre. Why You ask, well simply because we need to make sure that more independent horror films get made, distributed and screened in this country. (As in Sweden, where I’m located). Fellow fans of genre cinema who reside overseas, (or neighbouring countries) may want to keep an eager eye open as this movie may very well be the start of Sweden’s own franchise much like the success of Norway’s Fritt Vilt (Cold Prey) movies. 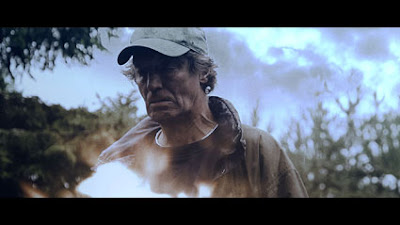 A lone man, Gunnar, [Johannes Brost] walks through a dark, rainy Swedish forest. One can sense the cold dampness that encloses him. He’s almost in a panic as he calls out his daughter Lisa’s name. He continues to walk and is close to breaking down, when he spots someone crouched over what might be Lisa! They could be making out, if not for the blood! The person turns around, looks at him with pale, dead eyes, as gore pours over its teeth and out of its mouth. Gunnar raises his rifle and shoots the being in the head, but seconds later, and despite a gaping hole in the back of it’s head, it sits back up and snarls… 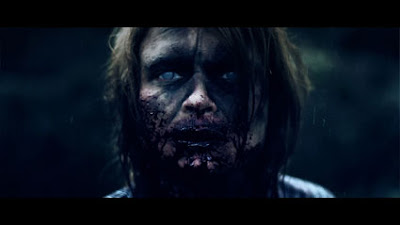 This is the initial attack which opens Wither, a Swedish horror film in the vein of Rec, Demons, Evil Dead and every damned generic cabin in the woods horror setup that you have seen so far. It was bound to happen sooner or later – Hugo Lilja won acclaim for his Dramatic Institute graduation short Återfödelsen (The Unliving), writer, director of the magnificent Psalm 21, Fredrik Hiller, has been trying to get his post apocalyptic zombie flick Zon261 off the ground for the last few years, (fingers crossed it will happen soon), and there’s even been a slapstick comedic, reality show meets Zombies, aired on Swedish TV in the past year; Den Sista Dokusåpan (The Last Reality Show). So the fact that Sweden finally has their first demon/zombie flick and that it’s going to play theatrically, is a welcome one. 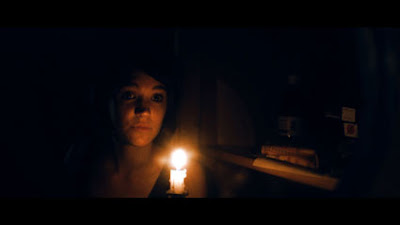 That’s why getting the monster in the initial attack does a lot to set the tone:  dark, violent, gory and perhaps most importantly the antagonist. Horror lives off its monsters, and presenting a strong, almost unbeatable demonic zombie at the very start of the movie is a rare thing in Swedish genre. More than often, budget restricts filmmakers to keep effects at a minimum, and keep them until the last possible moment. So this is an awesome initial attack that will set a great tone from square one, giving the audience precisely what they are there for, shocks, gore, and horror! 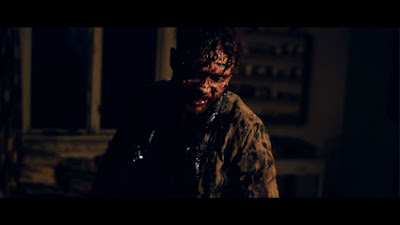 Following an illustrated credit sequence telling the genesis of the “entity”, we are introduced to the lead characters, Albin [Patrik Almkvist] and Ida [Lisa Henni], as they sit at his parents dinner table talk about an abandoned house in the woods that the two kids are planning on taking a trip to with their mates. The eight friends – hot chicks, cool dudes - are rounded up en route to their destination, and it all plays by the book as we learn who’s who, who fancies who and where they stand in the group of friends. Keeping the Swedish tone to it, they obviously talk about the amount of booze they are going to consume during the weekend, if it would have been American, they’d have started rolling spiffs, and passing them around. They reach the house, settle in, have a quick snog and start downing the drinks. The table is set, time to shift gears… Moments later one of the chicks pees blood, starts bleeding from her mouth, goes apeshit and savagely tears the lip of one of the other girls. We’ve been around the block before, and we know that the spreading of the disease has only just begun, and the shit is about to hit the fan. 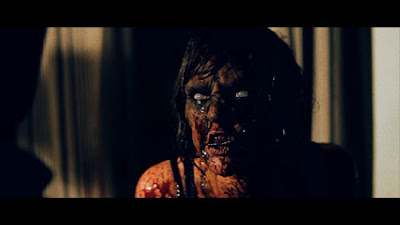 Where the movie up till now has played along the lines of convention, Scandinavian folklore comes in handy when putting a special spin on things. It’s a well used device that Scandinavian filmmakers are turning to more and more, Trollhunter, Marianne, Thale to name a few. Well Wither perhaps doesn’t tap into actual folklore, but it uses folklore to create an own mythology of their monster.  Evil forces that live under the ground, when you disturb them they take your soul and bad stuff happen. Oh, did I tell you about the trap door that leads down into the soil-floored cellar and the thing hiding in the shadows? 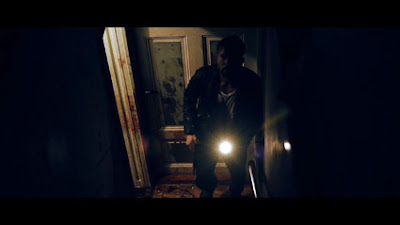 Without trying to be smart-asses, directors Sonny Laguna, Tommy Wiklund and co-writer David Liljeblad’s passion for the genre, and knowledge, shines through on several occasions, and it also brings an ardent enthusiasm with it that is rare these days. A lot of films run on autopilot and by the book. Wither may be somewhat generic, but it still blows the competition on the home arena way off the map. It’s a testament to the fervour of independent underdogs who make exactly the movie they want without any meddling from external parts. 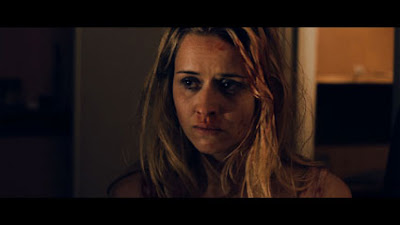 As said the setup and main narrative of Wither may not be altogether unique – then again what is these days, and I doubt that’s what the guys behind it where after originality either – but when the possession starts, and the second act picks up the pace, it really pounds it in from there on out. The last forty minutes are generic horror at its best, ferocious, intense, and could easily compete with a lot of stuff that comes in from overseas. Wither get’s in there, does its job and winds up tension as the fantastic special effects kick some serious ass. The SFX crew need to stand up and take a bow, as Swedish horror fans hail their work! Goes to show that Yngvie Malmsteen was right when he said “How can less be more? More is more!” At the end of the day it doesn’t’ matter what flaws you may spot, because it’s a fast ride, a delightfully creepy one, and certainly the most violent and gory horror flick ever made in Sweden. I welcome it with at least one open arm, as the other one has to shield my eyes from the bloodshed on screen. 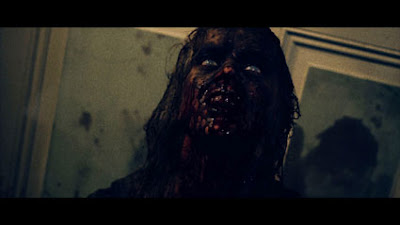 My favourite pet peeve with this movie is that it uses cell phones in the middle of the woods, and against all odds – they fucking work! They also get used in a brilliant way when they have to locate possessed friends, and I love these guys for that decision. It’s great to see Johannes Brost making a return to the genre scene as he was in the legendary Besökarna – one of the Swedish horrors that really does rely on the Less is more theory, just like the smash hit Låt den rätte komma in (Let The Right One In) a few years back. Brost holds a classic helper role in the film, but even helpers have some bad days too. 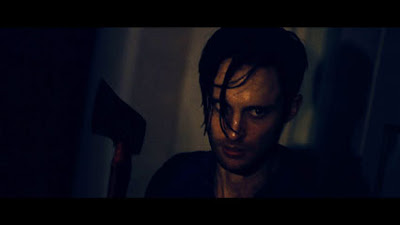 But compared to earlier attempts at making entertaining horror in Sweden, Wither is an impressive feat. It boasts what definitely are among the best special effects ever put on screen in Sweden. Prepare to be nauseated; Wither is one graphic and gory little bastard indeed. If you came for a blood drenched graphically violent horror film, then you are in the right place.

Wither will hit Swedish cinemas early 2013, and should probably reach DVD a few months after that.

Looks Great! Thanks for putting this awesome looking flick on my radar. I'll be keeping an eye out for it, for sure.