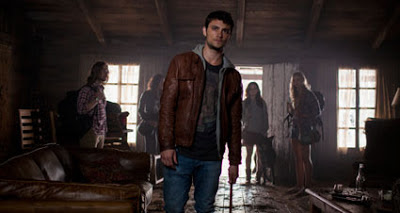 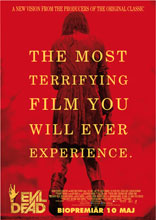 What’s up with all kids in US horror being recovering junkies these days? Ok, never mind, here we go and let’s start out with a quick fix to establish characters and stuff. Mia [Jane Levy] and her friends have gathered at the cabin in the woods to help her kick her dirty drug habit. Her alienated brother David [Shiloh Fernandez] swears never to leave her and they all start their happy quest to help Mia go cold turkey.  Briefly into detox Mia starts to seriously complain about the foul stench and hey presto they find a trap door leading into the basement. Eric [Lou Taylor Pucci] and David venture into the hole whilst nurse Olivia [Jessica Lucas] and Natalie [Elizabeth Blackmore] await upstairs with Mia. Downstairs in the murky dark cellar the two chaps find not only the remains of loads of gutted and stung up cat carcases, but also a book wrapped tight in a black plastic bag and barbedwire. Guess what it is?  Ok, we don’t really need to take it any further than that. It’s Evil Dead, you know it – or should know it by heart. From that point on some serious demonic possession kicks ass, goo and gore splash all across the screen and the audience is left breathless at the end of the ninety-one minute run. 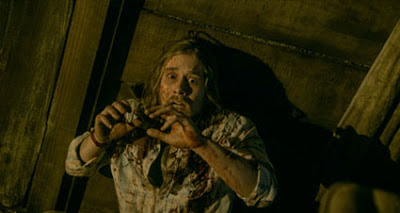 In the pre-build to watching this new Evil Dead film I re-watched the original. Yeah, I know, possibly something of a bad move before seeing a remake, but I have always recalled Sam Raimi’s The Evil Dead films as more horror comedy than horror scary, and during the course of all the interviews I’ve conducted with filmmakers last year, a majority claim that Sam Raimi’s The Evil Dead was the movie that made them want to get into filmmaking. So I had to watch it, and Oh boy has time deceived me. The original film was certainly much grimmer than I remembered it and suddenly all those censored versions made sense… where I’ve previously said, “What the heck is there to censor in The Evil Dead?” I now went, “Whoa, no bloody wonder this thing had problems getting through the censors!”

With that in mind, I stepped into the preview of Fede Alvarez take on Sam Raimi’s The Evil Dead… the one that proudly has boasted that’ it’s cutting the comedy and going straight for the kill in one of this years supposed best horror films. 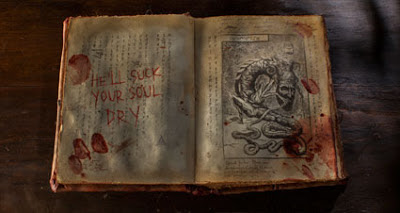 True, it does go straight for the kill. Even before the opening credits we are presented to a grim initial attack that even in its short form plays with what to expect. Then again, we’re all fans of the original, so we know what to expect. Roll the credits, send in the new flesh. Filmmakers are getting better at playing off audiences empathy for characters the Fede Alvarez/Rodo Sayagues screenplay (based on Sam Raimi’s motion picture, The Evil Dead) manage to win a few points with a family torn apart, mother with history of mental illness, sister with drug habit, brother with abandonment issues subplots hidden away in the backstories. Oh, and the horror genre’s BFF, Guilt, is very present too. David has some heavy guilt issues that make him go to some grueling lengths to rid himself of that guilt of haunts past. Although despite this I’d say that there’s not really an Ash protagonist to cling onto… which may be something of a problem. There are two, three very obvious characters to cheer for, and a last minute switch which shouldn’t work but does work that gives a final grab tight to the armrests of the chair in the dark when the shit hits the fan kind of character… but it’s not as familiar or close to us as Ash.  I need a person to identify with to make it an investable journey. Hell, that’s why Ash is such a cult icon. We could identify with him in all his klutziness. 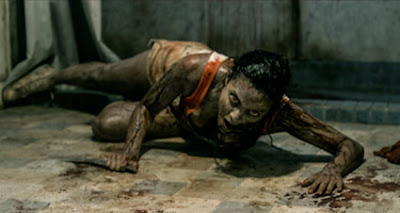 There are several nods to the original film, sometimes as lines of dialogue reused in a kind of new context, sometimes in pure visuals and yeah, someone on the production had the great taste to include a 1973 Oldmobile Delta 88. Nice one! The movie blasts forth without leaving much space to catch your breath and the film is a gritty, raw, adrenaline rush of a movie. And I guess they where right to some extent, this is possibly the most fun you can have being freaked out in a dark cinema so far this year!

But now for the tricky stuff…  It’s Evil Dead, the third out of four films that more or less plays along the exact same beats as the original two, so I know pretty much what is going to go down. Sometimes remakes become checklists of what they used from the original and what they didn’t. Sometimes they check the list off perfectly sometimes they miss key moments. Almost all the classic moments are here but in new guises. Oh, something great is that Alvarez never even bothered to talk cellphones. There’s never any discussion and we never have to reach that awfully insulting “Oh no coverage” moment. That’s worth a lot for me. 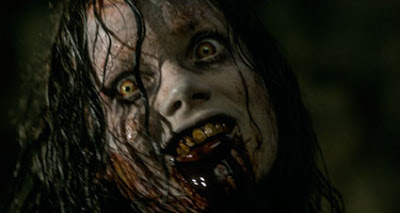 Ok, Effects, well hell yeah it’s an Evil Dead movie there has to be special effects, loads and loads of outlandish special effects and they deliver en masse. The only problem I really have is that the possessed have become so god-damned mainstream that all possessed look the same! Remember the first time you saw The Evil Dead or Evil Dead 2 or Army of Darkness and just how impressed – or freaked out - you where with how the possessed looked! Well to be honest all that originality has become convention. The possessed – despite succeeding in freaking out the audience – in Evil Dead look like the possessed in every possessed film for the past couple of years. Hell I’ve even seen chicks as horror conventions sport the exact same look, even the possessed in Swedish “evil deadish” flick Wither that hits cinemas after the summer look like this! So I was kind of bummed by that, and then there’s a real REAL huge curveball tossed at full speed into the face of the audience during the last act that actually kind of lost me. It yanked me completely out of the movie - let me explain. Back in the day, we could watch horror, extreme horror and all that kind of stuff because it was at the same time pretty comedic in its exaggerated approach. Anything could happen and did happen, and things got gory and violent as hell, but it worked because it was all kind of naïve and over the top. Remakes and genre today generally tend to go for a more realistic approach and a darker more gloomy tone. Gone is the comedic relief and instead there’s only hard realistic violence. So when this moment comes around it was kind of out of place. It didn’t suit the rest of the universe that the film had built. You’ll know the moment when it comes, and I’m sure you will react the same… But thank the devils underground and all things sinister that Alvarez fixes his way out of that situation by delivering what may be amongst the most intense and blood drenched last ten minutes of a horror flick ever! It really just goes absolutely insane and that makes up for any flaws I was thinking of before this spectacular finale unleashes 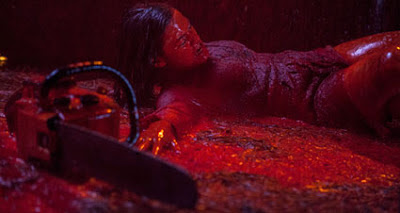 So the short answer is Yes, despite some small flaws, Fede Alvarez’s reworking, rebooting or whatever the hell you want to call it, Evil Dead did leave me with a big dumb grin on my face. So it certainly works, get’s the job done, hits the right keys and proves that Fede Alvarez isn’t messing around. He’s here to make an imprint, first with that awesome CG Sci-Fi short, now with Evil Dead. It may not be the most terrifying film I will ever experience as the promotional materials boast, but it certainly is wild, ferocious, definitely hit the beats at all the right times, has some fantastic effects, and entertained the heck out of me, and again, those last ten minutes are so intense that they will drive you completely insane!