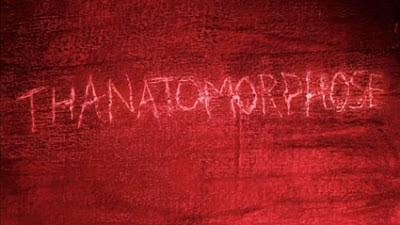 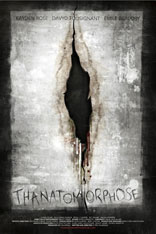 
A young woman [Kayden Rose] is trapped in the destructive circle of life… She has an abusive boy friend, she leads a boring social life, she sufferd from lack of enthusiasm and a meaningless extra job. They all add to the feeling of being trapped in an inescapable wheel of circumstance. Wanting change in her life, she get’s more than she bargained for when awakens one morning only to realises that she’s slowly rotting and becoming a living corpse. 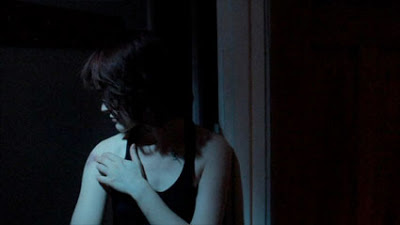 Thanatomorphose is a hypnotic film. Dark, dreamlike, deviant and cryptic - this is a film that takes its audience into hell… without coming back. Split into three chapters Despair – Another – Oneself, Thanatomorphose follows a young woman as she slowly descents, decomposing, becoming a living corpse and beyond. It moves at a slow pace – but never becomes dull – as long shots linger on the events portrayed, it brings a realistic atmosphere to the film, as it almost becomes a documentarian gaze. 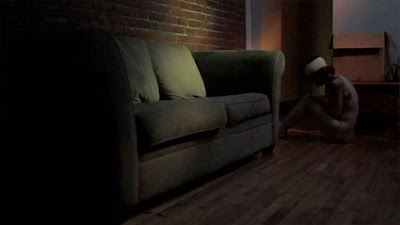 There’s a strangely poetic tone to Thanatomorphose, as the young woman slowly finds her freedom the further she falls into her decent. It’s when she is freed of her external features and attributes as a woman that she manages to free herself from the male gaze and hence gain her true freedom. Weird but beautiful and perhaps one of the reasons why this movie despite it’s disturbing visuals and provocative narrative is so graceful. 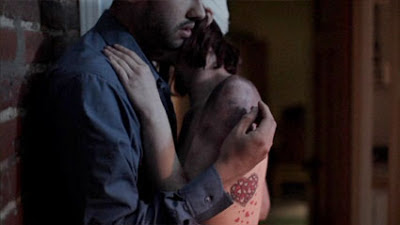 Female Sexuality is important in Thanatomorphose. Both from the protagonists view – the lead female character of the film, and from her antagonist’s – i.e. the male counterparts point of view too. The men have a high sexual appetite, but the woman does too. The men crave her, and in their world she’s simply an object of desire. She doesn’t really mean anything to them as the opening scene shows. Mere moments after being intimate, her boyfriend declares that he doesn’t intend spending the night there. He cuts his foot on a protruding nail and starts his abusive rant, blaming her for his misfortune. He exits the apartment and leaves her alone. Later in the film a “male friend” tries to seduce her during a party, some even later the woman performs oral sex on him. Despite her being in her state of decomposing, they follow through, only to have him rush out of the apartment upon ejaculating. The Woman is merely an object in the male world.  Although it’s perhaps her Own sexuality that is the strongest, as she satisfies her own needs on several occasions even whilst she decomposes. At the end of the day, her desires and lusts are the ones that control the men around her. 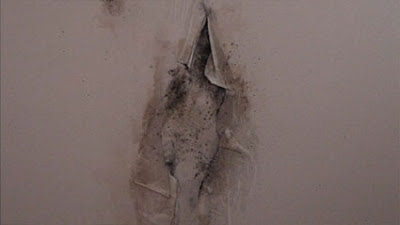 A crack in the wall acts as a metaphorical gateway, a gateway that at times looks like a symbolic vagina, a gate way to hell, a gate way to death, but also a gateway to freedom. But when passing through this gate way the woman becomes free. Men are not really of any use to the woman either. The sexual acts she engages in with them are almost acts of sacrifice, as they don’t really fulfil any of her needs. 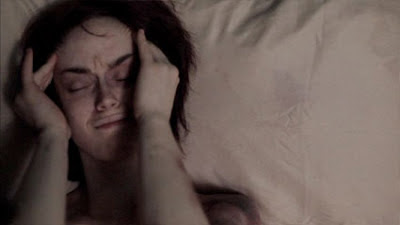 She masturbates after her boyfriend has left the apartment and continues this act of self-pleasuring on several occasions through the film. Cries of ecstasy are mixed with cries of death… Life and death climax together constantly through the film, and nowhere is it more clearly than when she masturbates even through she’s a rotting corpse. A symbol of life and lust wanting to defy death, it’s an uncanny act of self-necrophilia. Éric Falardeau leaves some truly disturbing images with the audience that confuses me as to whether I should be feeling aroused or repulsed! 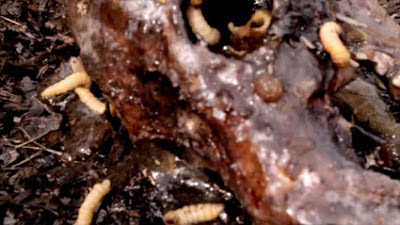 There is something morbidly beautiful and bittersweet about the fact that the further she falls into her grotesque state, the less of an object she is for the male counterparts. Ironic, and possibly kind of a metaphorical statement on the ever-infected objectification of woman discussion, and the blame game that follows after each harrowing case of abuse. 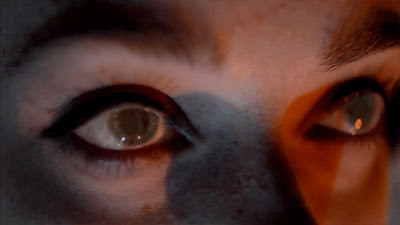 Human curiosity, or perhaps I should refer to it as genre fan curiosity, keeps me wanting to see how far Falardeau is going to take things. A situation not too unlike that of Pascal Laugier’s Martyrs arises, where I want the woman decay faster so that I can see what happens, how far it will go… will there be a miracle ending or a devastating climax.  This is what makes Thanatomorphose such disturbing, captivating and emotionally strong film. This is a powerful movie, and body horror hasn’t been this grotesque since David Cronenberg and Jörg Buttgereit stopped operating in that area. It should be pointed out that lead actress Kayden Rose gives a hell of a performance, it’s a challenging part that she holds and she makes it work perfectly. 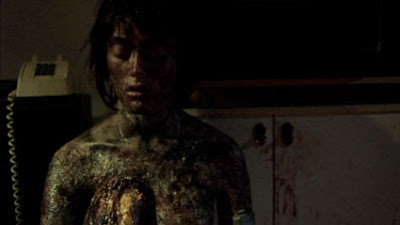 The path through Thanatomorphose is heavily paved with some spectacular special effects courtesy of Daniel Scherer - who worked with Richard Stanley on his Mother of Toads segment for The Theatre Bizarre 2011, François Gaillard’s Blackaria and Last Caress 2010 and Hélène Cattet/Bruno Forzani’s forthcoming L’étrange couleur des larmes de ton corps (The Strange Color of Your Body’s Tears ) - and just let it be know, that body fluids are key word in this film. Sweat, blood and tears, and all from secretions associated with carnal pleasures to the discharges connected with putrefying flesh and death. Oh, and maggots, loads and loads of maggots. Scherer’s special effects are fantastic. They are so slimy, gooey, maggoty and realistic that you can almost sense that sweet and sour odour of infected flesh, sore with yellow pus and putrid mucus that oozes and pulsates on the screen. 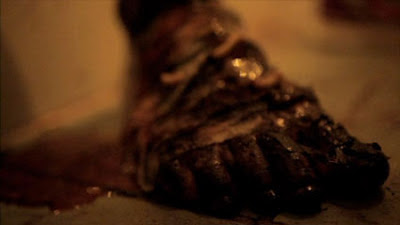 Thanatomorphose is a tight and claustrophobic chamber piece all taking place in the same tiny apartment.  It’s a film that, thanks to it’s slow pace, snares the audience in a firm grip. There are no jump scares, but it is filled with haunting moments and bursts of horrifying violence. The awesome special effects take me back to old school of Euro Horror and eighties gore, and the dark cynicism of contemporary genre cinema lays as a moist blanket of despair over the piece. Thanatomorphose is a fascinating and grotesque deconstruction of gender; female suffering has never been as poetic as this. Thanatomorphose is cult cinema in the making!