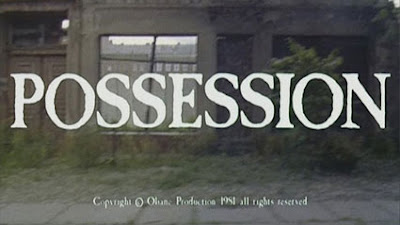 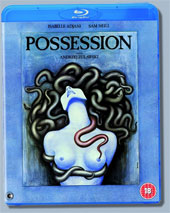 There’s really only two ways to watch Andrej Zulawski’s breathtaking and mind expanding, monster metaphor movie, Possession – either you love it or you hate it. This is possibly THE film that polarizes its audience and so it should, with it’s sluggish pacing, manic acting and gob smacking horror twist. Andrey Zulawski’s Possession is a masterpiece of art-house drama molten together with gooey tentacle monster in horrific body horror! 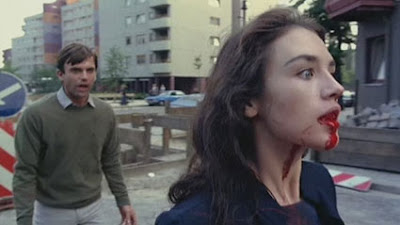 Alienation is a key to Possession and Zulawski puts this all up front as the film opens with a harsh scene of rejection. Mark [Sam Neill] returns home from a journey abroad only to be met on the street by his wife Anna [Isabelle Adjani] who proceeds to tell him that she thinks their relationship is over. This is followed by scenes of the couple discussing the fact that they don’t really have any sexual feelings for each other any more, which leads to the reveal that Anna has been having an affair with another man… or at least that’s what we think so far.

Mark becomes obsessive in his determination to keep the family assembled (consisting of him, Anna and their young son Bob [Michael Hogben]) and going through the motions, he shouts at her, fights her, throws himself at her feet, submits to her, all without result. Mark descents into a deep dark personal space as he fights for what he believes is true happiness, fighting for a memory of something that no longer is.

Looking at Possession from a storytelling point of view, it’s a rather interesting film when it comes to the lead characters – keep in mind that this is early eighties, and the nihilism of today’s genre films was decades away – so it’s something of a fascination that Zulawski keeps his lead characters somewhat inaccessible to us. Neither Anna, Mark or Heinrich [Heinz Bennet] are sympathetic characters, so I don’t really root for any of them, they are all quite unlikeable, egotistical people completely coming apart at the seams, all by their own hands. 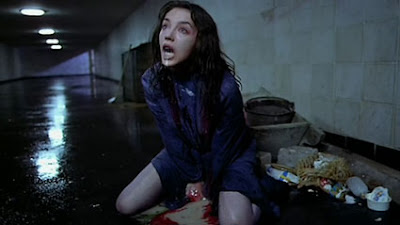 The only person that really is a likeable and empathetic character is schoolteacher Helen [Adjani in a double role] who plays an important part in Mark’s catharsis! In her own way a metaphor for innocence and the corruption of same innocence... Oh, and watching Possession again after quite some time, I also feel that there’s a pretty cool and subtle message in there concerning the two private investigators [Shaun Lawton and Carl Duering] and their relationship!

Secrets. Yes secrets, dirty secrets. Zulawski lures the audience down a deceptive route as Mark learns of Anna’s dirty little affair on the side with Heinrich. But he certainly doesn’t stop there, but Anna has yet another affair outside of her affair with Heinrich… the rush of insight when one realizes what has been going on is powerful, and both men become completely obsessive. Only one of them can have Anna, and nobody want’s to let go of her, in a way it’s Anna who has who has possessed the men and they will stop at nothing to have her. Even the before mentioned detectives have their “secret”. Anna’s creature, the shape shifting homunculus that she hides in that damp murky Berlin apartment is her dark secret, and in some ways it also becomes Mark’s when he learns of it.

An important part of Possession is the constant disorientation. Multi award winning cinematographer Bruno Nuytten’s work here is fantastic, but the way the scenes are edited together, one rarely comes to insight in how rooms or locations are connected, this despite several splendid steady cam shots and flowing long in and out of location moves. This adds to the mental confusion of the piece. It’s also really important to watch how the shots are composed, as the way Adjani and Neill move and place themselves in the rather long and demanding shots are like watching strictly choreographed dances. The way the camera lingers and keeps us at distance is also part of the earlier mentioned alienation. Even the audience is held at arms length from everything.

Emotionally the film grinds down it’s audience and becomes a surrealistic nightmare perfected. There are no release valves and tension simply builds, on both the character levels and on the monster levels before reaching it’s devastating climax. Neill gives a great performance as the devastated Mark but Adjani showcases some outstanding talent as she with perfection slips between the many emotions and states of mind that Anna displays. 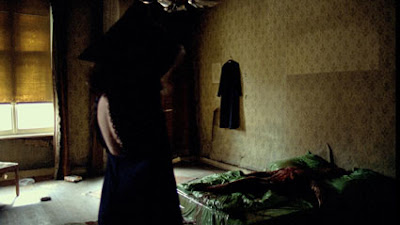 The monster. We can’t really talk about Possession without talking about the monster, metaphorical or not. Pocketed between two academy awards for his on Alien 1979 and E.T. 1982, Carlo Rambaldi's creature of Possession is a repulsive and magnificent one, kept off screen as long as possible and when it’s revealed we never really get a clear idea of how it comes together… it’s all slime, ooze and tentacles as the creature feasts off the blood and flesh of the poor victims Anna brings to their shared secret lair, and despite being a mix of Lovecraftian elder and total nightmare beast it doesn’t stop Anna from being intimate with the slimy monster. It’s a fantastic monster and is used in the perfect amount of screen time, any more and we would have been able to start looking for the wires, rods and any other revealing pieces of trickery. Once that monster is seen the fact that Anna is pregnant with it’s child evokes some haunting mental images, but nothing as surreal and disturbing as what Zulawski, Rambaldi and Adjani conjure up in the subway miscarriage scene in the second half of Possession. This is the concentrate of nightmares indeed!

Possession works in two ways, one as a metaphor for the disintegration of the Mark/Anna relationship, which is presented in a gut-wrenching fashion as the couple slowly, slowly, disintegrate and come apart at the seams. Emotional recognition is vital to understanding movies that want to tell situations we will never end up in (such as being traded for a gory monster that slowly takes your shape) so recognizing the suffering and torment that the characters are experiencing are important for the audience as this is what makes us know what they are feeling, experiencing and going through. The most of us have at least one really bad break up in our luggage and this is what Zulawski uses… at least to lure us into the strange freaky place he takes us.

But the movie also, as Andrej Zulawski points out on the commentary track, works as a metaphor for the “monsters” people became during the cold war and the terror of the Stasi. It’s possible to see this metaphor in the shape of Helen who “accidentally” is drawn into the world/relationship of Mark and Anna, and is the real and only true innocent victim of the piece. As mentioned earlier, neither Mark nor Anna are all that likeable as characters, Helen is the only one who we can empathize with, hence her in all her kindness and innocence becomes the victim. Just like friends and family turning on each other in Cold War Eastern Germany. 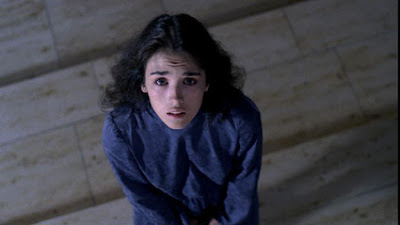 Loaded with a full batch of possessive extras such as TWO audio commentary tracks (one with Zulawski the other with co-writer Frederic Tuten); Interview with Zulawski, A DIVIDED CITY which sees Zulawski’s frequent composer Andrzej Korzynski talk about the soundtrack to Possessed, and if you like his work, you should pick up some of their collaborations released by Finders Keepers Records on LP and CD. REPOSSESSED; an expose on how the film was received in the UK during the Video Nasties era and how the US censors recut the film, OUR FRIEND IN THE WEST sees producer Christian Ferry is interviewed, and even the artist responsible for the amazing poster for the film is discussed in the featurette BASHA. THE OTHER SIDE OF THE WALL is a feature length making of Possession documentary that gives even more insight into this fantastic film…

The Second Sight release of Andrej Zulawski’s nightmarish drama, Possession, is without a doubt one of the top five must have Blurays of 2013. Available from 29th July 2013.

Great review of the film itself but after all that there's no PQ and AQ review, shame.