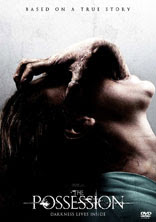 Many many years ago, there was a little movie that scared the pants off its audience, and showcased some of Denmark’s most promising talent. A young Kim Bodina and an even younger Nikolaj Coster-Waldau saw their breakthroughs in Ole Bornedal’s first feature (not counting his two earlier TV movies) Nattevagten (Nightwatch) 1994. The critics loved this dark thriller with obvious horror traits and solid performances, as it won a variety of global awards and became an international success. Bornedal finally made his way to Hollywood and even saw his breakthrough success remade at his own hands as Nightwatch with a star cast of Ewan McGregor, Patricia Arquette, Josh Brolin and Nick Nolte… Big, bucks, big names, big trouble…

Never the less, Ole Bornedal, has constantly released movies every now and again, and they are well worth the time checking out, and several of them are well awarded pieces. So what should to expect when one starts to watch a possession film directed by the guy responsible for one of the finest Scandinavian genre films ever?

Well it goes something like this… starting off with a classic “based on a true story” moniker Bornedal wastes no time at all as he establishes the threat of this piece, a wooden box. Or rather the contents of same wooden box, which contains a sinister power so strong and evil, that it makes the old woman who’s about to smash it with a hammer twist and turn violently as she flips and flops around the floor before smashing her face into the glass table.

Gym teacher and divorced father of two Clyde [Jeffrey Dean Morgon], has his two adolescent daughters for the weekend. It starts off as a great weekend, as he surprise them by taking them to his brand new house, sharing a pizza, complaining over IKEA assembly instructions and visiting a yard sale to pick up stuff for his new pad. It’s at this yard sale that Emily, also known as Em finds a wooden casket with strange carvings on the outside of the box. Yup, you guessed it, it’s the same wooden casket from that demonic opening, and to make sure we really understood the connection, the old woman- now severely bandaged and beaten starts to scream at Em when she sees her with the casket from her sickbed by the window…

So far it’s been established that Clyde is a great dad, doing his best, and he also has a fairly good relationship with his wife Stephanie [Kyra Sedgewick]. It’s fair to assume that there’s a longing for reconciliation between the two, especially in the way they interact with each other at the hospital, and in a strange moment when Clyde helps Stephanie delete a spicy home video from her computer…

All right, we know that these are all good folks, well, perhaps not so much Stephanie as she’s already got her new boyfriend, posh high end dentist Brett [Grant Snow] on frequent visits, which bothers Clyde… She’s clearly moved on, and he’s still hurting… See it’s all trickery to help us empathise with him! So with the real world established, the horror can kick in. A force of antagonism has been established, a family with values has been presented, now time to demolish their ordinary world and turn it into a nightmare ridden one instead.

So let’s get to the scares… Emily opens the box and discovers the contents within, Bornedal continues to explore the family as the possession starts. Dead moths from the box come to life, strange contents awaken our imaginations, and through dialogue we learn how the girls really feel about their parents divorce. Cue classic weird possessed behavior and strange midnight events here, some which are really neat, some just to generic to cause any effect. There’s also a sinister little subplot where Clyde is up for a possible job in a different state, hence “abandoning” his daughters.

Act two starts with metaphoric “Loss of control” as Clyde discovers his eldest daughter now has braces to straighten out her “disfigured” teeth, braces suggested by their mothers new boyfriend, and dentist, Brett. It’s the first time Clyde really reacts to something, and this is merely the beginning of the shift into the unnatural world. Second is the obvious one, his youngest daughter, owner of the strange wooden box Emily, starts acting strange. Where they previously had a beautiful and touching relationship, it changes drastically when the possession starts.

Bornedal takes us to horror convention country. Swarms of moths, small child blurting out potty-mouthed catchphrases, walking weirdly, and growling deeply. The malicious demon may not necessary affect its host, Em, but it certainly does have its vicious ways with those who interfere with Emily and the bond to the demon. Violent death is waiting! What’s interesting is the decision to go with something else than the classic catholic guilt trip and Old Nick lurking in the shadows. The Possession sees Jewish religion being at the core, the box has Hebrew inscriptions and the monster is a Dibbuk, an unruly demon from Jewish folklore. A spot of cool casting sees Matisyahu the Hasidic reggae/rock musician as the bold exorcist that dares take on this evil force no other rabbi will go near.

The Possession may not be super scary, but it is a rather original story, and if nothing else Bornedal gets some fine, solid performances out of his cast. It’s interesting to see a possession movie that takes a different path than the usual one taken when the devil haunts the victims. The movie moves slow and builds some decent characters, even though Grant Snow’s Brett get’s off a bit too easy, and you know from square one that the whole movie will build towards one climactic exorcism, although this one may surprise you as it takes something of a different path there too! At the end of the day, it’s all about family values and how the resurrection of the American nuclear family is a must… oh and last minute twists of fate.

All in all, an entertaining little piece that proves that Bornedal still has it, he can still tell a decent creepy story, an entertaining popcorn horror, but also that studios still care more about cash than presenting genre fans with a terrifying ride. There are two versions of The Possession, make sure you watch the R-Rated version and not the seriously watered down PG-13 version.

Yeah! This was a cool flick! I can also recommend "Fräls oss ifrån ondo" if you haven't seen that one yet.

I haven't heard of that one, but I may have to check it out then! :)