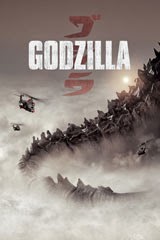 FINALLY, it hit the screens, the most anticipated monster movie this year, or the last three years if you have been waiting as long as I have. So there we where my blogging buddies Fred from Ex-Ninja and Jocke from Rubbermonsterfetischism (who also reviewed GODZILLA today), fidgeting, worrying, fretting, trying not to focus on the negatives we’d heard before hand, but remind each other of the positives we’d heard too. If you’re a listener to the Podcast that Fred and I run, The Human Centipod, then you know all our backstory with Godzilla, and just what our hopes where for this one and what we where expecting. 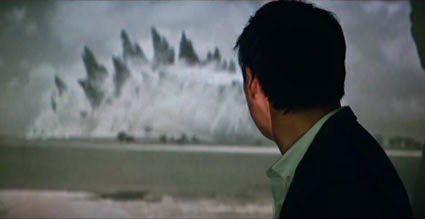 Well it wasn’t quite what I was expecting. I wanted monster movie mayhem non-stop, instead I got semi interesting drama with monster movie mayhem in it. But, that’s all right, because even though I feel that there was to little Godzilla in the movie, the monster mayhem was absolutely foot stomping, building crushing fantastic and gorgeous in every possible way. It took its time getting there, but boy does it pay off. It’s a genuine goose bump moment when she finally shows herself and a damn mighty scene that will stay with you for a long time. I shit you not, if I'd have had my kids with me at the screening, I would have fucking teared up at sharing the moment with them. At the same time, this is probably on of the most serious Godzilla movies made, on par with stuff like Godzilla Vs Destroyah, because it’s a big bad, dark toned movie without place for goofy standoffs, corky dialogue, and as Joachim would say, "The cheapest, poorest western actors possibly available, to play the Americans". 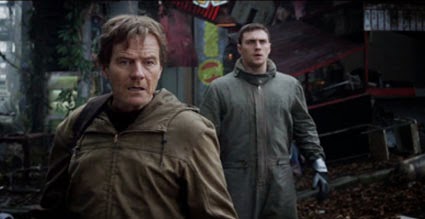 But despite a cast of really good actors, Bryan Cranston, five minutes of Juliette Binoche, Aaron Taylor-Johnson Elizabeth Olsen, the characters where still really paper thin. No real character development, no real character arcs, no attention grabbing multifaceted dimension… but wait… This is a GODZILLA movie, there has never really been any dimension, development, or arcs for that matter, in any Godzilla movies. But still, in the world of Godzilla, character dimension is huge, because it’s all found in the title character, GODZILLA! So where I could waste precious time yapping about the lack of all this I’d rather focus on the real character of the piece, Gojira!

Straight  up, She’s a beauty in Gareth Edwards GODZILLA. Big, strong, forceful, and as both Jocke and Fred pointed out, her face looks like that of a bear. I don’t think this is by chance, as the plot somewhat focuses on Godzilla being a mystic force of nature, risen from the depths of the ocean, as to quote Ken Watanabe’s Dr. Ichiro Serizawa character “Set the balance right!” A strange force attacks nature and mankind, that’s the MUTOs, and Mother Nature sorts things out… or should we say Mother Bear. Because just like a Mother Bear protecting her offspring, that is the exact thing Godzilla does here! She steps out from her hiding and beats the crap out of our antagonists in her genetic programmed “defend the kids” instincts. She’s also where all emotions lay, as Godzilla is the one I root for, Godzilla is the one I feel for, Godzilla is the one I cheer as that last scene closes the movie. Yeah, this one has some really iconic moments to be honest, and it’s a movie that will slot in amongst the top 29 Godzilla movies. 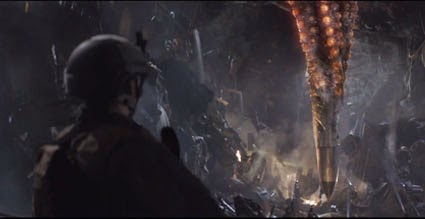 I’d heard it was a slow build and a somewhat tedious first act, but it never really felt neither slow nor tedious. Obviously it was thanks to the plot, not to be confused with characters, because the plot does keep stuff moving forth, and it adds and evolves the Godzilla universe, and it works. Again not the most spectacular plot, but as said, this is a Godzilla movie, no need to complicate it, and we’re only here for one thing, and one thing alone. The plot uses our history to shed light on events; it uses our history to explain the story of Godzilla. And one cannot help but think that certain scenes are taping into our horror of current events like the Fukashima disaster, the tsunamis and earthquakes of the last couple of years, and to some extent 9/11. Perhaps a rhetorical fantasy for something to come save us as we destroy our world

No matter how serious they try to cloak Godzilla, there’s always going to be a Kaiju playfulness to it, and that shines through here too. Even though it is dark and somewhat “bleakish” at times, there are fun moments where Edwards staying true to the “less is more” form that he used on Monsters shows huge destruction scenes, but has them shown as parts of news broadcasts. Framing and visually they come off as the signature wide-angle distant shots that make rubber suit monster model chaos Kaiju. The MUTO monster is grand, and looks nothing like those plastic toys that surfaced online a few months back. These are slick organic ruthless Kaiju beasts that solidly earn their place in the Godzilla universe. 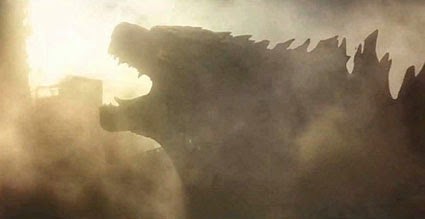 Gareth Edwards has done us good. He’s presented us with a cool Godzilla flick that actually does fit nicely into the universe as created by TOHO. Screw Emmerich and, that which shall not be named, because that’s not a Godzilla movie. It’s a farce, a mockery to all that we Kaiju fans love, a parody on what they though was a Godzilla movie, it’s the Crocs of Kaiju! There, got it out of my system. Edwards has made a movie that delivers on all fronts, it is everything that a Godzilla movie should be. This one is going to be a new starting point, and I can’t wait for the sequel (in my mind it will happen) and just like Fred says, that sequel will be filled with more monsters, more Godzilla, more mayhem! Until then we have Edwards to thank for bringing that darkness back and also bringing a new life to a monster that never dies! Godzilla is KING OF THE MONSTERS and we love her!

Go see GODZILLA at the cinemas now, because this movie needs to be a hit and spawn a multitude of sequels so that we can keep shooting up our Kaiju fixes for a long time to come.

(And please, please, please, despite my complaining that the movie was a tad to long, and took a bit to long to show the monsters, please release a longer bluray so that we get to see the deleted Akira Takarada scenes.)

Great review. Everyone I talk to who's seen it says that they wished the characters were "fleshed out". The biggest complaint seems to be lack of character development. But honestly, I'm going to see a Godzilla movie. I wanna see things get F*cked up! I could really care less about whether or not an actor or actress will win an Oscar for their performance LOL

Great writeup on Godzilla! I do agree with you that the human characters were paper thin. Despite Cranston giving a great performance I thought he was played as an extended cameo. I feel like the humans were there to connect new audiences (unfamiliar with Godzilla) with the story. But in the end I felt like they really captured Godzilla as the antihero to root for. Excellent finishing move on his part, too. I was worried about this one, but I thought the movie was good enough to get me to see a sequel to this tentpole.