In 2009 I spent three intense days in the company of H.R. Giger. It was a surreal, scary and fascinating time, and I received an amazing insight into his art. I'm profoundly saddened to hear of his passing and recall that he told me with sorrow that he didn't dream of flying through the worlds where he found his inspiration in the same way that he used to. 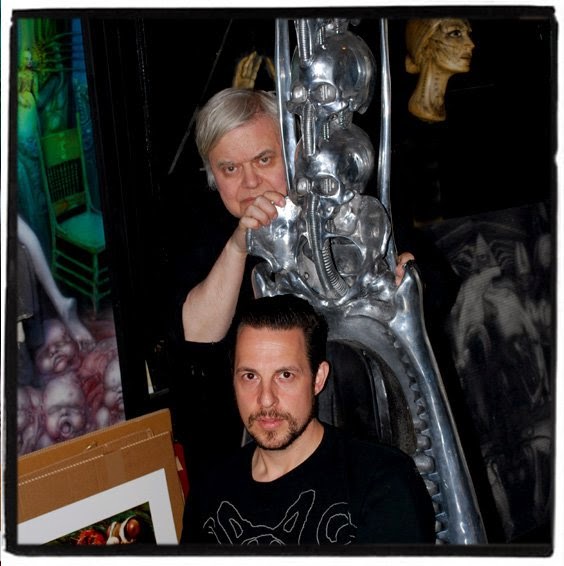 I can't really put into words what I feel right now. I had to take some time and process this news as it reached me earlier today. It's still kind of hard to take in.

Giger, a man who's biomechanoid art had scared me senseless as a child, spellbound me as young man, captivated and moved me as an adult, who had a reputation of not liking journalists, reluctant to do interviews and didn't green light my visit until the very last moment. Really, as in talking to his agent just a couple of hours before I was supposed to fly out. Terrified I waited outside the museum in Frankfurt where the exhibit of his work was to be shown, as I tried to calm down and be as professional as I could ahead of meeting him. Going over all worst case scenarios, how to react if he was as the reputation claimed. My phone rang, his assistant told me, "Giger is here, He wants to walk you through the exhibit, NOW!". Forcing my panic attack to crawl back into it's void, I grabbed my stuff and set off to what I expected to be a fear full meeting. Instead, I was greeted with open arms. H.R. Giger was the complete opposite of everything he was supposedly said to be. Instead I found a charming, shy, confident man, mourning the slow loss of the outlandish worlds he once used to dream of. A gentle, kind man, who put up with me and my array of questions for those days, and took me on a trip through these outlandish worlds guided by his own story. We shared stories of art, film, H.P. Lovecraft, ill health, our passion for cats and skulls, and I at one point, I helped him clean his fountain that stood in the back yard of his Zürich house from leaves that had clogged it up. It was a meeting that was unlike any before or since, and I will hold it as a high point of my life forever.

For me it was more a meeting with an artist, more than the creator of Alien. Alien is merely a blimp on a fascinating timeline, a detail in the worlds Giger used to soar through during his nocturnal flights.

I sincerely hope that he now flies in those worlds that he so longed for once again.

My thoughts obviously go out to his wife and close friends in this sad time.