Just read that Swedish director Jan Halldoff passed away after a short time of illness. 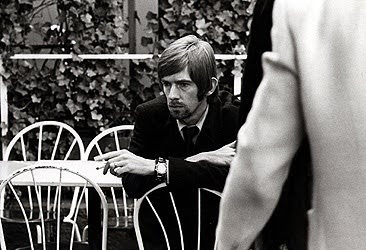 For all of you that don't know who he is let me just tell you that he's one of the best damned scriptwriters and directors that this oblong cold country has ever had. Halldoff started out as a still photographer on movies, before directing a few shorts and then shooting his debut feature Myten - Eller Han snodde en blomma och fick springa för livet. (The D.T.'s) 1966 about a Harry [Per Myberg] who walks on the so called outskirts of life. The movie portays life on the rough side, as Harry roams streets, encountering charming South Stockholm characters and nihilistic coppers. Myten was quite well received by the Swedish press and comparisons where made to the early movies of Bo Widerberg too. Widerberg who directed the phenomenal Elvira Madigan 1967, Kvarteret Korpen 1963 and Mannen på Taket (the Man on the Roof) 1976. Halldoffs last movie was the 1982 road movie Klippet (approx The Fair Deal) about a truckdriver Svenne [Pierre Lindstedt] who finds the possibility of making an amount of cash so that he can retire - a classic "last run" setup if you like - which is what the title refers to. Obviosuly and as the "lat run" movie usually goes the twists of fate and ironies of life become the main obstacle and the movie brings Svenne to a bitter sweet climax

Just like Myten, Klippet and the most of Jan Halldoff's movies, they all explore what at first may seem like characters on the fringe of the norm, and then as the audience reaches insight realizes that they actually rather are more the norm than anything else. From the frustrating realism of Myten, through the haunting Stenansiktet (The Stone Face) 1973, the splendid Rötmånad (Dog Days) 1970 - in which a young Christina Lindberg made her onscreen debut, the debauchery of Firmafesten (The Office Party) 1972, up to his final movie Klippet they all share the same kind of themes and characters. Very typical Swedish characters that easily can be identified with, which is why his movies where enjoyed by the audiences.

Halldoff's passing saddens me as I know people are working hard to have his movies re-released - Yeah Steff-o, captain of my moviequiz team, I know just how much you do for the cultural heritage of this country and perhaps the sweet irony of today is that now with his passing that may be easier. It would be a splendid tribute, because Halldoff's means that yet another of the last true greats of Swedish cinema leaves this world. It's unfortunately becoming more and more evident that we are loosing all our great Swedish directors to time, and there still hasn't been any real revival of these fantastic directors what so ever. There's so much more hidden in the angst ridden darkness of Sweden that isn't all Ingmar Bergman, and it's about time that these guys get the recognition abroad that they deserve. It's a shame because they really shouldbe rediscovered and restudied. At least they where a fresh breeze when they where active and nothing like the rather stagnant Swedish movies of today.
Rest in peace Jan Halldoff, Rest in peace.
- July 23, 2010