That ain't no ordinary lizard... 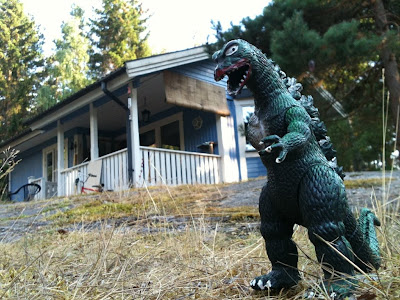 Just bought this vintage Godzilla at the local flea market that we go to once a week whilst we hang out in the woods. It's made in China by Imperial - but with a TOHO license stamp under the foot and produced in the mid eighties. Sure it's a bit tacky, but it will look swell on the shelf with the others that make up the ever expanding Gojira collection at home.

And the reason for that, is that this model is exactly the one that most kids in my generation started out with. The first of many Godzilla toys. I never had one myself but hell did I want one even though I was in my mid teens when the Imperial models started turning up. Bizarrely enough, Imperial is still in business, but these days instead of soft vinyl Kanji figures, they are all about Tomas the Tank Engine, Dora the Exploiter and SpongeBob Square Pants. The times have changed my friends, the times have changed.

So there we where at the flea market and furthest away, the furthest possible actually, she almost summoned me to the table where she stood out like an infected thumb on the table amongst some five-ten other toy lizards and crappy broken dinosaurs. I told my wife to grab the Gojira on the table and as she handed it to me we noticed that it was missing an arm. "Oh we have loads of other lizards and stuff if you want to buy one that's not broken..." said the creepy lady selling the items on display "No we want this one - it's special!" we said almost synchronous... "Oh I thought it was just an ordinary lizard!" No mam, this is Godzilla, THE King of Terror. It's definitely no ordinary lizard and I'll have it now thank you!

It cost ten crowns, that's something like a buck.

Email ThisBlogThis!Share to TwitterShare to FacebookShare to Pinterest
Labels: Geek

Shame about the arm but he's a good one.