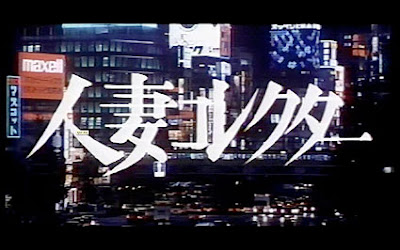 Wife Collector
Original Title Hitozuma Korekutâ
Directed by: Hisayasu Satō
Japan, 1985
Pinku, 62min
Available from: Japan Eiga
Three character’s stories are all woven together in a complex web of depravation and sexual obsession as their lives randomly cross paths and give an insight into a back-story that drives it all forth. Wife Collector, a somewhat misleading title, but a common issue with Hisayasu Satō‘s movies as they rarely keep the original titles Satō gave them when the resurfaced on video after the theatrical rights went out. Wife Collector was originally called Rotting Town, and with a title like that the movie takes on more of a satirical, social comment on Japan. Never the less, Satō is one of the ”Four Heavenly Kings of Pink”, and if any possible social commentary is lost on us westerns we can at least enjoy one heck of a fascinating piece of Shishi/Toei Central pinku eiga. 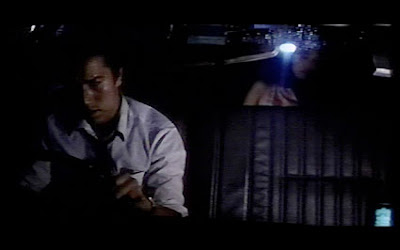 A lonely cabdriver [Isao Nonaka] – who certainly delivers a perverted Travis Bickle vibe - unleashes his frustration upon the innocent victims who ride his cab. A frustrated woman, Misaki [Naomi Hagio, who followed this with Kazu “Gaira” Komizu’s Shojo no harawata (Entrails of a Virgin) 1986] yearns to relive the agony and anguish of a past assault. Akkio [Minako Ogawa], a preadolescent girl, and sister of Misaki, longs to engage in the same depraved sexual acts as Misaki, who unbeknownst has become an object of voyeurism for the Akkio who documents all of Misaki’s carnal activities. These three characters are all connected by a previous chance encounter. 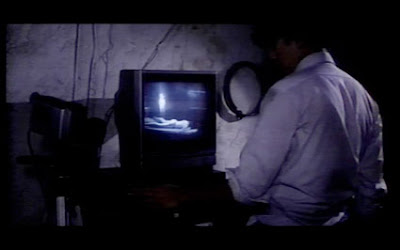 The opening scenes of Wife Collector set a definitive tone for the rest of the movie. A bothered customer asks cabbie Isao to turn down the volume of the punk soundtrack he’s listening too (Ginza Sound - Takashgi Akutagawa). With a frown he turns it down for a few seconds before cranking it on again even higher! She screams – shrieking audio that is used to bridge over the cut from inside the cab to her running down the street as Isao chases her. He captures her and cut to a video camera monitor shot of her sprawled on his bed, obviously drugged. He tears off her clothes and sexually molests her, as she awakens, starts kicking and screaming only to pass out again. After watching the tape recording of his latest session and returns to his car, drives a new customer, and stops by a dumpster where he ditches the young woman’s body. 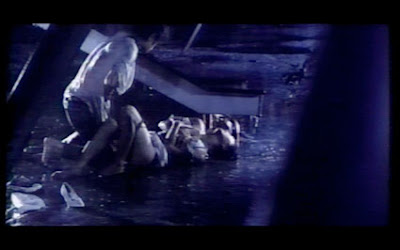 A woman, Misaki walking home in the rain is attacked and raped by a gang of thugs. Hidden away just off the road branch, someone sneaks around taking photographs of the assault. A familiar taxicab approaches, Isao stops his car, flings open a door and offers her a lift… but Misaki turns him down and wanders off into the darkness of the rain. 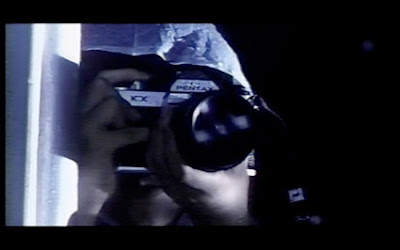 Victims and perpetrators are presented in very polarised manner, but don’t come to any conclusions because screenplay writer Shûji Kataoka [also a director that fan’s of this genre will want to check out] and Hisayasu Satō are about to start messing with your mind, and give the characters some warped shape of dimension that make this a splendid little flick.
Satō frequently get’s tagged with the label “guerrilla style filmmaker” also referred to as the “Sledgehammer technique”. This is all about shooting without permits and using existing setting as locations, which also mean innocent passer-by’s reacting to the action being filmed. There are several such moments in Wife Collector and the culmination of the movie, as Iaso attacks Misaki, in the midst of stressed out commuters trying to get to and from work has many bypasses staring in shock at the action taking place in front of them. 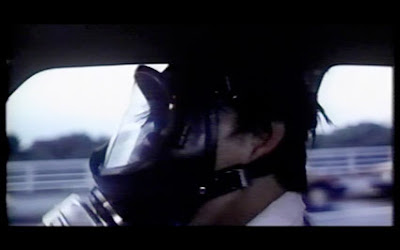 Possibly the kink is taken to it’s height when the sledgehammer style mise en scène shows us a kidnapping and rape scene involving intoxicating gas, a gasmask, a naked amateur tennis player and the back seat of Isao’s cab. In the scene Iaso’s McGyverish homemade gas chamber is used to it’s full potential and it’s hard not to laugh at the terrifying perversity taking place on screen. But it’s also a scene that is amongst my most favourite pinku moments, weird, kinky and fascinating. 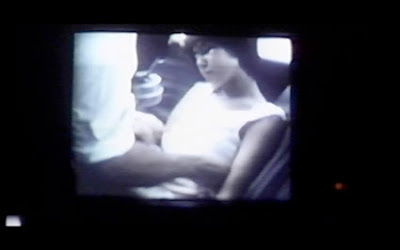 Three themes make up the framework of the cinema of Hisayasu Satō’s cinema - voyeurism, sexual fetishes and warped relationships.
Isao has a video camera in his lair; he later mounts one in his cab. He tapes his rapes, and he also takes pleasure in watching them over and over again. Voyeurism a strong theme in Satō's work, and it is recurrent in the majority of his works. If it’s not a character watching something on screen, it’s the screen images of the blurry, distorted video footage. Hence turning us into the voyeur. Even in his futuristic J-Video pinku/splatter flick Nekkeddo burâddo: Megyakyu (Naked Blood) 1996, voyeurism is present in the P.O.V. of cyberspace. 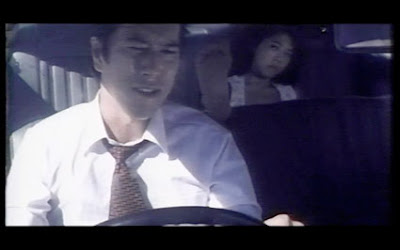 A dominant theme, which Satō uses a lot, is fetishes. In Wife Collector they work on many different levels for several characters. Isao has his rape/voyeurism fetish which drive him to his acts, Misaki has her rape/degradation fetish seen so clearly in the way she seeks perilous sexual encounters with strangers in her quest for emotions equal of those Isao provoked with his previous assault. Akkio has her fetishes too – Misaki and a rape obsession! Akkio is stalking her sister and photographing her sexual exploits. The lust that these images stir in her hence the lovemaking session with her doll – indicate that she too wants’ to be assaulted like her sister and be accepted as a woman. She’s prepared to move on from being a child hence the hanging of her doll, and her provocation against Isao. 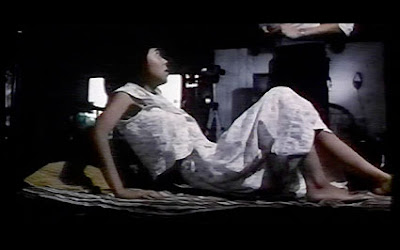 Finally there’s the one of the main themes of Satō’s work - the distorted love affair. You will find this in most of his films in one way or another, as there’s always a hate/love, forced/willing, pleasure/pain in his movies, but still at the bottom of it all a profound desire for love.
Yes, Iaso is a depraved rapist, but he still becomes fascinated by Hagio even going as far as saving her from men she’s chosen to engage sexually with and judging her for her actions. He still wants’ to be with her and perhaps it’s the scar of Misaki’s bite on his shoulder that has served as a permanent reminder of that encounter. Misaki is searching for her rapist (Isao) with the intent of closure, but at the same time she longs to be reunited with her rapist as she longs for the emotions associated with that meeting. Akkio looked upon as a child by both Misaki and their brother, but longs to be treated as an adult. She longs for someone to take her virginity and allow her to move from being a child to being a woman. Isao was good enough for her older sister Misaki, so Isao will be good enough for her. She wants to become like Misaki and follows in her footsteps, and once the act is complete, Akkio holds the upper hand in her relationship to Misaki 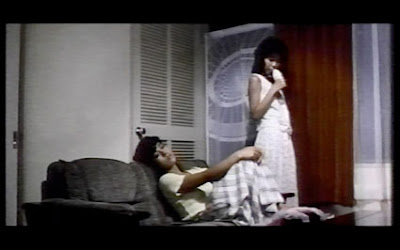 Similar to Pasolini’s Teorema 1968 or even Takashi Miike’s Bijitâ Q (Visitor Q) 2001, there’s a strange reunification, or strengthening of the family if you like, at the end of the flick as the two sisters become closer than they have been in many years.
The use of audio is interesting in Wife Collector. Or rather the lack of a score and the harsh use of diegetic sound. Instead of enhancing certain key moments with non-diegetic soundtrack – such as Misaki's post rape shower scene, or Isao’s gasmask cab rape (or most of the sexually laden moments for that part) Satō skips music and uses the real sound instead. The shower sound is all we hear, the pulse of the traffic outside the taxicab, hence keeping us in the real world. Hisayasu Satō judges not, by not manipulating us to feel any emotion more that that which we choose ourselves as an audience (or voyeur if you will) he leaves judgment up to us.
Cinematographer Kôichi Saitô whose work on this movie is not to be underestimated, worked with Hisayasu Satō again on several more movies following Wife Collector. Amongst them Kurutta Butokai (Kitami/Muscle) 1989 and more recently Shinsei (Shinsei: The Tattooer) 2006 - currently available on JapanFlix.com 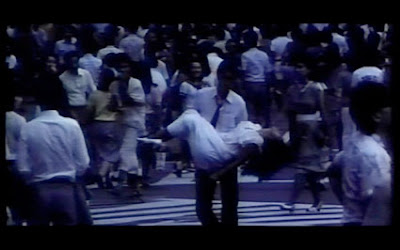 Wow, it seems like it'll be cool & very intense. I love the title and you did a great job with the review, I'll check it out.

Yup, It's a bold and fascinating piece of trash that one is.