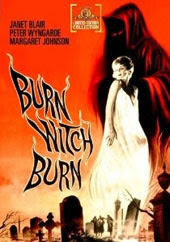 There’s something about old English movies with occult themes that make me think of my late grandmother. She was a true, believing Catholic who went to church on any given occasion and she used to read Dennis Wheatly pulp novels. I find it to be no coincidence that she read Wheatley novels as he frequently dabbled with occult and satanic themed stories. Needless to say, these were stories where good won over evil – which is most likely one reason why she read them. I’m quite sure that she rarely watched movies that used the same good fighting evil with occult themes, but I’m sure she would have got the same thrill from them if she had seen one.

Which brings me to Burn Witch, Burn, a good old fashioned English horror movie that almost naïvely tells it’s story of good vs. evil, deception amongst friends, and how mankind once again is forced to open their eyes to a wider picture.

Burn Witch, Burn starts with a warning of an black magic read over a black screen… a warning of tampering with evil… and then a delightful chanting as the narrator dispels the evil powers that may spill forth from the movie about to start. This goes on for almost three minutes before the movie actually starts going. It’s an effective opening, and definitely something you never would see in today’s genre cinema. Today it’s all about wham bam thank you monster man, and, get the adrenaline pumping.

Scottish director, Sidney Hayers, also directed the somewhat classic Circus of Horrors 1960, and had a lengthy career as director of TV serials such as The Avengers, The Professionals, Enid Blyton’s The Famous Five and later Knightrider where Paul Frees supplied the voice of supercar Kitt… this is of course only interesting as Paul Frees also read the narrative introduction to Hayers Burn Witch, Burn decades earlier.

The Quick fix for this movie is that it tells the tale of Peter Wyngarde [Norman Taylor], a university professor who one night after the customary game of bridge with his colleague Lindsay Carr [Colin Gordon] and wife Flora [Margret Johnston] has the shocking revelation – after a lengthy snooping around his wife’s unmentionables drawers – that his wife Tansy [Janet Blair] is Witch, seriously into Black Magic.Being the man of logic and science that he is, he has her throw all her artefacts on the fire, even the small photograph that she has of him in her locket…Yeah, you guessed it, the next day accidents start to happen around him, a female student who previously loved him, accuses him of violating her, his life is threatened, Tansy falls into some odd trancelike state – and back again.Slowly but surely dark forces close in on Norman, and pretty soon he finds himself face to face with the sinister forces he initially proclaimed don’t exist. And he’s had more of a change in character than you’ll find in a lot of today’s genre movies.

Burn Witch, Burn is more of a drama with occult themes, than a straight forward horror flick, which in all honesty is how genre films where in the sixties, early Hammer Horror, and Psycho, 1960, shifted the way these movies where made, Amicus where just getting started and it took a few years for the penny to drop all the way and horror return to the screen as the man theme in the narratives.But the framework is there, an opening in the ordinary world. Establishing shit, and what life there is like. Bridge nights, colleagues, the family unit and their relations to each other and their friends… The shift in balance as Norman’s world starts to change, and he has to move from unbeliever to believer.

Norman the Sceptic! One of the most effective tricks in horror film. Have someone be completely the opposite of what the story will be and gently shake this person into believing. “ I Do Not Believe!” are the first words spoken in the movie and very much the anti thesis of where Norman will be when the movie ends. It makes the unnatural horror of the movie more acceptable for the audience as we naturally identify with the non-believing character. We too know there’s no such thing as black magic and can easily identify with Norman… or do we? This is how you gently move an audience into the world of horror unleashed, because if he has to believe, so do we. And despite the somewhat shoddy Deus Ex Machina ending, the movie does serve justice and end with the question Do YOU believe? most likely propelling uncomfortable questions into the heads of patrons to ponder as they left the cinemas back in 1962.

Being based on a short story by Fritz Lieber Jr. – Conjure Wife, which had been adapted previously as the Lon Chaney Jr. vehicle Weird Woman 1944, an episode of Moment of Fear 1960, this one, the comedic approach as Witches’ Brew 1980 and it’s rumoured that an adaptation is in development now with a 2012 release planned – although Burn Witch, Burn is the one to stand out as it has a screenplay co-written by the legendary Richard Matheson.

Burn Witch, Burn is an enjoyable movie, overall good performances, and a satisfying plot. I have had the movie poster in my possession for a very long time – a poster which obviously is far more tantalizing and suggestive than the movie - but I bought it in a spontaneous moment thinking that it was a movie version of A. Merrill’s fantastic pulp fiction horror Burn Witch, Burn. Obviously it isn’t an adaptation of that story, but still a decent, entertaining piece that just goes to show that special effects – even though this one does have an eagle attack effect where wires are painfully visible – are not everything and just how far a little really can go.

Here's a few minutes of Janet Blair in action for your entertainment...