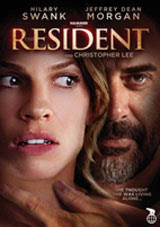 The Resident
Directed by: Anti Jokinen
USA/UK, 2011
Horror/Thriller/Hammer, 87 min
Distributed by: Nordisk Film
I, like many others, did a little happy jig as I learned the infamous Hammer Studios was rising up from the dead. Then the concern that they wouldn’t manage to keep that atmosphere, vibe and style that was Hammer started to set in and it suddenly felt like it may have been a real crap idea after all.
Rumours flourished, movies where announced, facts stated and only time would tell if Hammer would rise from the flames or simply poop out a few turds and sink like a brick to the bottom of the sea of shame.
After seeing a couple of their still quite small output, I’m going to go on record and claim that this is a Hammer which in some ways equals what they had going for them forty years ago, when they took the world with storm and became the stuff of legends.
The first movie to be released by the resurrected company was Finnish born Anti Jokinen's The Resident, starring Hillary Swank and Jeffery Dean Morgan. Then there’s the big hook, which should appeal to all fans of Hammer Horror, the grandmaster of the all, Screen Icon Sir Christopher Lee also holds a part in the movie. It’s an ingenious move of Hammer to bring Lee on-board, because there are almost no words to explain the signals this sends to fans. If Lee is there, then it’s for real.
The Resident sees Swank – who I don’t really like at all, which was my main problem with the film – as young nurse Juliette. She works long, late shifts and within the first few minutes we see her save the day as she get’s in there and saves a patient with a heart condition – full with open heart surgery like moment and stapling together the injury. This obviously starts to create the character Juliette, she’s a no bull shit girl and she has no fear of getting her hands dirty to do her job.
She’s also in the midst of searching for her own apartment – which we later learn is s due to moving to N.Y. to live with her boyfriend Jack [Lee Pace], only to have him be unfaithful to her in their bed – which brings her to Max [Jeffery Dean Morgan] and his beautiful large building where there is an apartment available… This is a huge old style apartment which definitely makes an avid genre fan think of movies like Polanski’s Rosemary’s Baby 1968, The Tenant 1976 and even Michael Winner’s The Sentinel 1977. Although this movie goes a completely different way in the later half, it does hold a great gothic vibe with trick doors, peepholes, two-way glass and secret rooms behind the walls of the apartments.
Half an hour in, act two presents a rush of insight that will run shivers down your spine. What we have thought be a chance meeting that will lead to a stalking ex-boy friend – or some satanic cult preparation, with Lee as cult leader which I was hoping for – ends up being a stalker story of a complete different style. And a damned fine one too as this movie does go pretty far – as per usual for Hammer it never get’s too graphic, but it goes far enough to create that awesome buzzing vibe that comes with Hammer flicks. Needless to say, when all is revealed the movie kicks in on all pistons and the thriller turns to survival horror, and a damned tough fight to settle the score and bring balance back to the world breaks loose.
Obviously one could have requested more Christopher Lee, but the simple fact that he’s in it is good enough for me. The flick could have been more horror oriented, but being one of three flicks released by Hammer this year where all three use horror elements in three completely different stories them it’s still a pretty good movie, and has some pretty disturbing scenes packed in there.
One thing I really couldn’t stop smiling about afterwards – and yeah, it’s a real geeky thing, but for me as an old Hammer fan, it’s a very obvious nod to the older movies – and that was that the movie clocks in just over 85 minutes… and if you know your Hammer time, you know that the majority of classic Hammer flicks all clock in just over 85 minutes.
To sum it all up folks, Hammer are back kicking and screaming stronger than ever. To date the three movies released, Let Me In, Wake Wood and The Resident, have all been impressive in their own rights. Yes I was appalled by the idea that anyone remake Let the Right One In, but then I saw the movie, talked to John Ajvide Lindqvist about it and accepted it as the damned fine movie it is. But the atmosphere, vibe and quality of those movies have been top-notch, and the only ingredient that I feel may be missing is the cosiness of the old flicks. There’s something safe with the old Hammer flicks that I love. They are perfect late, late night movies to which one can drift in and out of sleep to as the movie plays on and on and on…
Hollywood better watch it’s back once again, because there’s a new kid in town and this one already has three contemporary classics under it’s belt. Long live Hammer the future is bright as the Phoenix lights up the sky!
Image:
16:9 Anamorphic Widescreen 2.35:1
Audio:
Dolby Digital 5.1, English dialogue, Swedish, Norwegian, Finnish and Danish subtitles are optional
Extras:
TBA
- August 06, 2011

Nice write-up. Thought The Resident was a solid thriller.

Cheers Ty
I liked it more than I thought I would.

I liked it less than I thought I would. It was TO generic for me, and I liked generic movies :) But it was nice to see Lee and they actors were ok.

forest, thanx.
Fred, I know what you mean. Swankster brought a severe mainstream feel to the piece and it could have been edgier at some times.
J.