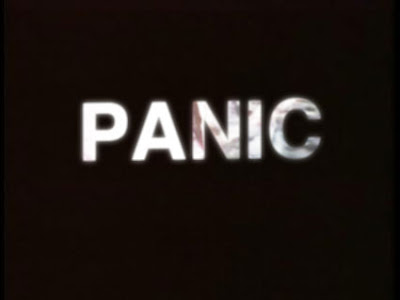 One of my oldest mates here in Stockholm gave me an advanced VCR player some six-seven years back, when he cleared out his warehouse of stuff he’d had in storage since the video racket died out some ten – fifteen years before that. A few weeks ago he found a big cardboard box of old Japanese video tape originals amongst his junk, and invited me to come look at the newly discovered treasure, which I obviously did. I borrowed a bunch of stuff I haven’t seen in ages, or missed the first time around, and again I find myself reflecting other the fact that these old horror flicks, despite how great they look re-mastered, in HD, great clean crisp sound, never really looked better and more enchanting than they did on shoddy video with blurry colours, buzzy sound and grainy images. I’m all for re-mastered re-issues filled to the brim with new interviews and nostalgic retrospect’s, but I can still feel that addiction to VHS like there’ never been S-Video, Laserdisc, VCD, DVD or Blu-ray. It’s an unexplainable kind of magic. 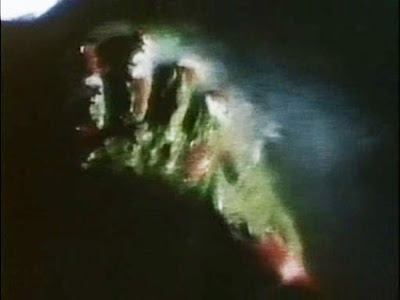 Through a freak accident at a chemical lab, Professor Adams [Roberto Ricci - son of director Tonini] becomes a contagious bloodthirsty monster. Adams colleague and assistant, Jane [Janet Ågren] and Captain Kirk [David Warbeck] are assigned to find out what happened to the professor – as it all starts out as a mystery venture, only the audience know of the monster. But pretty soon the monster is slaying young lovers, roaming the underground sewer system of Newton and spreading panic along his way.
Wasting no time at all, the movie opens with a suggestive shot of some very familiar footage of a place that could be none other than eighties UK. The suggestive footage presents the viewer with an awe of pending threat. Moments later following some shots of Janet Ågren posing with the science props and concluding that there experiment is going wrong, the lab rats are becoming insane and then the genesis of the movies antagonist – Professor Adams - is presented, well at least his boiling, melting blistering face is. The world they live in is established, the monster is presented, the table is set, now let’s rock. 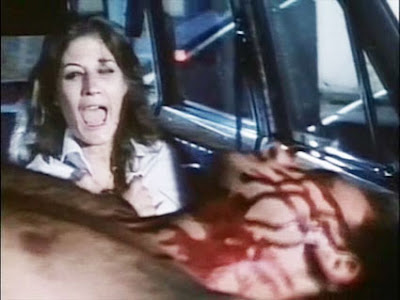 An early attack is used to show the fury and destruction in the monsters wake, when two young lovers get it on inside a small car and get interrupted mid coitus as a disfigured being yanks the bloke out of the car, smashing him into the bonnet before chasing the semi nude chick into a warehouse corner and gutting her. Even the cops are disgusted with the remains when they find her tattered body later on.
If you want to see totally out-dated computer screens, spontaneous nudity punished by violent death, panic in the streets of England – well we never really see it, but they talk about it a lot - and David Warbeck magnificently sneering his way towards yet another pay check, then you will want to check Panic out. 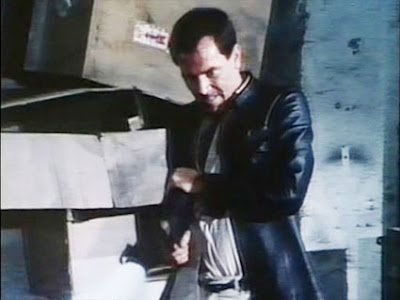 Oh, and I forgot to tell you about a delicate picante minor subplot concerning a perhaps a tad too friendly and sleazy priest [Eugenio Benito] who initially awards the children of the quire with sweets and later is seen walking at night with a flock of them… hiding themselves from the monster they take to locking themselves in the Church… I love the subtle paradox of children hiding from one horror with a one possibly even larger than the monster. Also, you can’t go wrong using children in threatening situations, as it’s one of the most effective tricks in the world. Amusingly I hold a theory that the Spanish genre writers and directors are the filmmakers who predominately use children as a driving force, an emotional tool and a dramatic instrument in their movies. Almost every Spanish flick these past years concerns orphanages, unfortunate children, kiddie ghosts or something that poses threats to children in one way or another – just look at the movies of the Spanish new wave these past years and you’ll see what I’m talking about. So it’s entertaining to see that screenwriters Víctor Andrés Catena and Jaime Comas Gil where aware of that whilst penning this little oddity way back in the day. 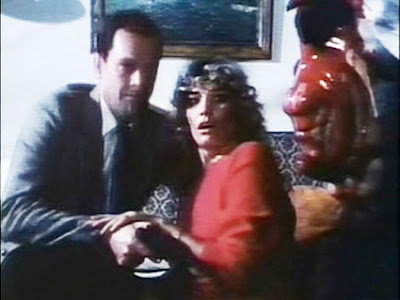 Overall this movie get’s somewhat slayed in reviews, but I can only take this as being critique delivered by people who don’t really appreciate the fine art of European exploitation flicks shot on minuscule budget. Panic does have a pretty decent drive forth throughout, split up between three sub plots. The detective plot of Ågren and Warbeck searching for Adams, the horror plot of the Monster on the prowl and the political subplot of Sir Charles (i.e. Government) setting Plan Q in action – A plan that concerns the total destruction of the village of Newton. Several subplots come together rather early on, as we move into act two where Warbeck questions Sir Charles decision of setting Plan Q in action, is ordered to eliminate the contagion and also told that he’s allowed to use his gun. Warbeck never lets his audience down and once the threat is revealed, this movie get’s going. Exposition is over, now let the fun begin. Yeah so it may not be completely logic why the monster kills, or for what reason, certain questions are never answered and the script is kind of all over the place. But at the same time, I’m here for some cheap thrills, a non-intellectual stimuli and a good time with some cheap European trash cinema. Panic delivers by the bucket full up to the rather bland climax. Oh, the monster, Ågren and Warbeck arcs do culminate, but there’s more to follow that… 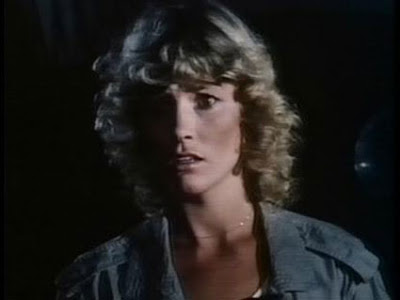 The grisly effects and fleshy monster makeup by Rino Carboni and Cataldo Galliano do what they are supposed to – for the time effective and no lesser that other effects at the time. The movie keeps Dr. Adams off screen for as long as possible as to build to that inevitable last minute reveal. See, it's not all wrong, there's a lot of stuff working in favor of Panic. Cinematographer Giovanni Bergamini – who also shot Lenzi’s Cannibal Ferox 1981 and several movies for Enzo G Castellari, Quel maledetto treno blindato (The Inglorious Bastards) 1978, amongst them, sets and composes shots in a way that never really sands out. Although take note of the way Fulci regular Vincenzo Tomassi edits the first gore sequences, it’s fascinating, but unfortunately never repeated again in the movie. This is unfortunately as this is a splendid way of getting the most out of a tension reliever! Finally one should say something of Marcello Giombini’s score, as it is pretty neat and get’s the job done, at times it’s catchy, works with the action on screen and does add to the eighties feel of the movie. 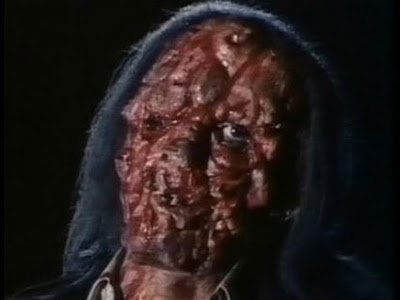 According to rumour – or video folklore if you like – the movie was actually shot in 1976 under the name Bakterion, but was deemed so terrible by the producers – kind of unjust if you ask me as there’s certainly worse shite been released that Panic – that it was shelved until the early eighties when hard core gore movies where in demand. Sounds bogus, but an interesting story as there’s a small chance the movie could have been innovative more than a knock off of a knock off, as the movie ends with a somewhat time typical “pending doom prophecy” text-plate to simmer in the audiences minds as they walk away from the movie, much like the ones seen in Bruno Mattei’s Virus (Hell of the Living Dead) 1980, Andrea Bianchi’s Le notti del terrore (Burial Ground : Nights of Terror) 1981 and Umberto Lenzi’s Incubo sulla città contaminate (Nightmare City) 1981 to name a few.
A fun note is that Production designer on the flick, Javier Fernández would later go on to be a highly acclaimed art director and receive Goya nominations for several of the movies he worked on during the mid-late nineties… such as Almodóvar's Kika 1994. 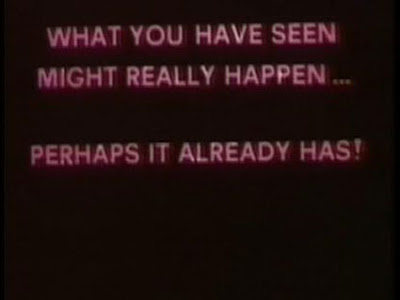 Director, Tonino Ricci – who worked second unit on movies for Mario Bava and both of Lucio Fulci’s White Fang flicks - had a pretty decent run going at the time, under the pseudonym Anthony Richmond, and churned out a fistful of entertaining low budget lookalikes of other successful genre flicks at the time. I can’t really say why this one still is something of a lost movie. It certainly doesn’t move slower than others still being hailed as epic works. The grand formula of Panic is Boy and girl get into some heavy petting, Monster turns up and slays them whilst Warbeck and Åberg look for Professor Adams… who we all know is the monster killing the horny kids and naked chicks. There’s a threat established early on that the small English village is going to be nuked and you don’t really need much more that that to keep a movie alive now do you?