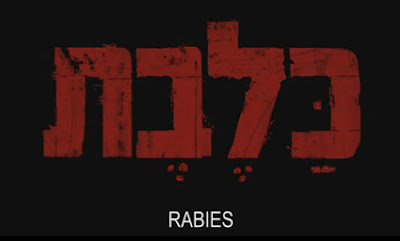 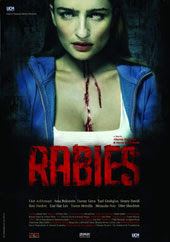 With Keshales & Papushado's Rabies, I was expecting to see “the First Israeli slasher”. I don’t really know why, but that how I’ve understood it to be reviewed/categorised in certain circuits. But they are all wrong. This isn’t a slasher film at all. There’s no single antagonist stalking prey in the woods. There’s no escaping the slashing knives of the maniac. No, Rabies most certainly isn’t a slasher, it’s something much more sophisticated, complex and damned right fascinating.

A brother and sister hiding their secret love affair, four twenty-something friends on their way to a tennis match, two police officers with way to much time on their hands and two forest wardens tending to the Fox Reserve all get caught up in a violent nightmare when something in the small woodland area brings out the worst in them. 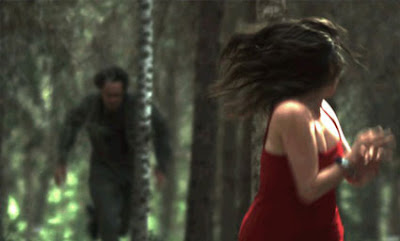 Rabies is an impressive flick and the duo of Keshales and Papushado obviously know what they are doing, and this is possibly where Kashales previous occupation as a movie journalist comes in handy. Knowing what works and doesn’t is a fucking great place to start off at. Because when you know what convention brings in its wake, you know exactly what path’s you want to stay safely away from. There’s more than one unexpected twist to the narrative that completely rockets the movie into new terrain and this brings a fresh vibe with it. 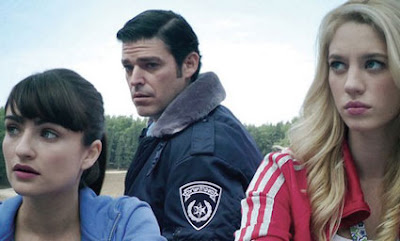 This is a movie where the filmmakers take time to establish the characters, setting up their world and their ever-important traits. Character releations are explored, the relationship between Menashe [Menashe Noy] and Rona [Efrat Boimold] and their growing secret, the raging hormones and repressed desires of preppy lads Mikey [Ran Danker] and Pini [Ofer Schecter] contrasted by the suave chicks Adi [Ania Bukstein, who I definitely want to see more of] and Shir [Yael Grobglas], the lurking fear and frustrations of the two policemen, Danny [Lior Ashkenazi] and Yuval [Danny Geva who gives one hell of a great performance, bringing his sleazebag cop to life]. Familiar characters types, but with depth and several surprises up their sleeves…. and I simply love the way taboo’s are shattered from the very first lines of dialogue, that of Tali [Liat Har Lev] and Ofer [Henry David] as they reveal their secret love affair. This opening sequence also set’s a great tone for the movie as Tali starts the movie deep inside a damp underground trap set by the mysterious man who roams the woodlands. Generic horror would have designated “the man in the overalls” [Yaron Motola] as the main antagonist. It’s familiar stalkers/horror turf, a one-man killing machine tormenting the protagonists. But Rabies merely uses this as a tool to present a threat, an obstacle to start up the drama. It’s an effective one and it also leads the narrative forth to a possible opening for a sequel. This conventional archetype is also used in one of the movies most distressing scenes where identities are mixed up and unfortunate events lead to a shocking violent climax to one of the many subplots. 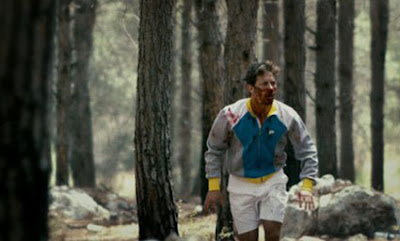 Rabies is almost like a genre version of Robert Altman’s Shortcuts 1993 or even Paul Haggis' Crash 2004, where a series of subplots with active story arcs always end in effective cliffhangers, before switching over to a new group of protagonists/antagonists. Again, the character we initially think to be the antagonist works merely as a stimulus for the events that take place. It’s a splendid twist on convention and an inventive way of using the old to create new.
Rabies sticks it’s neck out and proves that an ensemble piece can actually have multiple protagonists. Where the generic horror film rarely takes time to establish characters, and showcases familiar stereotypes instead, hence declaring a use of the “final female” formula that’s been done to death since Carpenter’s Halloween 1978. Instead we are introduced to an ensemble of complex characters with their own secrets and hidden agendas. Almost all of the characters have backstories that come into play during the course of the movie. It’s these backstories that also drive the series of events that take place. With the help of “the overalled man”, let’s call him the conventional antagonist, the characters themselves become their own antagonists at the same time they are protagonists. 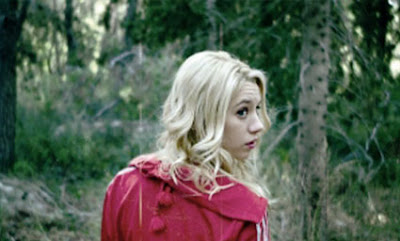 One could look at the movie as a kind of “the evil that men/women do” when faced with extreme situations. In my take the forest possesses some dark force that becomes something of a catalyst for ill deeds. This is where the name rabies makes sense. Something in that woodland twists the judgments of the characters, transforming them into rabid animals instead. Now I’m not talking about frothy mouthed monsters, but more on an intellectual level, as their moral grounds are tested and that mental restraint that keeps us from reacting in normal life is repressed. Here it’s instinct without moral reasoning. 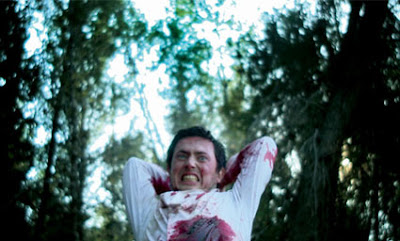 At the same time, in this rather bleak and violent world portrayed, there are some very sensitive and emotional moments. Several of the subplots have tender motifs for the arcs, which obviously help us to empathise with certain characters. There’s also some great character twists where empathetic characters suddenly, due to the circumstances they find themselves in turn to the dark side and commit some atrocious acts. It’s becomes a violent roller-coaster ride where you never really get the chance to catch your breath. You never really know whom you can trust or where their characters will take you, which creates a haunting edge throughout the movie.
Be prepared for the unexpected in this impressive debut film, which will jerk your imagination and take you on a murky ride beyond prediction.

It sounds even better than I expected. Nice to see that it's not another generic slasher!

It's so much more than generic. It's fresh and innovative. I Like it a lot!