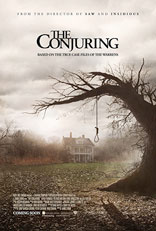 James Wan is the king of mainstream horror! That is FACT! Gone are the days of the independent sleazy exploitations flicks that I grew up with. Films today try too hard, and if they are sleazy they always end up being pornographic, if they are horrific they usually tend to go over the top and settle up for a hand of god bogus fix in the last act, if they are violent, they more than often tend to be brutally nihilistic and dark and end with a funny ironic tune as the credits roll. Nothing is naïve and inventive anymore… it’s all preprogramed and calculated and formulated… at least in the mainstream.

But, James Wan get’s in there and does his thing. Yes, the films may be considered mainstream and feel somewhat predictable, but Wan goes his own way, reinvents his shock tactics and keeps delivering, and I’m surprisingly excited way above expectation when watching his stuff. That’s just the way it is. Rack them up, SAW, Dead Silence, Insidious and now The Conjuring. Blam, Blam, Blam, three damned effective horror shows that have left an impression. (Even if Insidious had a somewhat dud ending, but I’m holding out for the sequel to see if they bring it all round full circle) All of them films that gave you precisely what you wanted. Heart stopping scares; freak out moments and an entertaining story told in a somewhat new fashion. There’s a reason James Wan’s films spawn imitators, cash-ins and multiple sequels. They are highly efficient pieces of horror cinema that will make you choke on your popcorn, and then go back for more.

The Conjuring bases its tale upon the real life characters of Ed and Lorrain Warren (played by Vera Farmiga and Patrick Wilson). Now if you don’t know of them, they where American investigators of the paranormal and their biggest claim to fame were investigating the Amityville Horror case. The Conjuring tells the story of the foregoing case; one where the Perron family are up against a sinister entity that only the Warrens can save them from. As you see, The Conjuring is basically classic haunted house/possession turf. All done with the ever-deceptive, slight of hand, smoke and mirrors trickery of shock meister James Wan. 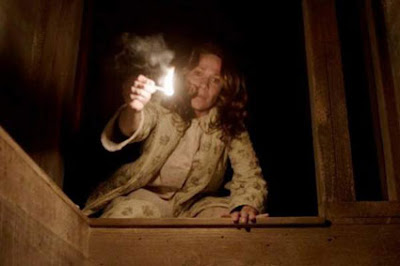 The way the story moves is traditional storytelling 101. First off, establish the threat through a smart initial attack. In its short form, the opening shares the story of haunted Raggedy Annabelle, a dolly inhabiting an evil spirit. Now this is a cunning way to establish the force of antagonism, as it introduces us to the fact that ghosts exist and at the same time the story is told to the Warrens, hence introducing them. The world famous demonologists, paranormal researchers, and exorcists, Ed and Lorain Warren. With all this established, key the titles, run the old “True story” card and get things started.

The wraparounds, as in the opening story of Raggedy Annabelle and the final lines of dialogue referring to the Amityville case, give credibility to the tale of the Perron’s. The two cases are “actual” cases and therefore there’s no reason to doubt the main narrative either. If you are anything like me, you’ll do some research straight away when hearing that “the conjuring is based on true events”. The first two cases you’ll come up with are Amityville and Raggedy Annabelle… a smart way to convince sceptics that the story was a real one.

The Perron family (with Lili Taylor making a great return to genre as mother Carolyn Perron) move into their new house, or rather mansion, and the moment their youngest daughter April finds a musical box hidden away in a tree we are miles ahead of the story - because that’s partially what that opening scene and the information that the “Doll was a vessel for a demon” dialouge was all about!

The hauntings start that same night as family dog Sadie is snuffed by unseen forces. Slowly, slowly the tension builds –rooms are cold, funky smells are experienced, hidden basements are disclosed and a cute childish game of clap and seek is used to give some serious scares. Wan begins to manipulate the audience into vulnerable territory as he sets us up for scare after scare! Reintroducing the Warren’s into the piece, their everyday life and profession as demonologists is intercut with the events in the Perron house. Eventually the Perron family is left with no other alternative than to contact the church about the strange events in their house, which in turn leads to the Warrens and how they come face to face with the case so haunting and disturbing that they have it secret until now… 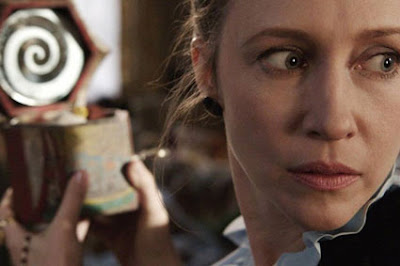 But what really fucks you up with The Conjuring is that Wan sets you up for the shock moments all according to the book of convention, but never guarantees that he’ll deliver on that tension! Yes, it may sound flakey, but it’s terrifyingly effective and I shit you not when I say that a good damned half of the scares and wind-ups in The Conjuring are all your own doing. Wan only moves his camera, dollies in, set's you up and builds an expectation. Now and again he’s got something up his sleeve to scare you stiff, others he’s going to make you get all wound up just because he can! Less is more, and The Conjuring is creepy as hell!

The Conjuring builds an amazing tension, delivers some really great scares and once again confirms that James Wan is a fear-monger to rely on! Opens on Cinema screams everywhere on Friday the 6th!

I really liked it too. Easily my favourite Wan film so far. It felt to me like a genuinely old fashioned horror movie, without trying too hard to be so (like House Of The Devil). Definitely got me looking forward to INSIDIOUS Part II. Speaking of upcoming movies, are you looking forward to GREEN INFERNO as much as I am? ;)

Totally agree... although I really liked HotD too. And yeah, I find that I'm growing really enthusiastic about Green Inferno. For some reason I have a weak spot for Roth, and I feel that he really redeemed himself with Hostel 2. So yeah, Looking forward to that!