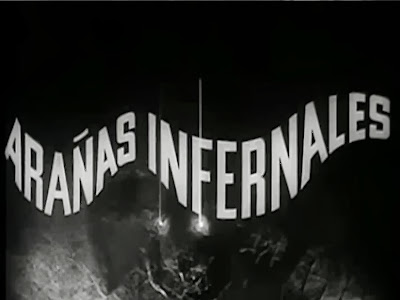 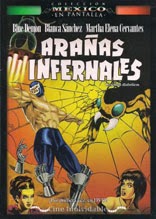 Of all the antagonists the legendary Blue Demon faced, the question is if the giant brain eating alien spiders of Arañas Infernales don't take the price for being the most surreal! The second of his solo movies, the last of the black and white Blue Demon films, and also the final collaboration between producer/writer Luis Enrique Vergara and Blue Demon, Arañas Infernales was for decades considered to be one of the “Lost” Blue Demon films. But in 1999 a print turned up on Mexican television and later it was released domestically on DVD. So there’s no time for sad faces, as Arañas Infernales has returned from the vaults of the lost, and now can be enjoyed as the delightful cocktail of multiple sub-genres in one supersonic death ray that it is! Starting off with a wonderful scene of a spaceship shooting laser beams at stuff off screen and then hovering down over earth, whilst the voice over establishes the threat of the alien invaders from the galaxy of Arachnea, the whole thing is cross cut with our hero, Blue Demon in the mandatory opening wrestling match. As you see this is a movie  that catches fans of pscyhotronica, sci-fi or even Lucha libre from the word go.

Blue walks away from the opening fight victorious of course, and as he and his mate drive home their car strangely breaks down, a buzzing light is seen on the horizon and they find a car on the side of the road with a smoking skeleton slumped over the steering wheel. A hot space alien, Queen Arianec [Martha Elena Cervantes], semi hiding in the shadows, hypnotizes some dopey blokes and tells them about the space spider plan to steal humans and feed off their brains. The goons reveal the sign of the spider at the back of their necks (used to reveal who’s bad and not every time the camera zooms in on their spider marks through out the flick) and stumble off to carry out the fiendish plan… the plot thickens, but first another fight, this time a tag team match, and Blue wins this one too. 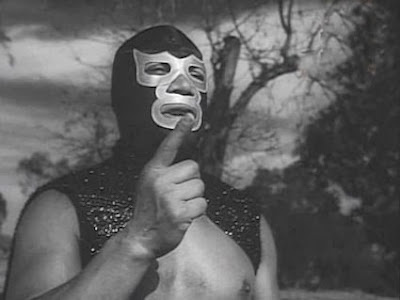 A poor couple are jumped in a dark alley, he knocked out, and she kidnapped and fed to a giant spider that lurks in a giant web out in the woods. Blue Demon and mates take a trip out to the spot where they saw the strange stuff the previous night, only to be attacked buy the alien queen, stunning rays of audio and caped goons… a fight breaks out and Blue does his thing! Queen Arianec sends her goons off to fight Blue who starts to put one and one together, realizing that there’s something off on the go… something to do with that spaceship he saw earlier on. Struggle, struggle, struggle, plot, plot, plot, busted by Blue, busted by Blue, busted by Blue and so on with a few unfortunate victims falling prey to the giant spider (which you may have figured out is Arianec already), and a sturdy chug forth to a final climactic battle between Blue Demon and Prince Arac [Fernando Osés] who’s come to help Arianec drain the world of human brains. 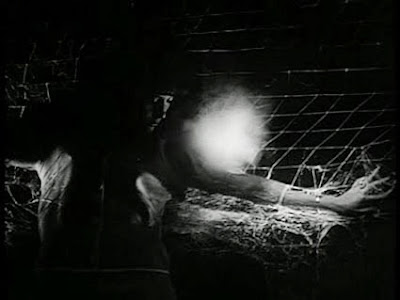 Turning it up to eleven for the final act, the aliens infiltrate Blue’s next big bash in the ring arming his opponent, the sardonic Prince Arac with a deadly weapon! For each blow Blue serves up, Prince Arac slowly transforms into a spider handed fiend! You have to see it to believe it… or just check out the awesome Ricardo Sáinz special effect below, but if nothing else, this is some fantastically trippy stuff and I love every minute of it!  A classic set up if there ever was one follows as Blue’s mates Joseph [Virel Sergio] and Hilda [Blanca Sánchez] are kidnapped during one the climax of Prince Arac and Blue Demon’s fight – and you know what happens when Blue’s mates get kidnapped, it’s shit kickin’ time, even if it means Blue Demon has to fight off giant spiders, wrestle space aliens and 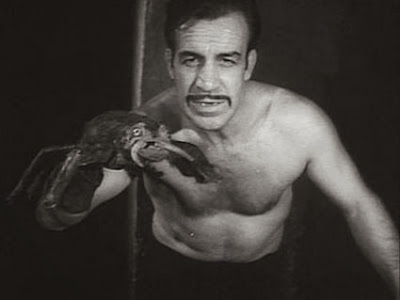 Show stopping highlights in this wonderfully weird flick are a dog being shot by the space aliens and becoming a smouldering heap of bones (yes, think Mars Attacks), a wicked scene where Queen Aracnia space rays a goon to keep him from revealing them (think Dalek death rays), Prince Arc entering the ring and his opponents laughing at him before he beats them silly with just a few power punches and needless to say the fantasticly goofy giant spider!

Supposedly the scenes of flying saucer scenes where lifted from (yes, as in nicked) from Ed D. Wood Jr’s Plan 9 from Outer Space and Tom Graeff’s Teenagers from Out of Space, but who cares, this is super schlocky sci-fi, Lucha libre fun, a must see for fans of Blue Demon and cheap space invasion flicks. With that said, it’s time to right a wrong, as Gustavo Caésar Carrión at times get’s credit for the eerie space age soundtrack, although this is unfortunately not right. The composer on Arañas Infernales was Jorge Perez Herrera, and quite a lot of the warbly sci-fi schlock comes right off the legendary Dick Jacobs and His Orchestra Themes from Horror Movies LP from 1959. 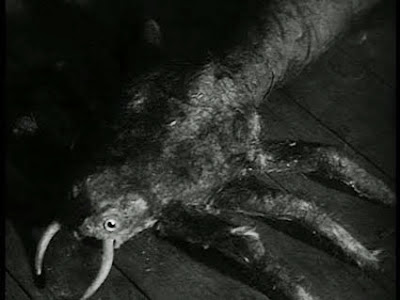 Following this delicious black and white battle against spider aliens from outer space, Blue Demon returned in the colourful and lush Blue Demon vs. las Diabólicas (Blue Demon vs. the Diabolical Women) in 1966.

Thanks for these reviews. This is one genre I've really wanted to begin exploring and have enjoyed your blog. Was just wondering, I notice there are two books out from McFarland on Mexican horror/wrestler films. If your familiar with them, can you recommend one above the other ? Thanks very much.

Thanks!
Both books are really interesting, one of them is more of a reference book with short facts/reviews, the other is more the history of Mexican genre. I'd say get both if you are wanting to explore the genre!

Thanks - I'll pick them both up.

Do that sir! You are worth them!