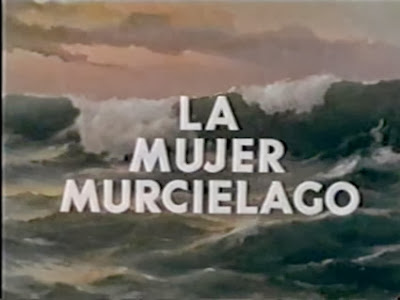 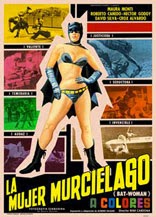 Many where the collaborations between Rene Cardona and producer, screenwriter, actor Alfredo Salazar, and many a great film did their many collaborations birth, movies that make up the cream of the crop of Mexican genre!

A passion for mixing and meshing luchadores and luchadoras against any monster conceivable, Salazar’s story for The Batwoman basically reuses the same plot as he’d used several times before (and would again)  - a mad scientist playing God, which becomes the enticing incident for our protagonists to get involved. Mexican lucha libre flicks had in the last couple of years been inspired by James Bond spy escapades and the success of William Dozier’s Batman TV series. Salazar had already proven that he had quite a talent for penning movies that featured strong female protagonists, Las luchadoras contra el medico asesino (Doctor of Doom) 1963, Las luchadoras contra la momia (Wrestling Woman vs. the Aztec Mummy) 1964, La mujer murciélago and later La horripilante  bestia humana (Night of the Bloody Apes) 1969 – all directed by Cardona Snr. All movies have in common that they lead is a strong female character, wrestling takes place both inside and outside of the ring, and villainous scientists with a fiendish plan to take over the world!  Oh and none of the women take any crap from any man. 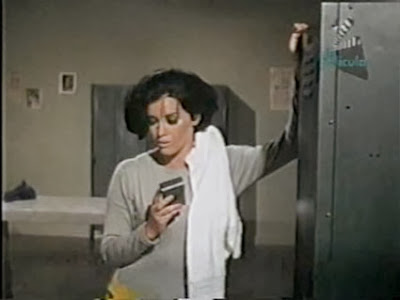 Batwoman’s alter ego is rich society chick Gloria. Gloria’s secret is that she moonlights as a masked luchadora in the ring, but is also a renowned secret agent who hides her identify behind the mask of Batwoman. None other than the gorgeous Maura Monti plays Batwoman. Monti, another one of those fantastic women who made something of a micro career in Mexican movies, similar to that on Elizabeth Campbell, starred in more than thirty films before retiring when her husband asked her to. So even though she had a short and intensive career, the movies she left behind are great pieces of work. 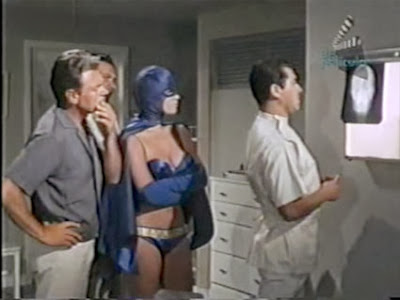 A string of mysterious murders, leaving strong hefty athletes of Acapulco washed up on the shores, have the police left clueless. Detective Tony Roca [Cardona regular Armando Silvestre] has noted a series of similar crimes in Macao and Hong-Kong. Special agent FBI Mario Robles [Héctor Godoy] is also on the case and has brought in a secret weapon: Batwoman! [Monti] Swanky jazz flows over the soundtrack and a lengthy introduction to Batwoman is given showing her in various sport and physical activities such as horseback riding, and free diving, before she’s into the ring for a few shots of her fighting skills. Making a show stopping entrance only suitable of a secret agent, Batwoman parachutes into town in full outfit, cape, mask, and bikini… 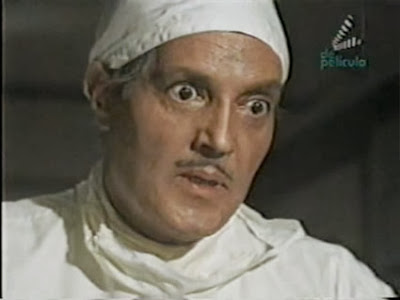 With Batwoman presented, it is time to introduce the antagonists. On a boat called Reptilicus, Mad Surgeon Dr. Williams [Roberto Cañeda – certainly no stranger to playing mad scientists in Mexican genre pieces] complete with loony assistant called Igor, is busy at work trying to create a hideous Fish-Man hybrid! Failing miserably again, he sends out his minions to kidnap yet another athlete – because you kind of know that Dr. Williams is the murdering maniac responsible for all those dead athletes washing up on the shore. Tricking a wrestler known only as “Swedish” [Manuel Cappelito] out on a fishing trip, he’s kidnapped and strapped tightly to Dr. Williams operating table. Triumph at last – although we never see any of the operation, we do get to see the dodgy fish-man swimming along the ocean floor on a monitor as Dr. Williams laughs sardonically and proclaims his experiment a success! 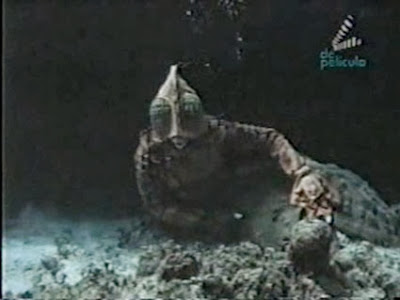 Gloria  - Batwoman to you and me - meets up with Tony Roca and Mario Robles who quite clumsily bring us up to speed – as if you didn’t get what you’d seen in the last ten minutes – and after realizing that they have come to a stand still, as prime suspect Dr. Williams, refuses to let them enter his boat, Batwoman has to don the mask and sneak onto the aquatic laboratory! Sneaking around the place, she just about discovers Dr. Williams’s secret lab and sees what she think might be a Fish-Man hybrid before she’s discovered. Is the end nigh? No my friends this is merely the end of act one, as Batwoman grabs a jug of acid and splashes it across Dr. Williams face and makes her escape as he, bleeding and in pain from his melting face, commands his men to catch her at any cost, she will be his piece de resistance – Fish Woman! 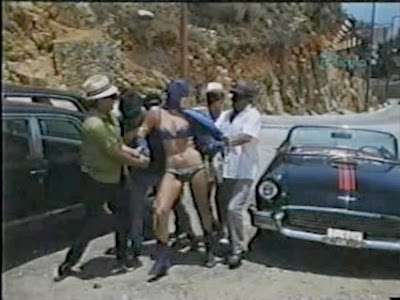 As far as the art of storytelling goes, The Batwoman is something of a delightful mess. It’s terribly straightforward and there’s never really any mystery, as we know from the start whom the villain is, and what his fiendish plan is. But at the end of the day, it’s not really the depth of the story you are here for – albeit extremely psychotronic indeed – you are here for the wild ride, the amazing fish-man experiments, the fiendish villains, the car chases, the quirky surf rock soundtrack and for Maura Monti! 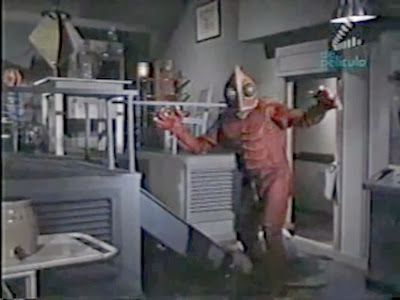 Halfway in, Fish-Man finally makes his appearance, and it’s almost a cheap kaiju feeling to his presence, but by gosh does the action pick up, Fish-man fighting Batwoman underwater is fascinating and certainly rings Creature from the Black Lagoon. He may not have received the credit he was due, but Alfonso Bárcenas Fish-Man is rad, and without any doubt the centrepiece of the movie, along side Monti’s swanky Batwoman that is!

As the climax approaches, Roca, Robles and Batwoman all find themselves captured by Dr. Williams who seems to be getting away with his plan of using Batwoman to create a better Fish-human hybrid, and you’ll never guess who comes to the rescue... 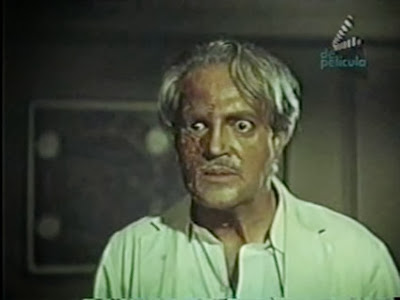 The Batwoman is a butt-kicking funfest filled with some really fantastic moments of Salazar/Cardona madness. Swinging surf music, swirly scene transitions, speedy car chases, underwater action and loads of cheesy fights! Although I’m not sure that it’s Monti in the Batwoman suit during the actual Luchadora sequences, as body shape somewhat changes! Monti totally rocks the as the suave, sexy, tongue in cheek, ass whipping Batwoman, and she most certainly is one of Salazar’s strong female characters, although one odd detail closes the movie. A last minute gag, perhaps included to assure the male audience that they still had the upper hand, a sign that Batwoman has her weakness too… In the vein of classic horror, going for one last shock, Salazar and Cardona go for one last kick as Gloria (Batwoman out of suit) leisurely stands at a bar taking in a drink with the two leading men as they celebrate their victory (as in the male detectives, not Batwoman’s as they still don’t know Gloria is Batwoman) and suddenly Gloria belts out a high pitched scream queen scream at something off screen… you may think it’s Fish-Man coming for one last attack, but you are wrong. It’s a mouse. Contradicting everything that Salazar has built up with the strong female character, Gloria is in that last scene, reduced to nothing but a stereotypical woman, weak, needing the help of strong men, and terrified of mice.  I chose to read it as Gloria staying in character, sticking to the façade of her alternative persona, keeping the men in the dark, that underneath all that hair, makeup and chic designer dresses, she is THE BATWOMAN! 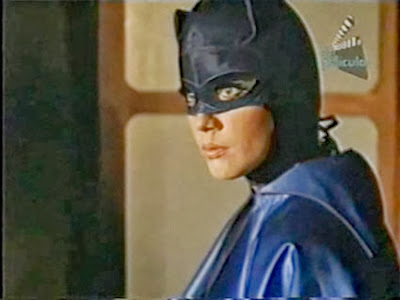 The Batwoman is top-notch Mexican psychotronica! A must for fans of hot chicks kicking ass, rubber-suited monster men and lucha libre! All hail Alfredo Salazar and Rene Cardona and the cinematic legacy they left behind for fans of wild and crazy cinema. Viva!