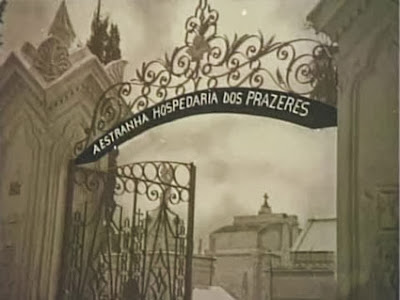 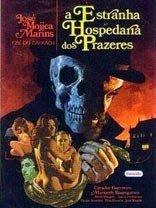 After a way to long, but superbly surrealistic, what-the-fucking-fuck opening, crosscutting seductively dancing women dressed in equivoque nightgowns, rhythmic beat club Congo-drumming and screaming shots of naked witches, apes and old wrinkly cronies – all the cheapest possible joke shop masks – this metaphorical stand off between Good and Evil where Coffin Joe stands, resurrected form the dead, yet again! (All of which can be seen in glorious colour below!) 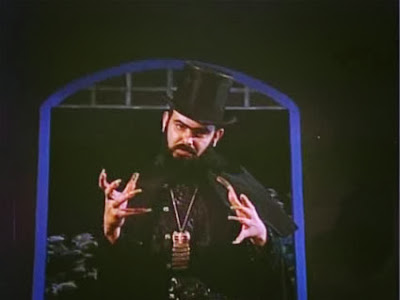 Jose Mojica Marins makes his entrance in his Coffin Joe guise, and he does this for a reason. As customary, he kicks off the movie with some of his trademark philosophical ponderings.

“Live to die or die to live? Is there a correct answer? No! Only doubts! Only deductions. Only the certainty of the emptiness! Loneliness is desperately searching for everything or the nothing in the vastness of the dark. For the answer to this riddle would be the end of the mystery. The end of eternity’s secret, the apogee of happiness, before an accomplished mission because man would be face to face with his biggest conquest, the awakening of the own origin itself.” 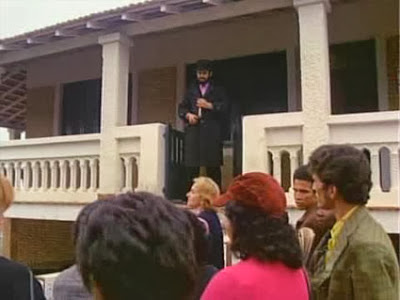 Sounds fair right? OK, so his line of thought is not to easy to follow this time around, but you know what, it’s Marins trait, so just listen, take in what you can and who knows, someday you may make a connection or a link or something in what the said may make sense… until then, let’s just roll with it. So far you may be right to presume that this is a Coffin Joe piece, in some ways that’s right, but at the same time, and if you are familiar with his works you will know, that this is the way that most of José Mojica Marins movies start. With some food for thought, an appetizer, a clue to what the theme of the movie will be. Such as his existential ramblings and desire to find a woman fit to birth him a child, as to secure his bloodline, his being, his existence. His mark in time if you want, and definitive traits of the three films that make up the Coffin Joe trilogy: À Mela-noite Levarei Sua Alma (At Midnight I’ll Take Your Soul) 1964, Esta noite Encarnarei no Teu Cadáver (This Night I’ll Possess Your Corpse) 1967 and the final instalment, Encarnação do Demônio (Embodiment of Evil) 2008. Other than those films he merely acted as a presenter, a host, a figure of authority for Brazilian genre film in the same way as Alfred Hitchcock presents, perhaps at his finest in the excellent O Estranho Mundo de Zé do Zaixão (Strange World of Coffin Joe) 1968. From here on, as the main narrative starts, Coffin Joe is out of the movie. From here on Marins plays a complete different character, the landlord of the strange hostel of naked pleasure. 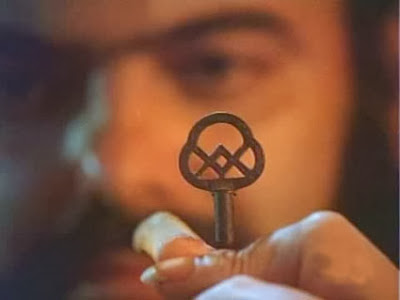 From here on we go to a magnificent space model and a series of even more questions, unanswerable questions, before the story kicks in. It’s Friday the 13th, answering an ad in the paper for position as receptionist at a nearby Hostel several people gather with hopes of finding a job. After being hand picked and hypnotized by the Landlord [Marins] the workers are assigned to attending the “Guests” of the Hostel. One by one the guests of the evening drop in. It’s a real rogues gallery and amongst them we find a gambler, an “adulterous” couple, a suicidal man, a seductive con artist, a biker gang with a lust to party, get high, and laid and a bunch of bandits all pack into the hostel and its many rooms, up to the point where the Landlord has to refuse patrons entry to the hostel. 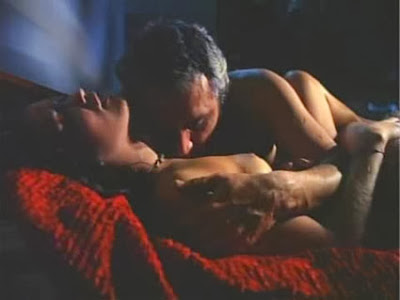 A storm rages outside and finally moral is tested when one of the staff finds a loaded wallet on the floor, but as she stretches out to grab it, it turns into a big terrifying spider. It may be one of the longest build-ups ever, but somewhere around midpoint the biker gang get naked, the adulterous couple start having it off, the gambler makes panic decisions and the bandits start to count their loot!

Well to be honest, the movie really only adds characters to the rooms of the hostel, without any real logic to who the Landlord let’s stay and not. A man who crashes his car get’s out of the wreck and wanders into the lobby. The Landlord rejects him, and despite the man’s stern warning of “Do you not know who I am?” Marins sends him on his way. This tiny of subplots evokes some kind of mini-threat as the man threatens to come back with officials to see to it that the establishment is punished for sending him back out into the rain! 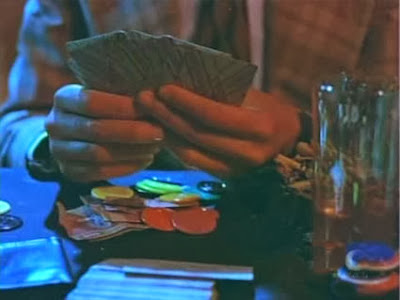 So you have all these patrons going about their business in their respective rooms, shagging, drinking, gambling, wrecking others, and their own, lives… until the clock strikes doom and they are all interrupted, one by one, by the cold hard stare - accompanied by crash edit and screeching audio - of the Landlord, who questions their acts! The suicidal man get’s a second chance after seeing his fate as dead, the con-artist see’s how his ways lead to a deadly triangle, of jealousy and the bandits see how they are shot down in blaze of glory as police gun them down, bikers all have a fatal accident. All of it shown in stylishly surrealism with the most god-awful rendition of Auld Lang Thyme ever warbled out on the soundtrack.

But the real question is… Is the Landlord presenting the guests with foreboding visions of what’s to come, hence giving them the chance to redeem themselves… or is he in fact showing them the terrifying deeds and events that lead them to his little establishment! 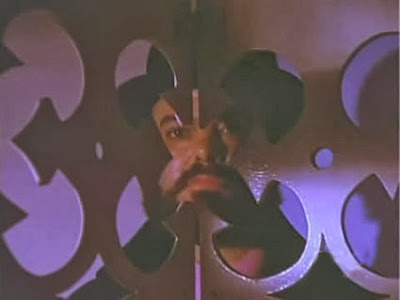 Yes, you guessed it right, as so much of José Mojica Marins world; Strange Hostel of Naked Pleasure is all about symbolism and deeper meaning, the fantastic approach to the subject matters taken by Marins. The hostel is as you probably already figured out a metaphor for purgatory. Hardly surprising and a recurrent theme in all the Coffin Joe movies, the vision of what is to come! The visions we see here, are all renditions of what lead the characters to end up in purgatory, or the strange hostel of naked pleasure – because almost everyone there gets naked at one point other. But it’s not all gloom and doom, one patron, Miriam, is saved as the light comes and summons her out of the hostel.  As she steps towards the psychedelic lights, her name vanishes off the Landlords book of souls as she walks out the door accompanied by a really off kilter rendition of Handel’s Hallelujah. 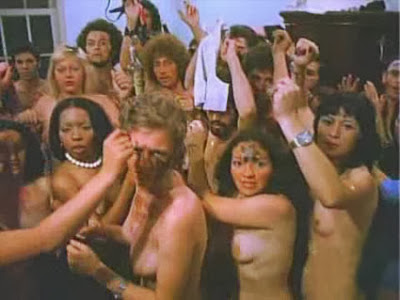 Finally, the last string to tie it all together, is pulled. The man from the car accident returns to the scene of the crime along with armed police. They exit the vehicle and the man stares confused off screen. “But it was here… I swear it was here…” he blurts as the coppers laugh at his confusion and explain that the old cemetery has always been there.  The landlord fades in as he walks the cemetery and up to the front porch of the hostel. The Vacancy sign appears and we understand that all’s set for the next batch of guests, although the Landlord has one last shocker up his sleeve for us… 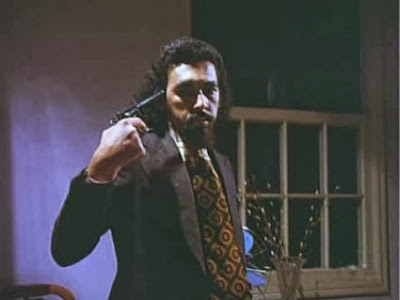 The movie moves at a slow pace, and just like the opening segment, almost every scene goes on for just a tad to long… but it’s Mojica Marins, and for that reason alone it never really gets tedious, as you never know where he’s going to take the next twist of the plot. Because even though it is a terribly thin plot, there is one and it does lead forth. Marins doesn’t get up to much mischief either, he’s just checking people in and shocking the life out of them with his stunning insights… so I can certainly see how people may see this as a rather bland José Mojica Marins movie, but at the same time, there is so much great stuff going on here. Much of the film is classic Marins, with reptiles, insects, fab lighting possibly taping into a Mario Bava-ish prime colours approach, the uncannily “to close close-ups” of Marins unibrowed eyes, super imposed images and a great, great mix of eroticism, horror and surrealism.

Co-writer Rubens F. Luchetti had previously worked with Marins and would again on a few occasions along the road, all of them collaborations with the common denominator that they where something of celluloid quilting’s of fragments held together by the wraparound stories that bookended the movies. 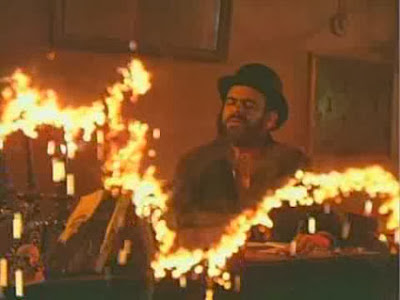 The soundtrack to Strange Hostel of Naked Pleasure sounds like woozy discarded Residents filler, but delightfully catchy and brooding! Marin’s regular cinematographer Giorgio Attilli comes up with some spectacular in-camera effects, blood rain, fire on screen, and that great lighting. There’s spiffy and effective editing! Audio that crashes into the soundtrack like a train wreck, all to that effect as this is most certainly what Mojicas and editor Nilcemar Leyert where after. The edits where intended to shock the audience, and keep them on their feet, which is exactly what they do. Nudity, freaky lighting, insects and reptiles, and open-heart surgery shots and a skull that cries blood in guilt are just some of the sights that José Mojica Marins serves up in this low budget, but at times, highly impressive piece of suggestive surreal horror! 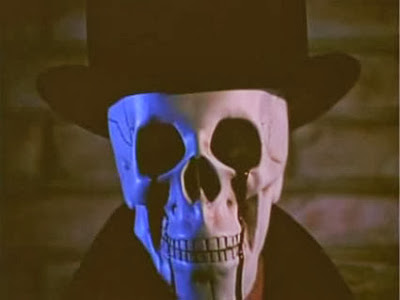 As far as I'm concerned, either you get behind José Mojica Marins visions and support it full-hearted, or you stick to watching ludicrous mainstream generic bullshit and never dare walk the alternative side of genre cinema again.