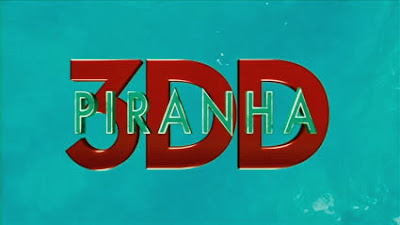 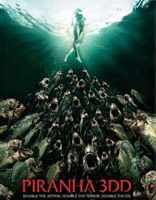 I didn’t want to write about this flick here, because it’s going to stand out like a sore thumb, a nail in my eye each time I see that it’s on here… but this terrible, terrible movie is kind of the of stuff I have to answer for when people question why I watch horror.  And that makes me mad. 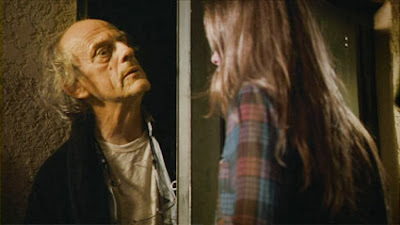 So why the hell am I watching this flick to begin with? Well I was bored senseless, was at my house in the countryside, and didn’t have enough stuff with me that I wanted to watch. Looking thorough the pile of watchers I have out here, this one struck my eye… Oh, that one… that disc I picked up as a “filler” in a five for a tenner box last summer… So, I decided to see if it was just as terrible as people have said – and with that said, never forget that I’ve got mates who hold Texas Chainsaw 3D and Apollo 18 as great flicks, movies I through where at the best mediocre, and THEY said that this film sucked! But despite their warnings I ventured into this stinker filled with fake optimism and the idea of “Well Feast was kind of cool, can it really be that bad…?”

Yes, Piranha 3DD is bad. Really bad…this is the kind of shit that gives genre cinema a bad rep, the kind of movie that makes stuff like the Hatched films look like an arthouse movie! Why didn’t I listen to reason and not waste just over an hour with this crap? 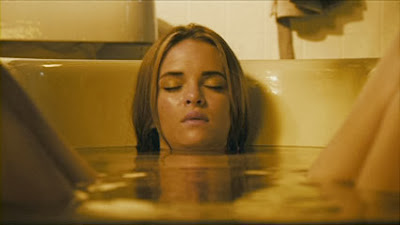 So what was Ok?
I really liked the recap and use of backstory as Victoria Falls, once Spring break capital of US, has fallen into oblivion and abandonment.  Then the neat first five minute appearance of Clu Galager and Garry Busey and the dead cow… but then it all went the same way that the dead cow did…. It got slightly, slightly interesting when Christopher Lloyd made his appearance, but the lame-ass back to the future jokes don’t belong here. The single best two scenes, which probably where lost completely on the target key audiences, where : the brilliant Wes Craven Nightmare on ElmStreet bathtub dream sequence, which at the same time doubles for a Cronenberg’s Shivers homage, and the fun use of Spielberg’s “shark attack” camera/focus shift as Jaws becomes a fact. Here used as a gag featuring Hasslehoff and the piranha attack. But that’s just about it… it’s not even a fun quirky tease like the first one, just fucking dumb… and insulting.

So on to the bad… well, neither you nor I really have the time for that; let’s just list them down as this…
The neat first five minute appearance of Clu Galager and Garry Busey and the dead cow, which goes south when they start blowing stuff up with dead cow farts… and that totally non explanatory migration of “Piranha eggs!" Oh boy… 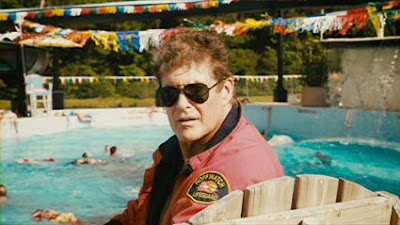 David Hasslehoff, who seems to be stuck in a nasty cycle of taking parts where he mocks himself and possibly thinks that he’s ironizing his classic Mitch role (or as here and in Sponge Bob Square Pants: The Movie amongst others...), himself, without realizing that the jokes on him!

Way tired use of the classic overused GREED over SANITY excuse, just like The Hoff’s “ironic” appearances it was fun the first time around, this far up the road it’s just lazy.

Cameos, just for the sake of cameos. Someone please put Ving Rahmes out of his misery… and what’s up with the totally stupid rip off of other better movies… as if none of us ever saw Rose MacGowan’s machinegun leg in Planet Terror?

A male character performs self-castration and doesn’t even hesitate, or show signs of pain, and the dick joke was used in first flick, so now you are ripping yourself off too.

The movie doesn’t even have real end-credits… there’s a stupid Hasslehoff shtick, then some outtakes and more Hasslehoff shtick for no real reason but to fill out the shitty movies runtime, as it’s not just barely an hour long without all the tagged-on-to-the-end crap. Sadly only proving even further that Hasslehoff is completely unaware that he’s being exploited too. 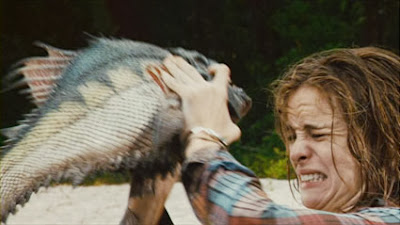 The totally lame-ass set up for a further sequel… Does John Gulager have no self-esteem? Is he happy playing middleman to what is definitely going to be a total failure of a franchise? Didn’t’ he have enough guts to get in there and make something unique with this… as Alexandre Aja does with every “reboot” or “remake” swizzle he get’s in on. Which is why his films constantly turn up on “best of the year” lists!

There’s not even any real disturbing gross-out moments here either! Remember that - hair tangled in the boat propeller and face torn off - moment from Aja’s original? Well that’s the kind of fun and shock horror that Aja brought with him. In this one there’s not one such moment at all, and No, a piranha in some fat stoners ass doesn’t count. If his whole goddamned system of entrails came pouring out of his ass along with the fish, then yeah, but no. Oh, and that’s the same character who several times fucks the “out water nozzle” because it’s “Insanely wet”. Just another reason to suspect that the writers are a bunch of fifteen-year-old geezers too clueless and in need of a wank for their own good…. But the final piece of evidence to prove this… 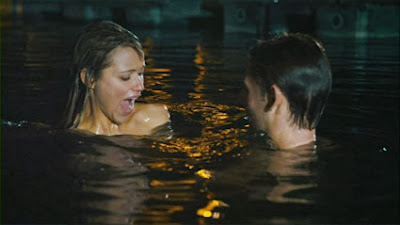 Piranha hiding in woman’s vagina, and biting her boyfriends dick! Come on, are they even remotely familiar with the female anatomy? I guess this is what you get when a bunch of “blokes” sit down to write a script and obviously don’t have a clue about how it works at all. I can get behind a lot of crazy shit for the name of genre, but a mutant monster fish hiding, and growing, inside a chick’s vagina and she’s not supposed to feel that it is up inside of her isn’t one of them.

The total lack of “tongue in cheek”, tease and play with genre conventions that the first film had. Whatever you may have thought of Alexandre Aja’s Piranha3D back in 2010, it at least had fun and toyed with the whole premise of chicks in bathing suits and female objectification, almost ironizing and mocking what sadly has become a genre convention. Just tossing a shitload of big-titted women and voyeuristic crotch shots on screen, is just a load of bullshit, and you know what, so is the seriously misogynistic “Cooch-Cam”. Before you shout hypocrite, just let me point out that there’s a difference in nudity in seventies exploitation and something deliberately made with in the system by a company once owned by Disney.

Howdy. Yes this team of John Gulager, Patrick Melton & Marcus Dunstan (who got their start from that tv show Project Greenlight) have really made some shit, but this is the absolute nadir of their careers. Just an awful, dull, sexist piece of garbage. Feast III was pretty much unwatchable too. Blech.

Yeah those fuckers should give that greenlight thing back. Even if it does mean Feast being undone. Awful awful crap movie.