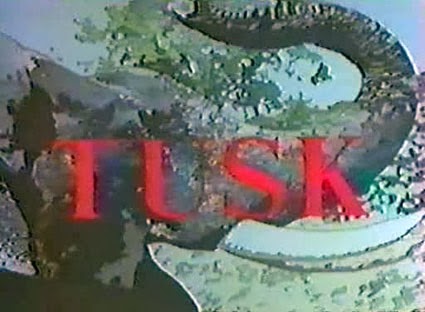 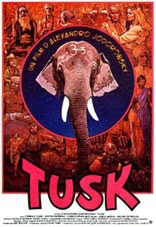 Alejandro Jodorowsky, man of mystery, man of myth, man of magic. The eighty-five year old Chilean born director has but a half dozen movies to his name, but is still considered to be one of the most daring and original visionaries to ever grace the screen with his images and philosophical narratives.

Lost films. Every director seems to have one. Every fan seems to find it. Tusk was (may still be) Alejandro Jodorowsky’s lost movie. The first time I saw it was off a VHS dupe, not too unlike the one I watched this time around, but this one was obviously a few generations closer to the source and actually had English subtitles. The first viewing all those years ago on a dodgy tape from VSoM – hey there was no Internet back then right! – was perhaps not a fair judgment of Jodorowsky's vision. That time around Tusk failed to leave an impression. I probably only watched that tape once. El Topo and/or The Holy Mountain where more to my liking – and obviously Santa Sangre, but Tusk never really went down well with me. Perhaps because back then I wanted it to be wild and surreal like those other films… Re-visiting it today, it’s fair to say that something’s do change and where I may have missed certain traits that I back then would have said where typical Jodorowsky, they are undoubtedly present in Tusk. 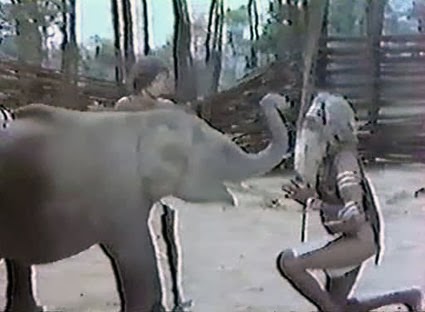 On the same day as plantation owner Morrison’s first child is born, the largest elephant of the herd also gives birth to an elephant cub. It’s the start of two destinies, which will intertwine and depend upon each other for the rest of time, shown clearly as Jodorowsky crosscuts the two deliveries. Plantation owner Morrison [Anton Diffring] is severely disappointed it’s not a boy and turns the child over to one of the female villagers to take care of. His butler acts fast, and returns the infant to it’s still in father… who breaks down, cradles the baby and names her Elise. A few years later Elise (now at age five is played by Oriole Henry) is given an elephant of her own, the elephant Tusk with whom Elise shares her birthday.

Two antagonists (or rather sub-antagonists, as the piece deals with several of them and in various combinations) are introduced into the piece, Shakley [Michel Peyrelon] and Greyson [Serge Merlin, who later starred in several films of Marc Caro and Jean-Pierre Jeunet]…in many ways classical Jodorowsky antagonists, farcical, goofy and filled with slapstick and mime articulations, but also dark and disturbing. They are more the surreal kind of characters that otherwise fill Jodorowsky movies, disturbing facetted fiends swinging between sadistic and moronic. They fart, crack jokes about the stench, smoke Camel hairs, drink till they pass out, but at the same time they are ruthless bounty hunters who will stop a nothing, no matter how fiendish it be to achieve their goal.

Back at the ranch, it’s time to break Tusk and put him to work with all the rest of Morrison’s elephants. The scene is strong, violent and provoking leaving Elise terribly distressed. Morrison tries to reason with his daughter, and delivers the non-comforting explanation that, one day she will understand Tusk cannot be a wild animal, but a worker. Elise hides herself in her room and refuses to eat. When the young Elephant cub starts refusing too the bond is apparent.“So he’s going to die!”  The Village Mystic arrives and Elise is given a false promise of Tusk being “freed”, after which she talks to him and he eats. For the time being all is well, Elise and Tusk lead happy lives but we know otherwise... 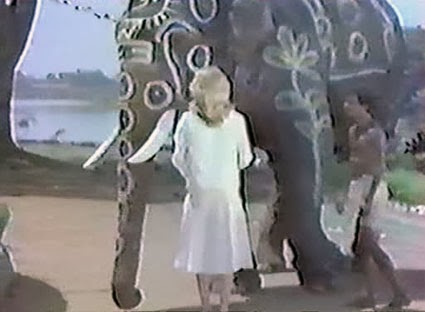 Time passes; adult Elise [now played by Cyrille Clair] is about to leave home, travel overseas to England and attend school, briefly illustrated through transitional illustrations. With Elise out of the way for a while, enter Mr Richard Cairn [Christopher Mitchum] a complex character who’s both a fiendish elephant hunter, bit also holds the strong love interest position for Elise’s heart.

Elise returns home from her time abroad, but the celebrations soon come to an end when Ram Baba [T. Venketappa] attacks Samadi [B.N.K. Nagaraj] Tusk’s warden. Tusk [now portrayed by Menoara the elephant], ever the faithful one, looses his and goes off on a min rampage. Luckily Elise steps in right on time and calms down the giant elephant merely seconds before Mr Cairn was going to put a bullet through the beast’s brain. This incident ignites a subplot concerning Ram Baba – now degraded to serving in the cow shed and never to work with Mr Morrison’s elephants ever again – as he demands vengeance on Mr Morrison, Samada and Tusk for this loss of face. 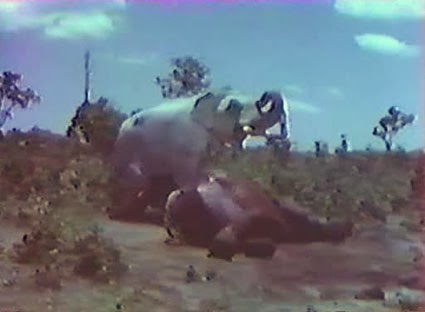 Despite his own elephant escaping and rampaging the countryside, Ram Baba teams up with Shakley and Greyson and hatches a plan to steal Tusk! As she sit’s meditating at a water filled temple, Elise senses Tusk’s kidnapping and runs to him only to be confronted by Ram Baba’s mad elephant…Guess who comes to her rescue –TUSK – cue, elephant fight complete with bloody tearing, gory tusks and dead antagonist elephant! A magnificently wonderful Jodorowsky moment!

In the emotional state after her close call with death, Elise understands that Tusk want’s to be free and pronounces him such. He runs off! But his freedom is short lived as the Eccentric Maharaja’s [Sukumar Anhana] wife wants an ivory necklace made from the tusks of the great warrior elephant, and also requests to drink his blood and steal his power…

The hunt is announced, … Elise is disgusted, but she still takes part in it – and damn does the amazing cinematography by Jean-Jacques Flori, demand a proper release now, as there’s some great stuff here, some stunning shots, as an impressive amount of elephants participate in the climactic hunt. Ram Baba and cohorts have come up with a new plan and that is to snatch Tusk from the massive hunt, as they now realize his value and can use it to make a deal with the maharaja.

Ram Baba with his partners in crime, Shackley and Greyson, plan to snatch Tusk during the hunt, as they know of his value! But the two somewhat comedic characters show their dark side as they lure Samedi up a mountain cliff only to toss him over the edge to his death and then double cross Ram Baba as they sniper shoot him from the mountainside! 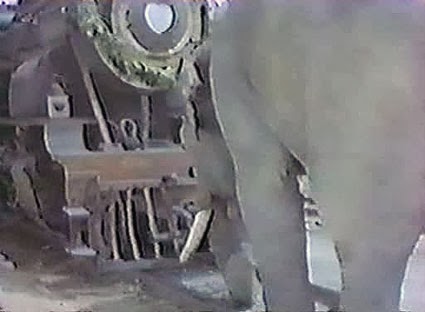 Mr Cairn’s get’s to show off his hunting skills as Tusk is snared, held in a giant cage, and the Maharajah’s fiendish wife gets her cup of Tusk blood and Elise is devastated! But no cage is strong enough to hold the mighty Tusk, and after a short struggle, he breaks free and goes on a rampage!

Walls are smashed, busses are tossed over, and Tusk even pushes a train backwards as he makes his stand. The kind of thing that makes us all root for the beast and cheer him on… and cheer him on is what we do for the last twenty minutes of the movie, where Tusk settles scores, rights wrongs and makes the world a better place! Phew… Tusk is very much a Jodorowsky experience, without any doubt in mind!

Based on Poo Lorn L’Elephant by Reginald Campbell and adapted by Nicholas Niciphor, who also served as one of the many co-directors on Deathsport together with Allan Arkush and Roger Corman. The original source material could be interpreted as some kind of critique towards the colonization of India, with elephants and the characters as metaphors for empire and occupied country, although that’s not really the way  I see Jodorowsky using the material. Here it’s put into work as a classical Jodorowsky narrative.

Sandwiched in between The Holy Mountain 1979 and Santa Sangre 1989, Tusk is, as the opening titles declare, “a panic fable” and even though it may not be quite as wild and surreal as some of his work, it is without any doubt a very typical Jodorowsky movie. His common themes of revenge, justice, dark comedy and absurd violence, are all here. Many times a serious scene will end in a laugh, or a comedic scene will end in something serious. Violence will lead to tenderness and tenderness will lead to violence. The classic Jodorowsky magik and surrealism is found too, such as the Indian mystic who can transform himself into a chicken! 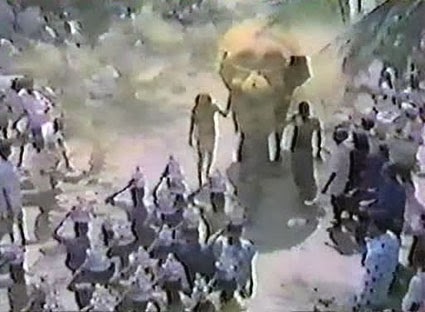 Tusk sports a fantastic soundtrack, groovy sitar, fuzz tone guitars, and way weird synthesizer pop, yet another reason why Tusk needs to see a proper release.  Why not a soundtrack re-mastering and re-issue while your'e at it?

There’s a reason why they certain movies become “lost”. At times its due to director negligence. As for Tusk, the movie has slipped into the void after fact that Jodorowsky himself disowned the film due to the politics of meddling producers. When will they ever learn?  In any which way, Tusk certainly is a Jodorowsky movie, and I’d love to see an official release of it. Seriously, not even the bootleg versions one can find have even a decent image, hence the lack of screenshots in this piece. This is one “lost movie” that needs to be rediscovered and presented in a proper release, because at the end of the day there can never be enough Jodorowsky movies out there.