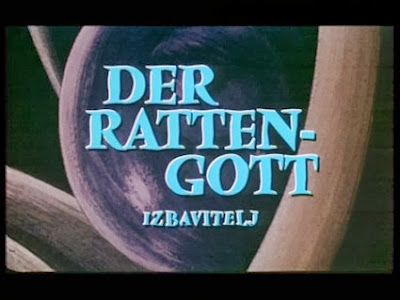 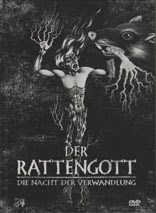 Somewhere along the line the fine art of horror was perfected by Europeans, and the closer you get to the dark core of the art-house the finer their movies become. Filled with symbolism, suggestive imagery and metaphors, 70’s and 80’s European art-house horror is easily amongst the finest woks of genre cinema to be seen. Being a cineaste and admirer of the horror genre, and there’s always new movies of this time period to discover… so every time I feel a craving for something original and unfamiliar, I turn to European art-house and the horror themed flicks that are hiding there. Out of luck, broke and kicked out of the room he’s renting, writer Ivan Gajski [Ivica Vidovic] takes to the streets of his home town to sell off the few books in his possession. It’s on the crowded vibrant town square he bumps into Sonja Boskovic [Mirjana Majurec]. Guess what, despite this being a horror themed drama, there’s a minimal subplot which obviously is the love story between Ivan and Sonja. Yes, it’s minimalist, but it’s important for the story and I’ll get back to it in a moment. Sonja buys a book or two from Ivan and that’s that, Ivan takes off looking for somewhere to crash. After being commanded to shift off out of the park he meets a friendly night guard who shows him a secret way into a large abandoned bank where he can spend a night out of the cold. Ok, ordinary world established – broke, social outcast with a bohemian lifestyle and ambitions of being an artist- it’s time to bring on the shift into the unnatural. 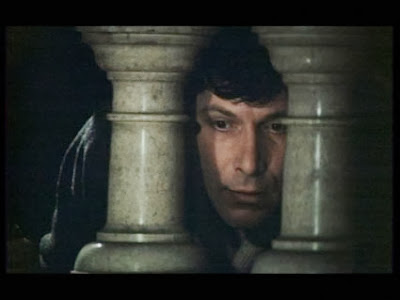 During his urban exploration of the scabby, abandoned building, Ivan makes note of cupboards filled with bread, cheese and wine. It’s also then that he hears sounds coming from one of the larger central halls. Sneaking out on a balcony to see what the commotion is, he sees a strange banquet where the guests are indulging in cheese; copulation and all have features familiar to rodents. The guests are rat-people and when their leader, the rat savior makes an appearance it becomes apparent that the rats are taking over the villagers hence creating their own utopian rat state! The next morning he brings the police to the building but no trace of the rat banquet is found anywhere. 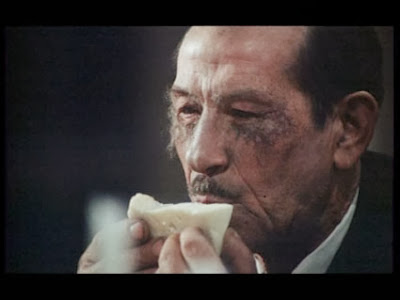 Ivan is plunged into a nightmare existence when rat-men later step out of the town shadows and start to pursue him, most likely with the intention of killing him, as he’s overheard their fiendish plans for domination. Narrowly escaping them he encounters Professor Martin Boskovic [Fabijan  Sovagovic], father of Sonja who Ivan sold his books to earlier, and the rat savior’s nemesis. The struggle for mankind as we know it has begun and now its up to Ivan and Professor Boskovic to save it!

The Rat Savior is a gorgeous movie, a fascinating movie, a movie filled with almost Kafkaesque paranoia, excellent use of doppelgangers filling in for characters and adding to that paranoia –I’ll compare it to another classic doppelganger flick in a moment -  and I’d claim that there’s an almost Dostoyevskyan theme to the film where Ivan comes to a terrifying rush of insight when his struggle for survival takes a deadly turn. 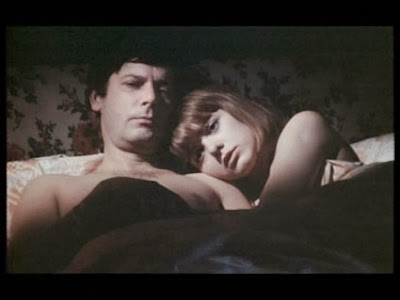 It’s hard to watch European films from this time period without reading satire and political metaphors into them. In most cases it’s there for all to see, in others it’s more hidden in the discourse. The Rat Savior may be completely apolitical and could be watched as a simple trippy tale of rats and doppelgangers. Or you could look at it as a piece of political metaphor, possibly questioning the fate of Yugoslavia as a communist state when their leader [Josip Broz Tito], at the time, recently voted President for Life and now a frequent visitor to and with capitalist countries and leaders. This could quite possibly be seen as something of a prediction of the internal politics and fractions that would take the many countries held together under the name Yugoslavia into a devastating civil war a few decades later. 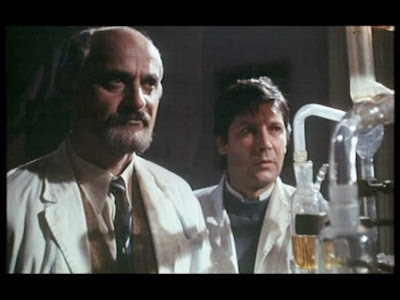 Now I’m no political historian or possess any real knowledge of Yugoslavia in the seventies. Although if there’s one thing I do know, it is that metaphors that work in one way on one side of the world, often tend to work similar on other side of the world, even if polarized ends are switched over. Don Siegel’s Invasion of the Body Snatchers was a metaphor for Americas fear of communism and the almost dictatorship paranoia that McCarthyism brought with it, so a movie that uses the same kind of symbolism in it’s own reflection on politics is obviously trying to say something about the state of the country.

There’s a fascinating atmosphere that may possibly be influenced by stuff like Siegel’s Invasion of the Body Snatchers, Murnau’s Nosferatu and eerily enough, the movie holds the same kind of brooding doom, end of the world-vibe and atmosphere that one would identify as significant tone of Andrej Zulawski’s Possession, Werner Herzog’s Nosferatu: Phantom der Nacht, and Philip Kaufman’s remake of Invasion of the Body Snatchers, all made after Krsto Papić’s The Rat Savior! 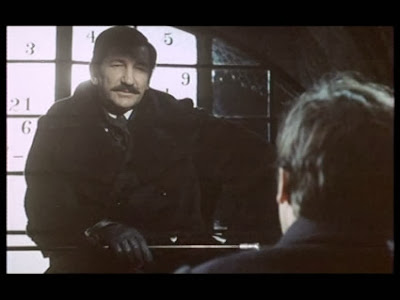 The Rat Savior was based on a short story by Russian writer Alexander Grin, who’s stories mostly took place in his imaginary world Grinlandia, most likely a way to allow himself to write his stories of adventure, fantasy and love (with obvious metaphorical satire) without being accused of criticizing the state. A few years previously Tom O’Hogan directed the farcical comedy Rhinoceros featuring Gene Wilder and Karen Black, freely and loosly based on Romanian playwriter Eugen Ionescu’s play of the same name. Ionescu’s play was most likely inspired by Grin’s short story.  Rhinoceros tells the story of a small French village where the inhabitants all turn into rhinoceroses… all but one - sound familiar?  Supposedly Jay Lee’s Zombie Strippers is a really really loose adaptation of the same play... but they all are tied together by them all using the same metaphorical animal and human symbolism as Franz Kafka did in Metamorphosis. 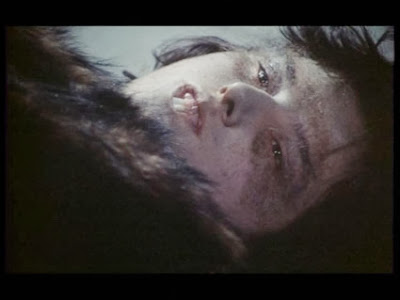 Director Krsto Papić won several prestigious awards during the fifty years he was an active filmmaker, and left a legacy of twenty plus features, shorts and documentaries behind… In the late 90’s a poll amongst Croatian film critics came to the conclusion that The Rat Savior was one of the finest pieces of cinema they had in their history of film. I’d have to agree and also recommend it highly for fans of atmospherically laden horror with an art-house vibe and suggestive narrative. Once this one has bitten you, the infection will slowly spread, and finally you’ll agree it’s a gem!