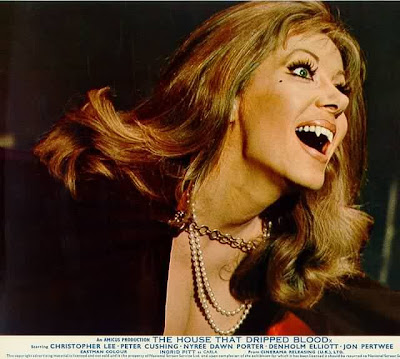 An iconic leading lady, who it would be an understatement to claim being the most important of all the Hammer Horror women. Definitely the most sensual actress that ever walked through Bray studios in a skimpy transparent nightdress. I grew up with Ingrid Pitt. I really did. As a child I used to read the Hammer Horror comics, where she was featured quite often. The older I got, the more I started watching the movies, not to forget her reoccurring parts in Doctor Who adventures. I obviously started reading the books on Hammer and Pitt, and naturally I started seeking out her other movies when I got into collecting videos.

Pitt brought something else to the screen in the movies she figured in. Be it the Hammer stuff ranging from Roy Ward Baker’s Vampire Lovers 1970 to the reboot web series Beyond the Rave 2008. The Amicus film The House that Dripped Blood 1971, the gritty war movies, the TV serial appearances or just the small parts that she held in movies like Brian Hutton’s Where Eagles Dare 1968 or Robert Hardy’s The Wickerman 1973, there was just something special about her that really reached out from the screen. 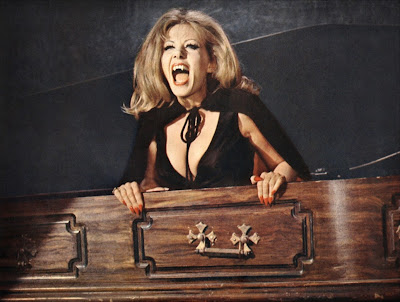 This past year I was lucky to get a quick glimpse of Pitt at the World Horror Convention, which I talked about here earlier. Simply being in the reach of genre cinema royalty was enough, but apart from actually seeing her in the flesh, one of the greatest Pitt moments may have been listening to her talk about Peter Sasdy's Countess Dracula on the commentary track to that film. There’s a wonderful honesty and joy as she tells stories of how she got into the movie business, how she made determined decisions to become the iconic woman she finally became, and working for low budget cinema. It’s a brilliant commentary track which Pitt completely rules and it quite obvious that she enjoyed every minute of being on set, in front of the camera and giving her performances all she could.
It shows, and that may be that presence that shines though with her movies. Ingrid will never fade away from the memories of so many nights watching her great performances on screen. A legend in her own time who's untimely deptarture has left me shocked and sad as this was completely unexpected. 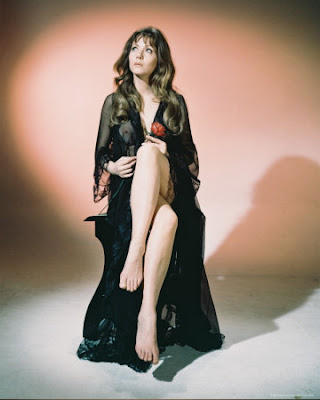 Until you feel the urge to drink our blood once again,

Really nice obit J. You obviously had a lot of love for her...

Yeah.
Ingrid Pitt, Sarah-Jane Smith and Bananarama. Childhood crushes, but only one stuck with me for life.

Sarah-Jane huh? It was Leela all the way for me. ;)