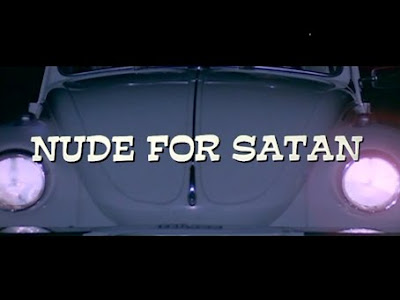 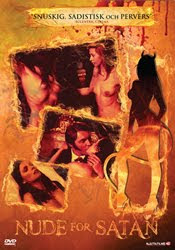 
Dr Benson [Stelio Candelli] on his way to an emergency call to the Whitmore house get’s himself lost and instead comes upon a “crashed” car. Being the good doctor that he is, he stops, gets out and finds Susan [Rita Caleroni] amongst the wreck. Promising to return with help he takes off to the large mysterious castle he previously asked directions at. Roaming around the eerie mansion he comes across a woman who looks just like Susan, and she insists on calling him Peter. Peter, who she claims to have been waiting for, for so long… Somewhile later Susan arrives at the castle too only to meet a man who looks just like Benson. With them both in the castle and a sinister strange man, [James Harris], taunting and luring them on, a surreal erotic nightmare starts to unravel as the Benson and Susan wander the dark corridors in search for each other. 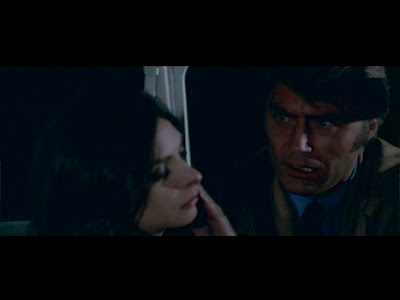 Luigi Batzella, native Sardinian and man of many pseudonyms, Nude for Satan as Paolo Solvay, may not have been a great filmmaker, but he certainly made movies that leave an impression. No matter which genre he tried his hands at, he came out making some trashy pieces of low budget sleazy exploitation cinema. With a mere fifteen movies as director and several more starring in minor acting parts, Batazella left a decent legacy of tainted and perverted movies, which more than often brought a heavy dose of sexploitation to the subgenre he was tinkering with. 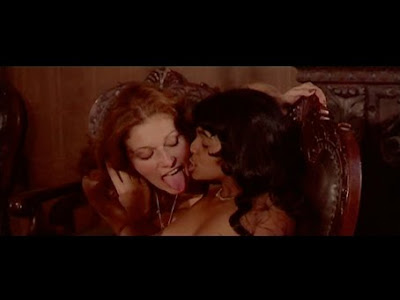 Perhaps best remembered for his string of Nazisploitation flicks; Kaput lager – gli ultimo giorni delle SS (Achtung – the Desert Tigers) and La bestia in calore (The Beast in Heat) both 1977 it should be noted that Batzella directed movies in the customary Italian Director for hire spheres. Spaghetti Westerns, War flicks, Action adventures, the Nazisplotation flicks and he also co-directed Bruce Le’s Challenge of the Tiger (aka For Your Height Only) 1980. Many of Batzella’s movies saw him working with American B-movie actors Gordon Mitchell and Richard Harrison who found new fame in Italian low budget fares, and Batzella wasn’t directing genre names, he was stood amongst them in the many movies he held smaller acting parts in. 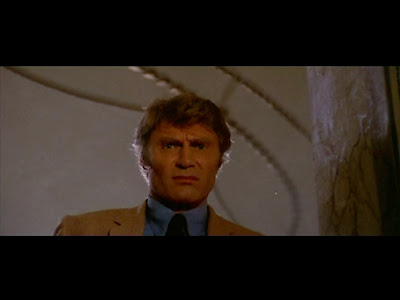 But the movies that possibly are amongst his best, the occult sexploitation pieces Il plenilunio delle vergini (The Devils Wedding Night) 1973 starring amongst others Mark Damon and Rosalba Neri and Nuda per Satana (Nude for Satan) 1974 with Rita Calderoni starring against Stelio Candelli who has some great movies on his resume. Both these films deal with the witchcraft and the devil having it off with some scantily clad lads and lasses and are quite heavy on the old satanic orgy material. Atmospheric pieces that certainly will have any one keen to Satanism, nudity and the corruption of mankind happy. Obviously exorcised by censors throughout the years, it’s quite entertaining to see Nude for Satan restored to it’s full gritty sleazy glory, complete with lesbian romps, satanic shagging and triple-X inserts, even if it is quite dully assembled at times, but I’ll get back to that. 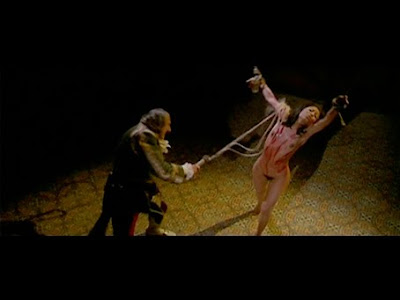 There’s often a lot of flack given to the directors working within the low budget sphere. If it’s not the shabby camerawork or bogus sets, it’s poor plots, bad acting and the recycled footage that frequently returns in their movies. But in all honesty this should be praised instead of criticized, because this is a solid testament to how dedicated these guys where to completing their movies and giving them that little extra fluff. Instead of skipping an establishing shot or a mood image, they simply dug into their archives and pulled out some previous used stock footage and they had the shot they needed. Most likely staying within budget too. It’s much like Bruno Mattei’s stock footage in Hell of the Living Dead or Jess Franco’s constant zooming in his Artur Brauner produced movies during the early seventies, the quick fixes became trademarks and also allow the director to complete the movie within it’s own limitations. 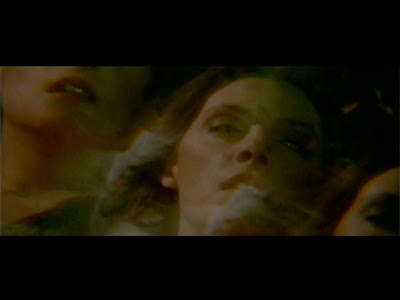 Anyways, returning to Nude for Satan… What a bloody great title that is - it leaves nothing to the imagination, and it's precisely what this movie delivers, nudity and satanic orgies. Yeah it’s cheap and dirty, but it’s pretty entertaining too. It’s no understatement that Nude for Satan is amongst Batzella’s finest movies. Story-wise it’s an interesting piece as there’s a kind of art house narrative going on, where the house acts as some kind of parallel universe run by the Devil [James Harris]. Well inside the house, Dr Benson and Susan separately meet their doppelgangers Peter and Evelyn, seeing both Calderoni and Candelli in dual roles as they try to figure out what happened to each other. Benson wants to reunite with Susan instead of the doppelganger Evelyn and vice versa. At the same time there’s sort of a tragic ghost story going on where the Peter and Evelyn characters long to be reunited. It certainly is trippy, dreamlike and at times, in comprehensive, but that all makes sense at the end of the movie. After confronting the Devil, the screen dips to black, Dr Benson get’s out of his car, located at the spot he slammed his brakes on in the opening, and runs to the aid of the young woman in the crashed car at the side of the road… Susan, but this time holding the medallions from her dream. Yes folks, it’s all been a frightening, surreal erotic nightmare taking place in their heads… or has it? Well whatever Batzelli intended, the ending is kind of a question mark, but at the same time, I wouldn’t have wanted it to end in any other way. How boring would it have been if Benson saved Susan and beat the devil! Instead there’s a window into a world where Satan has corrupted innocence, as Susan obviously didn’t want anything to do with the saucy Satanism until that orgasmic finale complete with laughing Satan, naked dancers and a depraved Paul snogging Susan into eternal damnation. 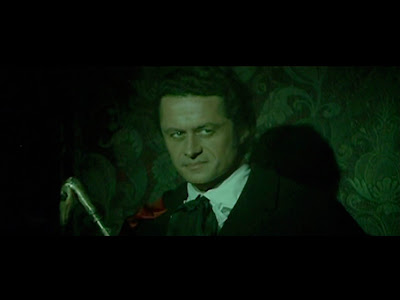 Batzelli also edited the most of his movies himself, Nude for Satan was no exception, and perhaps this is where some of his greatest talent came into play as the movie is pretty effectively assembled. In all honesty it’s really only the sex scenes that linger on too long primarily due to the graphic inserts. Due to their obvious different actors, sets and sloppy editing, I can't help but asking the question if Batzelli himself actually inserted the scenes, or if it was under protest, driven by some greedy producer or distributor. These scene have obviously not been given the same attention as the rest of the movie. Whatever be the reason, the movie, strangely, failed miserably at the Italian box office at the time. 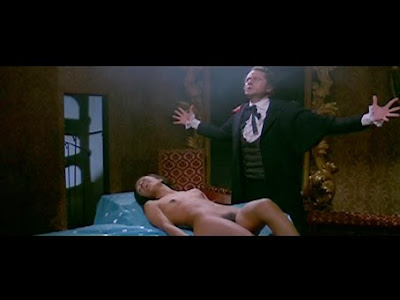 Starting with Calderoni running naked through the woods in slow motion, whilst thunder and lightning flash and rumble, accompanied by the crooning vocals set to Alberto Baldan Bembo’s score efectively set’s a tone and mood for the piece. It certainly has a great Italian EuroGoth vibe going on and the first fifteen minutes are really atmospheric with Benson exploring the large windy cobwebbed creepy mansion and eerie score until he opens a door, gasps in shock as he stares at the mixed doubles nocturnal activities going on and sexploitation traits take over… but that’s not necessarily a bad thing is it. Although to do the movie justice, it really is more a EuroGoth mystery with some fantastic sexploitation moments than anything else, despite the seemingly random inserts. And there’s a really freaky spider scene that you won’t want to miss. 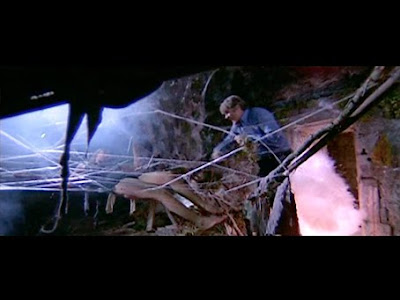 Strategia per una missione di morte ( Black Gold Dossier) 1979 saw Batazella direct his last movie. Struggling with ill health he retired from the movie-making racket at the young age of 55 and later passed away in 2008 at the age of 83. A renegade filmmaker who churned out some very memorable movies in his mere fourteen years as a director, some of them shot in less than two weeks. But never the less amongst his fifteen movies there’s still a few classic seedy gems, Nude for Satan is a must see movie for fans of crazy genre movies, and The Beast in Heat is still to this day Banned in the UK and forever immortalised as one of the original Video Nasties.

Luigi Batazella’s Nude for Satan in it's extended form is comming to Scandinavian DVD on the 1st of December, thanks to the team at Njutafilms.

I as well enjoy this one. Its one of the few surreal films that I dont find pretentious.

Love this film!
Seen it a good few times.
Together with D'Amato's Death Smiles At Murder it's one of the best seedy surreal Italian genre films, i think.
James Harris as the Devil is amazing.

Yeah it's some good shit indeed. Although I was kinda confused that the Devil was constantly calling for Astaroth... :)