Crazy Desires of a Murderer 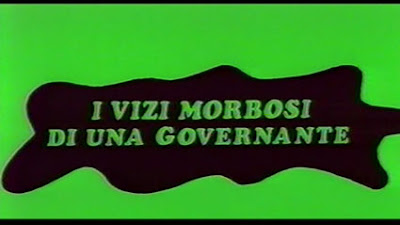 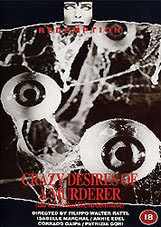 Giallo. I really love Giallo. I also love taking long periods of time where I don’t watch Gialli only to have them make such a larger impact on me when I return to the genre and get that “Oh shit, this is why I really love Gialli!” rush. I guess you could compare it to not smoking for a while, and then returning for that kick the first couple of drags gives you. I love movies that I can’t predict and the Giallo genre is filled with that kind of beautiful movies… not even ones I saw on video half a lifetime ago. 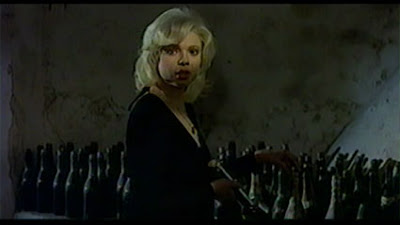 There’s something off kilter in the De Chablais castle. Young jet setter Ileana De Chablais [Isabelle Marchall, also seen in Sergio Pastore’s Sette Scialli Di Setta Gialla (The Crimes of the Cat) 1972 and Luciano Ercoli’s Troppo rischio per un uomo solo (The Magnificent Dare Devil) 1973] brings a bunch of shady types back to the castle for a weekend of party and fun. It’s obvious from the start that some of them have other intentions with the weekend, such as Pier Luigi [Roberto Zattini] who we see co-horting with mobsters he apparently owes money to. Bobby [Gaetano Russo – who’s only starred in some two dozen flicks, but still managed to score a parts in Stelvio Massi’s Cobra Nero (Black Cobra) 1984, Richard Donner’s fantasy classic Ladyhawke 1985, and Bruno Mattei’s second flick L’isola dei morti viventi (Island of the Living Dead) 2008] is a pusher who’s used his suave charm to exploit Ileana’s naiveté and smuggle drugs into the country through the antique vases she’s brought home for her father the Baron. Elsa [Patrizia Gorzi], refuses the invites of her husband Frank [Beppe Colombo – who only starred in a handful of movies but went on to become a successful producer on amongst other things Dario Argento’s La Stendhal Syndrome 1996] after he’s been intimate with Gretel [Adler Gray] and instead ends up bedding Pier Luigi instead… so you get the jest of things, they are not a very sympathetic bunch adding more reasons to suspect them all when the shit hits the fan, which it does so quite soon after the first night of sinful charades. White gloved hands wander the corridor, a knife is pulled forth… soon the knife is bedded into the soft silky stomach of Elsa, as she bleeds to death the killer shifts focus to her eyes. The knife that moments ago sliced trough her gut, sadistically slices out her eyes too! 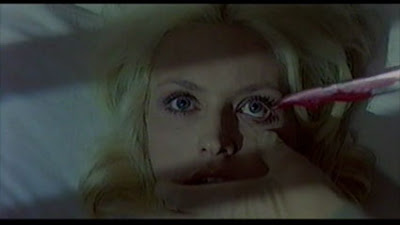 From here on it’s all fun and games kids, we guess frantically which of the sinister characters can be the killer, and become acquainted with new characters such as inspector [Corrado Gaipa – who you will recognize from shitloads of flicks], family doctor Dr. Olsen, the horny housemaid Bertha [Annie Karole Edel], the house janitor Hans, and the obvious one, Ileana’s weird brother Leandro – who mysteriously enough has something hidden in a box on the shrine he has in his bloody workspace... Several flashbacks point to Leandro, as he’s been strange since he witnessed his mother in several compromising situations when he was a child. The mother – even though only seen in flashbacks and the large looming portrait that hangs in the castle - also acts as a motor for the narrative, as she was supposedly buried with an emerald worth 150 million lire… with the dodgy bunch of characters presented, and the possibility of walking away with a large amount of dosh in hand, the plot can start to unwind. 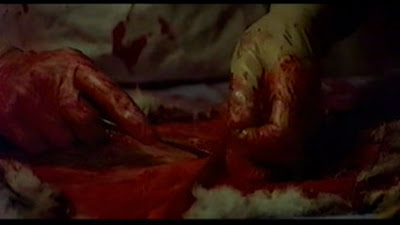 Surprise twists, unexpected events, background traumas, roofie spiced champagne, double-crossing partners, sultry ladies pouting their way towards fast riches, yes, it all here. The traits that separate the Giallo from the common thriller; there’s a character tampering with taxidermy, there’s saucy ladies and suave dudes who get their kit of if the opportunity is given, a glove bearing psycho wanders the hallways at night, a greed plot focusing on the jewels of the late Baroness, a funky soundtrack and lovely wide-angle shots of lightly dressed women running in poorly lit corridors. 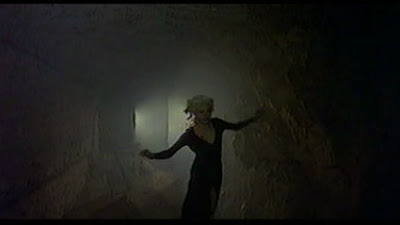 There’s an oddity to be found in the opening attack, which establishes Ileana – one yet another of her trips, and the Baron, and a suggested threat. A pair of bloodied hands roam the corridor, whilst it’s owner stay safe in the off-screen space. The hands wander into the Baron, who gasps and the movie titles – rather crap ones, but at least accompanied by Piero Picconi’s decent score – kick in. A strange opening sequence as the rest of the movie will show that it was all merely one of may red herrings laid out to trick the audience. Picconi’s score in all respect, but there’s more than one scene where I find my mind rushing off to connect the, either blatant rip off, or similar tunes from other movies of the time. 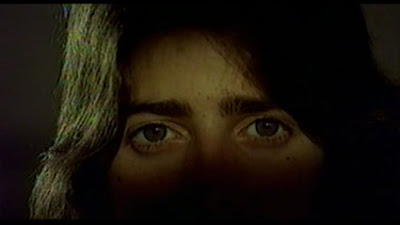 Extreme close-ups on eyes. A trait familiar from the world of Lucio Fulci, who indeed was a master of cutting to reactive images of eyes to create emotions within the audience. Similar shots find their way into Crazy Desires of a Murderer, which is kind of fitting, as there’s a killer who removes eyeballs in the plot. 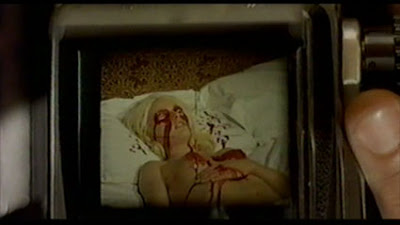 But despite a lot of common Gialli traits, Crazy Desires of a Murderer choses not to use the familiar one of the amateur detective. Instead we the audience are invited to figure out the mystery from the clues that are given. Well, being a later and lesser Gialli, there’s an obvious lack of vital ingredient that muddles the narrative. There’s nobody to root for, and none of the characters are that sympathetic. Now in almost any other genre this would be a major problem, but within the Gialli it works, especially as a lot of the charm is the who-done-it approach. As long as there’s some murder, some mystery, a cool score and some kinky romps, then I’ll stay with the movie and try to solve what’s going on. 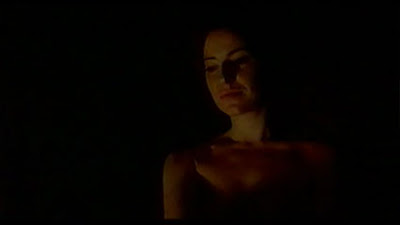 The movie looks every bit the part, cinematographer Gino Santini, gives the movie a treatment that certainly mimics the look and style much like similar, movies of the time. The corridor and cellar scenes are perhaps not originally composed when it comes to the lighting, but the shadow play of figures lurking down in the cellar is splendid. 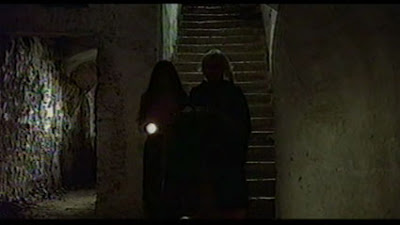 One area that I find to be lacking is the moments of sexual tension. Gialli needs a healthy dose of tantalizing or seriously perverse sexuality to keep it interesting. It goes with the territory, some movies more than others, but in Crazy Desires of a Murderer, the few moments of sexual activity almost feel forced into the movie and completely random. Even the soundtrack is sloppily pushed aside for something that sounds completely different to the otherwise rather groovy score. Oh, although there is a highly evocative scene concerning Elsa, Pier Luigi, and a candle, that really pushes the envelope of suggestive juxtaposition. Yes, it’s fair to assume that this DVD-R sourced from the old Redemption video release of the movie was a cut one, and most likely heavily exorcised version too as the writer of the script Ambrogio Molteni was on something of a high at the time with screenwriting credits on stuff like Bitto Albertini’s Emanuelle Nera, (Black Emanuelle) 1975 (and you know how that series took off from there on), Mario Gariazzo’s L’ossesa (The Sexorcist) 1974, Bruno Mattei’s Violenza in un carcere femminile (Violence in a Woman’s Prison) 1982 amongst others. Another curious fact concerning Molteni is that he’s commonly listed as the co-director with Jean Josipovici on Delitto allo spechio (Death on the Fourposter) 1964. Information is sparse on what he did to deserve the credit, as he’s only stated as “ American version directed by” on the rare print available. It’s odd, as he never directed another before or after that one. But back to Crazy Desires of a Murderer, the movie certainly works but there’s a feeling that something’s missing with those quick cuts, coitus interrupts and sloppily edited soundtracks, and you don’t have to look far to find a possible solution to that mystery. 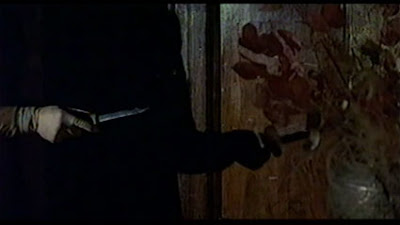 Searching the net for information on the movie, I revisited Johan Melle’s excellent euro fever where he reveals that there was more to the movie and exposes images taken from the considerably much more explicit photo novella of the movie. You should check that out for the whole image of what this movie could have been like. 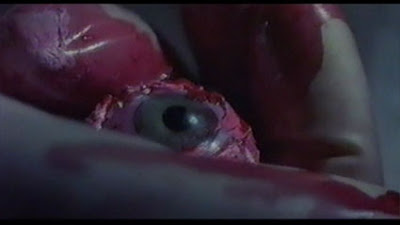 The title of the movie, Crazy Desires of a Murderer, is a decent title, and definitely tap’s into the mood of Gialli names of the period. In many way I’m glad that they decided on something other than a mere translation of the Italian title, as this would have been more of a spoiler perhaps leading the audience to expect a movie more erotically daring than the horror themed violent Gialli… which reminds me again of euro fever’s article and images. Johan will even tell you more about the movies history and reasons for being exorcised into the shape it’s available on bootlegs today. I think it’s time you paid a visit there now.
Try this for a mood reel...
- December 11, 2011

Thanks for the kind words about my blog. Much appreciated!
I really enjoyed your thoughts on the film. This film is far from perfect but you nicely pinpointed why gialli (even lower-tier ones such as this) are so appealing!
I can still remember buying the Redemption tape of this many years ago at a Video Nova store in Oslo that had a great little shelf with horror movie imports. Lots of Redemption and VIPCO stuff there. For someone who was just getting into Euro horror there was a lot to feast your eyes on - even though some of those Redemption covers were really ugly!

Thanks.
I was a big fan of Redemption, and bought more or less everything they put out. Without them I'd probably never had started to seek out gialli in the extent I did.

Only the other day I came to understand that Eileen Daily (the woman who was the Logotype, and featured in much of the early artwork) was a co-founder or the company. I never knew that, and it made me miss those sleeves even more. At least someone put some thought into them, unlike a lot of other stuff that one can find out there. :D

Thanks again Johan, and keep up the always impressing research and writings.
J.