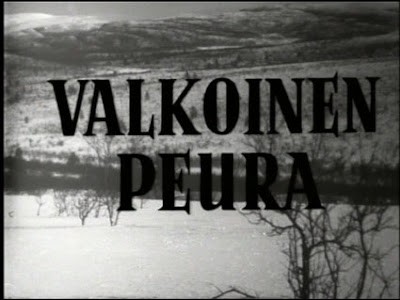 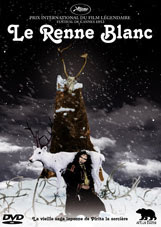 Say the words “Genre movie from Finland” and most people will think of Pete Riski’s Dark Floors 2008, Jalamari Helander’s Rare Exports 2010, or perhaps even Antti-Jussi Annila’s Sauna 2008 but they will probably not mention Erik Blomberg’s 1952 early shocker Valkoinen peura (The White Reindeer). 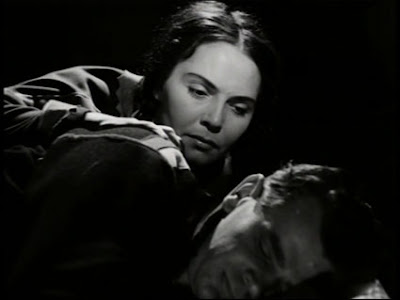 Blomberg was a Finnish documentary filmmaker with background in cinematography. After lensing several feature films and short documentaries – several of them award winning - Blomberg took the step up to directing. Obviously he perfected what he already knew, and co-directed documentary Porojen parissa (With the Reindeer) 1947, a movie which went on to win Blomberg a Jussi Award for best editing together with his co-director and co-editor Eino Mäkinen. Six documentaries later, he made his debut feature with The White Reindeer, a movie that he co-scripted with his wife, actress Mirjami Kuosmanen – who also won a Jussi Award for her performance in The White Reindeer. 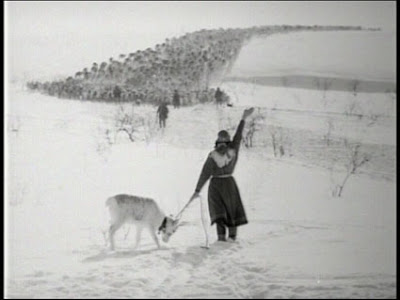 His final movie, Noc poślubna (Wedding Night) 1959, a Finnish, Swedish, Polish co-production based on Émile Zola’s L’attaque du Moulin. Despite an international cast of amongst others Bergman muse Harriett Anderson and Ignacy Golowenski; the movie was a devastating failure. After screening in Poland and Finland, the critics thrashed the movie and Blomberg so profoundly that the movie never opened in Sweden, and Blomberg left movie industry. Looking back at his career, the obvious highlight is winning the international prize at the 1953 Cannes Film Festival with The White Reindeer, a movie I’m taking a closer look at today. 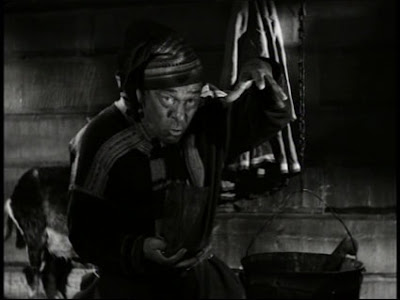 There’s no wasting time in The White Reindeer, as soon as the opening credits are finished, a singing voice comes in and delivers otherwise awkward exposition and more or less establishes the setting, the mythology, the genesis of the curse. Song ends and it’s all fun and games as the Lapps race sleds drawn by reindeers. Pirita [Mirjami Kuosmanen] stands out, as she’s the only woman competing in the race, and she certainly gives the men a run for their money. Although to keep gender roles at bay, Aslak [Kalervo Nissilä] ropes her in and gives her a snog – suggested inoffensively off screen, after all this is still the time of innocence. 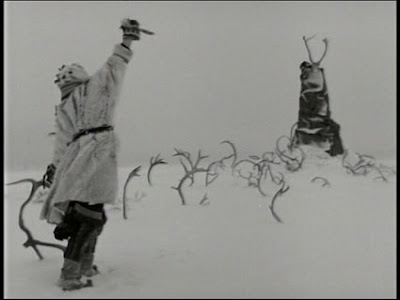 Alsak asks Pirita’s father for her hand in marriage and all seems to be leading towards a happy conclusion for the young couple… but, and there’s always a but… shortly after their wedding night, Aslak has to take the herd off to roam, and leaves Pirita alone at home. Disappointed, Pirita wanders the snowy plains visiting the Shaman Tsalkku-Nilla [Arvo Lehesmaa] to ask for a love charm to be cast, helping her keep Aslak at home. But mid-chant the Shaman pulls back in fear and screams that Pirita is a witch, the spell goes wrong, she becomes cursed instead and the shaman tells her that she will kill/become the first living thing she encounters… which just happens to be a white reindeer. 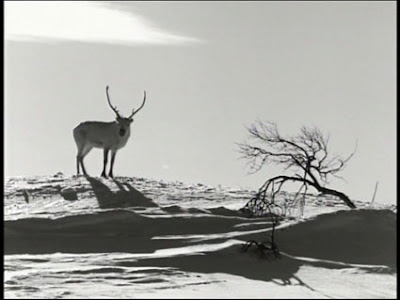 Later that night in the light of the full moon, Pirita turns into a white reindeer, and such a reindeer is a prized trophy amongst the Lapps. Aslak’s mate, Niilo, sees it, chases after it and wrestles it to the ground. As he brings the animal into submission he hears a familiar laughter. The Reindeer has turned back into Pirita, and her lustful gaze seduces him completely. As he moves in for a kiss, we see how Prita sports fangs... The vampire has claimed it’s first of many victims… 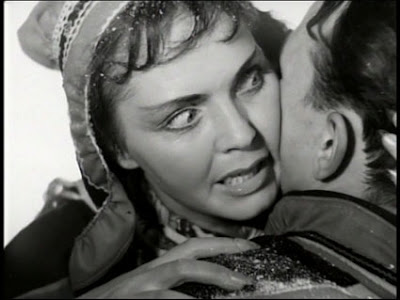 That Blomberg would choose to set his first feature in Lapland, as this is where the majority of the documentaries that he’d worked on where set comes as no surprise. He undoubtedly knows his nature shots, which bring a lot of added production value to the movie. I find myself thinking of oddities like Gunnar Höglund's Kungsleden (My Love and I) 1964, Trier’s AntiChrist 2009 and André Øvredal’s Trolljegaren (Troll Hunter) 2010. Movies which all utilise a lot of nature and location shots to create mood. I have a friend who will remain unnamed, as I’m not sure how official his work on the movie was, but when he was requested to go through Trollhunter and tighten the movie up, it was under the strict order that he was not to trim any of the nature shots. They had to stay at any cost. Never underestimate the importance of your location and the impressions it brings with it. 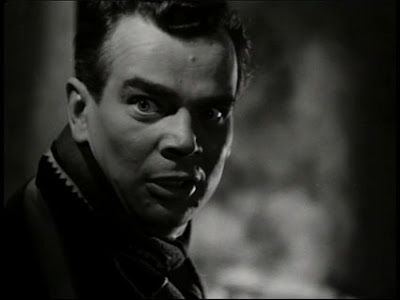 Basically the movie is about greed, obsession and envy. Pirita challenges conventional gender roles, and is therefore punished. She’s punished for wanting more, not being content. For being aggressive, and not the common passive housewife. She captures the alpha male, but then grows weary of his long absence when he’s herding the reindeers. Again challenging gender roles, she takes action instead of being content. She makes that pact with the village shaman to become irresistible for any man, with the intention of luring Aslak back and keeping him there. A pact that goes wrong. It’s also a stern warning, as the desire for more – or perhaps even the at the time provocative “female lust” leads to a certain death. I can’t say that Blomberg intended this, but it’s definitely a way to interpret the movie and what happens in the narrative. After all this is a movie made before female sexuality took control of the Scandinavian cinema screens, and old values where still valid. The movie could also be seen as a metaphor for the fear of the threat from within. Within the family, within the community, with the individual. 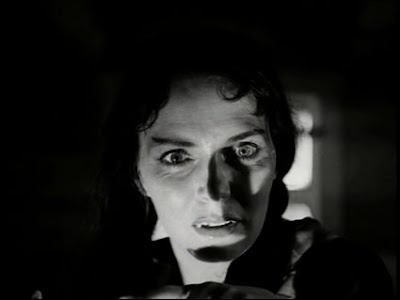 A lot of the tension in The White Reindeer comes from the slow and steady build towards the inevitable hunt the Lapps all engage in. They know that there’s a cursed white reindeer roaming their snowy plains, they know that there’s a witch slaying the men of the village, they know that they have to put an end to the troubles, but they don’t know that Pirita is the vampire witch.
Being something of an old movie, the in-camera effect and editing bring a lot of the in all fairness, cosy, atmosphere to the piece. There’s a lot of old universal vibe here and it’s an enchanting movie that certainly impressed me. God knows, I’ve seen worse stuff that this. The White Reindeer managed to grab my attention and delivered an interesting story. 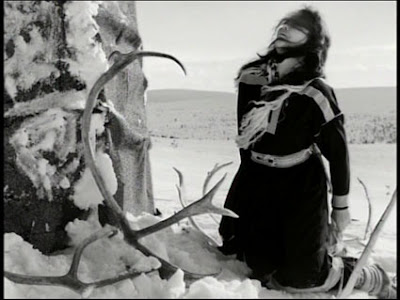 At times the movie manages to come in close to the feeling of the gothic flicks Italians such as Riccardo Freda, Mario Bava and Piero Regnoli would be making in a few years time and to some extent even certain Hammer movies. But this was all before that, it’s most likely that the old Universal and Weimar movies where the largest influence on the imagery and style. Suggestive lighting and cinematography by Blomberg make an ironic statement, as the most impressive moments of the movie all take place on a set – I would have expected the outdoors “documentary” footage to have looked better. In any way, there are moments in the later half of the movie that really stand out and deserve to be re-discovered, this is a lost gem worth seeking out if you want to see what the Finns where doing in the fifties.
- December 14, 2011

I totally missed this review. Very interesting Mr J, need to see this one!