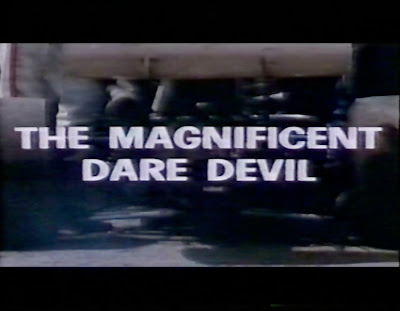 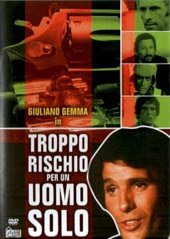 I like the films of Luciano Ercoli. I like the ones that he produced, and even more, the ones he directed. I’ve said it before and I’ll say it again, Ercoli only ever directed some eight movies, and produced almost a dozen, and then mysteriously vanished from the industry, of which you can read more here, but I still consider his petite catalogue of work among my favourites of Italian genre cinema.
Unlike many other of his peers, he wasn’t coming off a background as a newspaper critic and neither did he have any family bonds to the industry. Instead Ercoli was a student of Law and was supposedly to be a lawyer. But finding that he grew bored with the world of academia, Ercoli was lucky enough to get a break from a friend of his who worked in the movies. 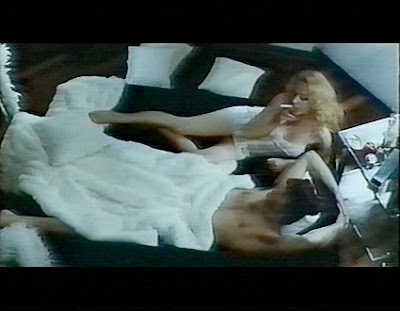 Stepping into the world of cinema as a production assistant on Primo Zeglio’s Capitan Fantasma (Captain Phantom) 1953, Ercoli found his new passion and progressed rapidly from production assistant to assisting the director, to editing and then finally getting behind it all and setting up as a producer. As a producer he made a few movies with Totò (the Italian
comedian who can easiest be compared to Jacques Tati and who also starred in Lucio Fulci’s first future I Ladri (The Thieves) 1959) before moving into the Spaghetti Western genre where he produced three movies for Duccio Tessari (his two Ringo Westerns, both 1965 and the action thriller Kiss Kiss… Bang Bang 1966). After a couple more Westerns it was time due for Ercoli to move out from behind the desk, roll up his sleeves and take on the part of director. 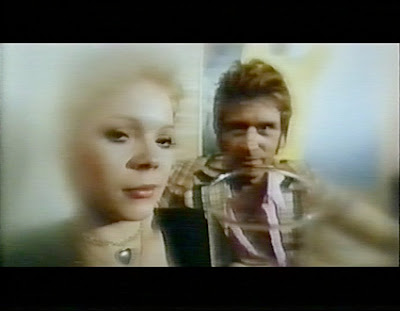 This is where the string of Gialli movies that I enjoy so much starts with the interesting Le foto proibite di una singora per bene (The Forbidden Photos of a Lady Above Suspicion) 1970. For the rest of his eight movie run all his films would in one way or another use the traits and move within the Poliziotteschi and Gialli genre.
The Magnificent Dare Devil was shot between the Giallo La morte accarezza a mezzanotte (Death Walks at Midnight) 1972 and the gothic horror Il figlio della spolta viva (roughly The Son of the Dead is Alive) 1974 under the pseudonym André Colbert, and just like it’ predecessors uses some of the traits belonging to those genres. Starting out with a great sequence at a Formula 1 track in the UK where even great legends like Jackie Stewart and Emerson Fittipaldi are seen, you would think that there’s a chance that it might be movie that will take place in the high-speed world of Formula 1. But enjoy those fast cars as long as you can, because within ten minutes, after a terrific stock footage crash, the movie takes us away from the track and into a devious web of life on the run, as race car superstar Rudy Patti [Guiliano Gemma who starred in several of the movies Ercoli produced, and was Ringo] is framed for a murder he didn't commit. 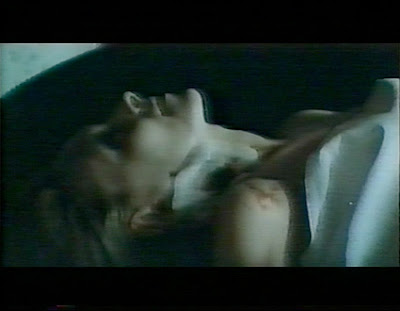 Rudi comes away from the pileup without a scratch and makes plans and celebrates with his best friend and mechanic Piero [Ventantino Ventantini – Antonio Margheritti’s Apocalypse domain (Cannibal Apocalypse) 1980, Lucio Fulci’s Paura nella città dei morti viventi (City of the Living Dead) 1980, and Umberto Lenzi’s Cannibal Ferox 1981]. During the party Rudi gets a phone call from his diplomat girlfriend Nina [Nieves Navarro or here Susan Scott] who he later meets at the airport – watch the matching luggage - and they go back to her place in London for a good old romp. The happy couple pass out from their immense lovemaking and when Rudi wakes up again, there’s a full blown party going on. Uncomfortable with the situation, he tries to leave, but Nina convinces him to stay and have a drink… An unfortunate choice as the drink is laced by a menacing bloke and handed on to Rudi, needless to say e rapidly becomes profoundly intoxicated and leaves the party. Unable to drive his car that he earlier left outside Nina's flat – in a no parking zone – he’s given a ride home by flamboyant homosexual Donald [Giancarlo Zanetti] in his pink VW. With no memory of last night Rudi steps outside to fetch his yellow suitcase from the back of his car, but the car is missing and when he goes up to the nearby police officer to report his car as stolen, he’s nicked and stuffed in the back of a police car… arrested for a murder he has no recollection of committing! 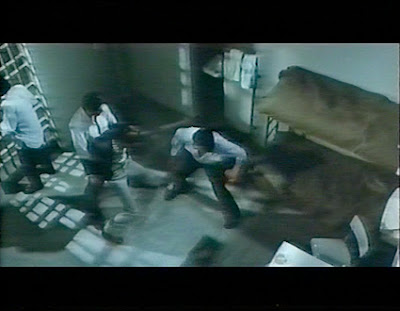 There are several subplots that play throughout the movie, one is the murder and then there’s the missing suitcase. Rudi is the prime suspect for the murder, and all evidence points right at him. At the same time he is convinced that if he only finds his yellow suitcase – the one identical to Nina’s, he can prove his innocence. But as there was an obvious mix up with the suitcases at the airport, there are also two rival organisations searching for the suitcase – as they are certain that it contains a large shipment of heroin – Nina’s been a naughty girl, using her diplomatic immunity for smuggling. So as Rudi – who’s assisted in his dramatic escape from jail by one of the two organisations without knowing which one, it’s all part of yet another subplot – who and why – is not only trying to prove his innocence and stay one step ahead of the police who are searching for him, he also has to stay way ahead of the two rivals that are trying their damndest to lay their hands on him and that missing suit case. 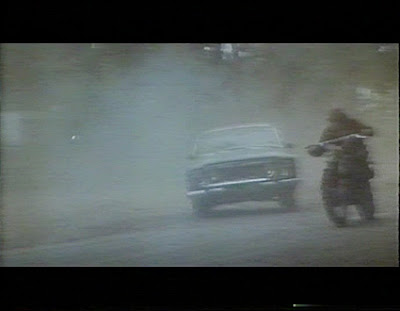 The two fractions, one run by insurance magnate Brauner [Michael Forrest – who dubbed loads of classic Italian pieces, and has for the last fifteen years been doing loads of video game and anime voice work] and Mitridates [Mario Erpichini – from Umberto Lenzi’s Spasmo 1974 and Enzo G. Castellari’s La polizia incrimina la legge assolve (The Marseilles Connection) 1973] are all after Rudi’s suitcase as they want the contents, and he’s stuck in the middle trying to clear his name. 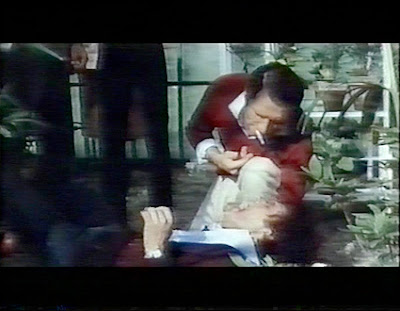 The Magnificent Dare Devil may not be a Gialli or a pure Poliziotteschi even though Inspector Forrest [Carlo Gentil, another Ercoli regular] does his best to play a tough cop, but it does have a script by the great Ernesto Gastaldi who worked with Ercoli on The Forbidden Photos of a Lady Above Suspicion and La morte cammina con I tacchi alti (Death Walks on High Heels) 1971. And that script is a damned fine piece of work. The movie moves fast, has a fair amount of action laden fight sequences, plenty of car chases that ended up entitling stunt co-ordinator Rèmy Julienne with his own credit in the opening titles. Julienne is that legendary stunt man who has worked on everything from Lucio Fulci’s action comedy Operazione San Pietro 1967, Alberto De Martino’s Blazing Magnum 1976 to John Glen’s A View to a Kill 1985 (remember that stunt with the Renault, the one that gets stuck in the tree… that’s him), John Woo’s Once a Thief 1991, and Ron Howard's The Da Vinci Code 2006. 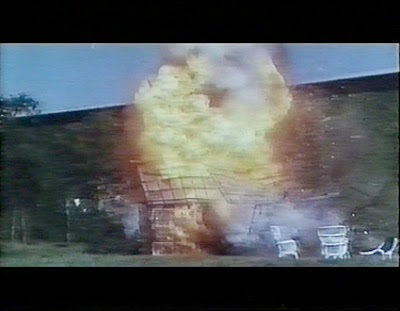 Gastaldi’s script – written together with Ercoli - is pretty logic and nothing really sticks out as a quick fix to move things into a new direction, which some Gialli tend to do. Instead we find an intriguing plot to keep you interested in how Rudi is going to get out of the mess he finds himself treading deeper and deeper into. I mentioned earlier that most of Ercoli’s films use Gialli or Poliziotteschi traits. I choose to see those three Gialli as his learning the ropes and keeping what he liked from them. It’s easy to see Rudi as the amateur detective, the prime suspect attempting to clear his name and catch the real culprits of the piece as he works his way through he narrative. His mate Piero is an obvious comic relief, not that the movie needs it, and you never know until the last moment who the killer really is. 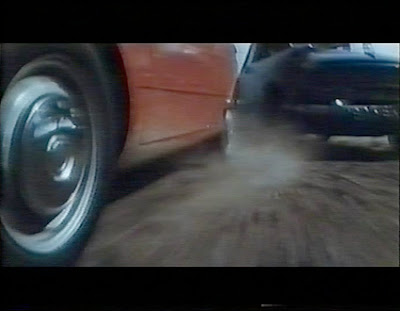 The worst thing with The Magnificent Dare Devil is the soundtrack, as there are really only a few tracks used throughout the entire movie. Giampaolo Chiti only ever scored three movies, and it’s painfully obvious as the same melodies keep returning over and over again. But never the less, The Magnificent Dare Devil is a pleasant little action thriller that get’s the job done, has some suspenseful moments, never feels like a waste of time, packs a good mystery tone, delivers a few good laughs. 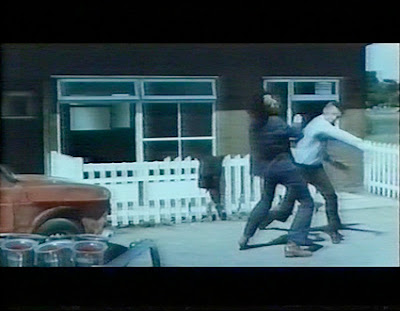