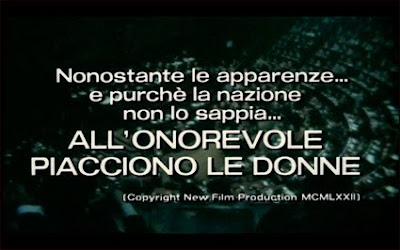 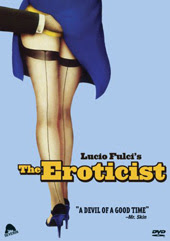 Good old Lucio Fulci, mostly know for those fantastic eighties horror flicks and his early seventies Gialli. Unfortunately those great movies have him pigeonholed as a horror director, and not the skilled craftsman that he actually was. If you haven’t already been there, I’d encourage any fan of the Maestro, to track back-over and watch the stuff he directed in between those two periods of dark features – some, like The Eroticist where directed during the first period, and you will see that these movies are a definitive reminder of just how talented Lucio Fulci really was. 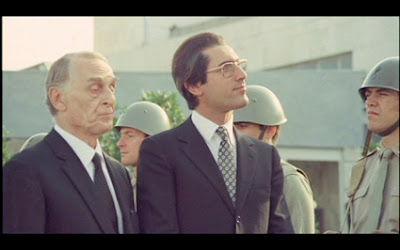 But even if we decide that The Eroticist is a funny and entertaining comedy with some kinky tricks up it’s sleeve, just keep in mind that this is a Lucio Fulci movie and like many other of his features, there will be a certain bitterness lingering in your mouth after watching it. 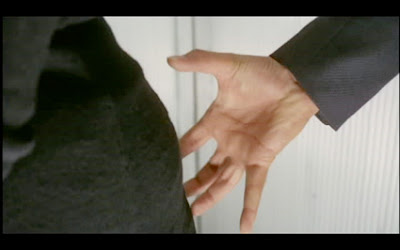 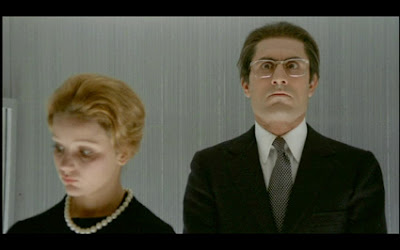 But there’s a problem, as Puppis has a compulsive disorder that unaware forces him to grab women's behinds. A news crew who are balefully watching footage to seek out material to cause scandal and prove that the senator is gay, end up finding him catching a quick grab off the elderly Indian ambassadors bum instead. This sets off a series of events that has Puppis old college buddy Father Lucion [Renzo Palmer] attempt to approach the Senator with the compromising material. Puppis has no recollection of the ass grabbing taking place at all, and because of their old friendship, Lucion offers to get Puppis into a rehab programme to solve his unfortunate problem. The rehab location though couldn’t have been in a worse place - a monastery run by Father Scirer [Francis Blanche] – and there are nuns everywhere to Puppis despair. Amongst them Sister Hildegarde [Laura Antonelli] whom he unconsciously clamps his bottom grabbing hand on, and later will return to play a vital part of the twist ending. 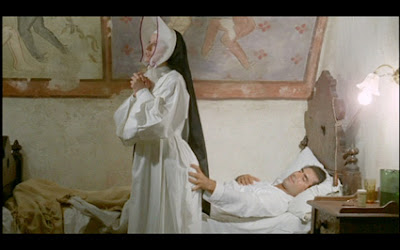 Father Scirer tries to cure the poor senator who’s absence now is major business. With everyone searching for the Senator, Cardinal Maravigli finally sees the footage of Puppis grabbing ass – and as he’s been preparing Puppis, and manipulating him for the role of president since he was a small child – throws a tantrum claiming that Puppis affection for young boys is preferable over the scandalous womanizing. After Puppis tells Father Scrier of his surreal and erotic dreams – which a definitive highlight of the movie and simply outstanding – he feels cured and takes off for official business. But he’s definitely not cured and instead ravages the French Ambassadors wife Anita Strindberg in the bushes during an official ceremony. Strindberg here in her in her Second Lucio Fulci movie, the first being Una lucertola con la pelle di donna (A Lizard in a Woman’s Skin) 1971. - I love that title - Someone really needs to track Strindberg down and interview her about her work in Italian genre cinema – that would be an exclusive. Spinning out of control completely, Cardinal Maravigli steps in to halt the carousel surrounding Puppis, and it’s no laughing matter at all as this man of the clergy comes out in all his wrath and fury sparing no one in his divine mission to put Senator Puppis at the power of the state. 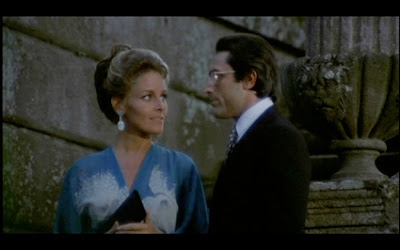 The Eroticist contains an obviously commentary on state and church – themes that Fulci returned to on several occasions in one-way or another. He’d previously used these methods of critique in Operazione St Pietro 1967, somewhat in Beatrice Cenci 1969 and would yet again go after them thematically in Non si sevizia un paperino (Don’t Torture a Duckling) 1972. It's not by chance that it's Father William Thomas [Fabrizio Jovine] who opens the gates to hell in Paura nella città dei morti viventi (City of the Living Dead) 1980. But The Eroticist is the movie that drives these themes the hardest (until Duckling – but that story is for another time) and definitely contains some of his most harsh critique against the church. Fulci had a catholic background, and knew exactly what to plug into to get his point across. 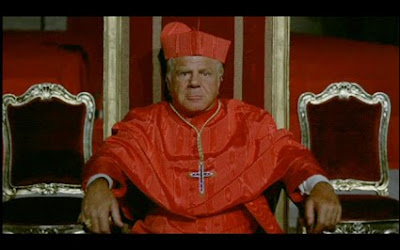 Here’s it’s presented both with complexity as the Church interfering and manipulating national politics, in Cardinal Maravilgli’s atrocities, and also through simple ways as all the priests having pornographic magazines in their desk draws. It’s an age-old complex problem that haunts the Catholic Christians still to this day, and just as Fulci points out, they tend to look lighter on paedophilia than on sexual relations with women. It's that strange Latin relationship that fuels the old Freudian dichotomy the Madonna and the Whore. No wonder the Nunsploitation genre was such a success! 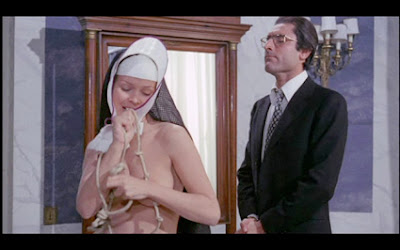 If you know your Fulci, - which I'm sure you all do - you can see that the movie holds his many trade marks and traits that regularly returned to, there’s also a few scenes – mainly the erotic fantasies of Puppis – that are shot in the same floating camera style as the dream sequences of A Lizard in a Woman’s Skin, but this time with Eva Czemery’s as Puppis’ fantasy woman instead of Strindberg. In an amusing way the lustful, happy dream sequences of The Eroticist are polarizations of the dark unpleasant dream sequences of movies to come. And then there’s the darkness of the movies climax, a trait that Lucio Fulci used in many, many of his films.
Remember that this is a comedy, but it still ends on a classic Fulci down note. On that earlier statement of Fulci’s frequent use of downbeat endings and profound cynicism that saps through his body of work, well I hold a theory that this started after his wife passed away – or rather after her depression and suicide after learning of her cancer. That’s heavy shit and it’s definitely going to affect the people in the close family, so I see that as a starting point to Fulci’s exploration of the dark. The movies that predate this event are nowhere near as baleful and gloomy as the work that followed. Probably due to his own depression, and most likely loss of faith in those beliefs he may once have held. Lucio Fulci was exorcising his own personal demons, and mocking the world around him. This is what drove him to become the misogynistic, shaggy malcontent man that we all love and cherish so much. 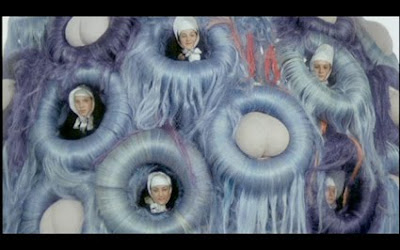 Character wise, comedian Lando Buzzacana gives a great performance, and the constant battle between his Catholicism and his desire for women, a desire that brings him guilt; anguish and self-loathing at times, are hilarious. These character traits make him a much more interesting character than the regular man in office who misuses his stature to feel up young women. And at the same time there’s a risk of Puppis’ compulsive disorders running his career – which is a great value to put at risk, and amusingly it’s constantly a current topic as politicians and celebrities one after the other get caught with their pants down bringing their careers to a grinding halt. Unless you are Berlusconi and can ordain a new law to get you off the hook. 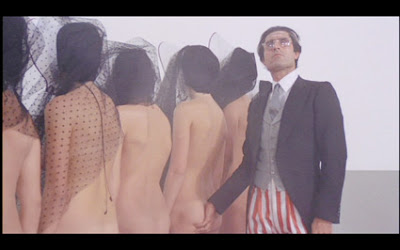 The Eroticist has a neat little plot that is played out through a cheeky and frisky narrative. The script was written by Fulci, Sandro Continenza (Riccardo Freda’s The Iguana with The Tongue of Fire 1971, and Jorge Grau’s Let Sleeping Corpses Lie 1974] and Ottavio Jemma who Fulci previously wrote the screenplay to his debut feature I ladri (The Thieves) 1959. And it is a great movie almost like one of those transplanted hand horror stories, but instead of the hand having its owner commit crimes, Puppis' hand forcefully grabs female bottoms. 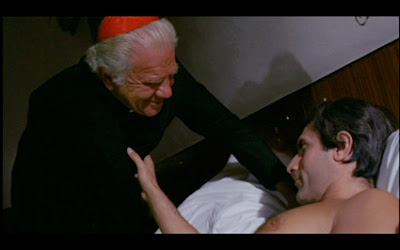 Finally I’ll just point out that The Eroticist also saw the start of a fabulous collaboration, between the great director and his frequent editor, as this was the first movie Vincenzo Tomassi and Lucio Fulci worked on together.
So put aside your blu-ray versions of City of the Living Dead and The New York Ripper, and start tracking backwards to see how this fantastic director evolved from comedic genius to the godfather of gore. 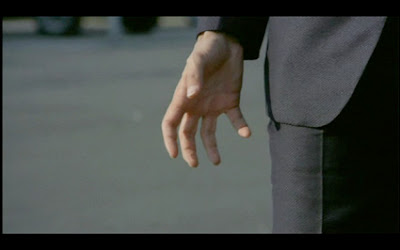 
Extras:
There’s a great documentary - The History of Censorship on the Severin release which sees Lando Buzzacana, Gianetto de Rossi and Cinematographer Sergio D’Offfizi discuss the history of the movie, share some memories and dark secrets and talk of the problems it came upon when it was released.

And today I'll give you a little teaser of the great humour of Lucio Fulci with this clip from the movie. The Senator and Father Lucion on their way to rehab stop at a gas station.

great write up with which I agree wholeheartedly- people- look at Lucio's other stuff, he did more than horror! An excellent and sharp political comedy, incidentally there is a strong political corruption current in La Pretora too- another 70s work of Lucio's I adore. If people take the time to look at fulci from the mid to late 60s to mid 70s they will see his best work- a director on the top of his game.