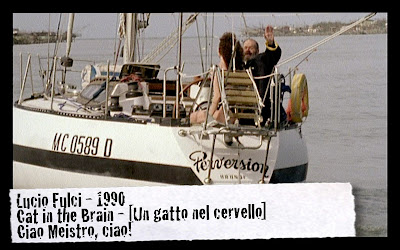 This is scene is omitted from italian prints, which make viewers think Fulci actually lost it in the end...

:) It's a great finale to a great film. The master bidding us farewell. That's partly why I feel that it's his "last" film.

I also remember the scene in the Italian version! Are you sure, Alex?
Great tribute, CiNEZiLLA. The will of the master.

I don't really know which version it's missing from - it's always been in the one's I've seen. But I am sure that there was a version without it, and the movie does end as Alex says with Fulci being insane... Nowhere near the poetry of the fill length version that is.

and thanks, glad you all enjoyed the tribute series. I've been wanting to do it for years.

Perhaps I'll start a Rockin' With Ruggero next or something like that...