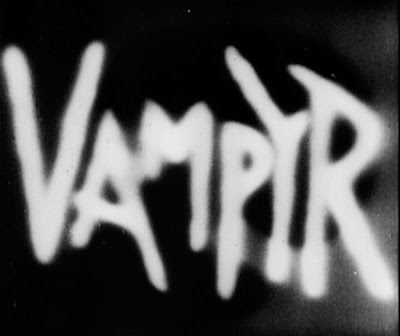 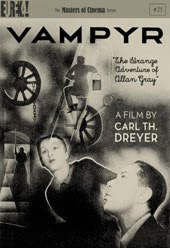 Loosely based on Irish poet J. Sheridan le Fanu’s In a Glass Darkly (the same Fanu who's Carmilla inspired Stoker to pen Dracula) the script for the movie is written by Christen Jul and Dreyer who at the time of production considered vampires to be “fashionable things at the time” – ironically that hasn’t changed in almost eighty years as the vampire as an archetype is possibly stronger today than ever, and is certainly still a fashionable thing. 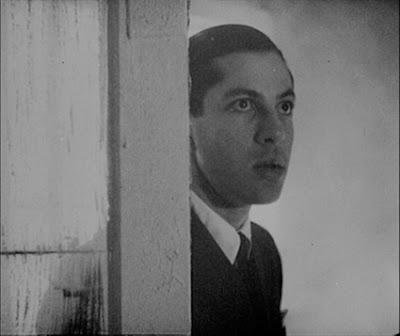 Dreyer’s Vampyr tells the tale of the young Allan Gray [Julian West – actually Baron Nicolas de Gunzberg who financed the movie and wanted to star in it too.], a student of the occult who spends a weekend at a hotel outside Paris which is supposed to be cursed by uncanny beings. During his first night in the strange hotel, an almost transparent character, the lord of the manor [Maurice Schutz], appears in his room, stirring him from his sleep only to deliver the cryptic message ”Don’t let her die!” and then leave a package with Gray only to be opened after his death… 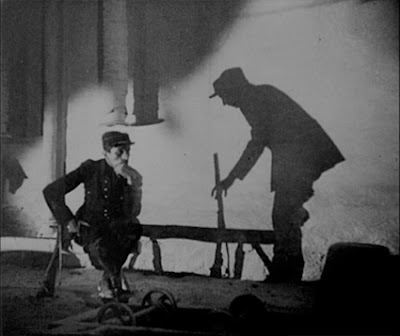 The movie really get’s rocking, in an amazing scene where Gray walks into a seemingly abandoned shed only to see a shadow enter through the window. A shadow reflected off nothing he can see! The shadow leads him up a ladder, which finally rejoins its owner, - Peg Leg [Georges Boidin] - who then walks into a room filled with shadows dancing in a ghostly ball. It’s an amazing scene that really sets the uncanny tone that the movie holds and is a wonder of thirties special effects, the kind of thing that cheesy CGI would have supplied today.
After walking though a forest filled with creepy shadows flying around him, Gray returns to the hotel where he bumps into the village doctor [Jan Hieronimko] who leads Marguerite Chopin [Henriette Gérard] up from the lower region of the mansion. 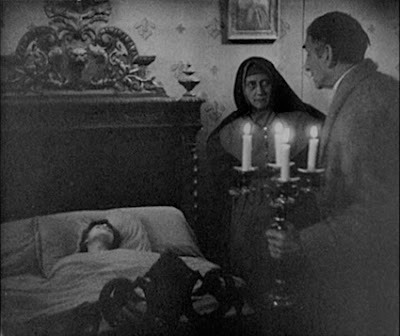 The lord of the mansion tends to his daughter Léone [Sybille Schmitz] – obviously the one he begged Gray not to let die – and as Gray watches them through the window he witness the lord of the manor being shot dead by the shadow of PegLeg that Gray initially saw at that abandoned barn. It’s after the old man’s death that he opens the mysterious package that was left in his room earlier can be opened, a package that turns out to be a book on The Strange Story of Vampires… Needless to say after that book is opened, the vampire themes are set in play – and the film takes on a more surreal and dreamlike tone. 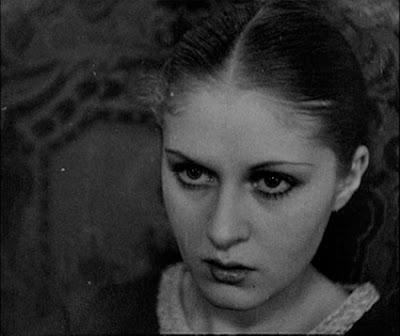 As Gray comforts the deceased Lord of the Manor’s youngest daughter Giséle [Rena Mandel] they hear strange sounds from outside and rush out to find Chopin looming over the ill Léone They bring her back into the house and just past midpoint Léone gives us the first (and only) vampire transformation of the movie; she delivers the line ”If only I could die… But I know that I’m damned” and then her face, though expression only becomes that of someone else. It’s the sort of scene that made Lon Chaney such an icon of horror, the ability to express such strong emotions with small means. 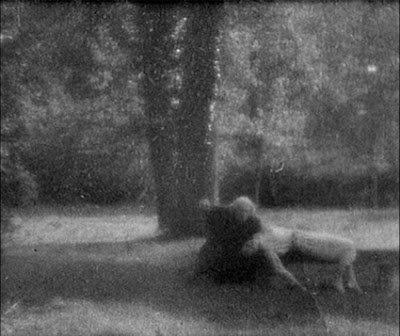 The village doctor turns up again and suggests that Léone needs blood, human blood and Gray steps up to the task giving his blood in an attempt to save Léone – but, and there’s always a but – giving his blood to the doctor Gray becomes a shadow of his former self and as the movie comes towards it’s finale he makes a terrifying discovery n the mansion crypt. 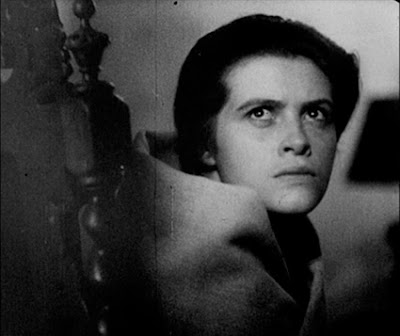 Coming to it’s climax The Doctor, obviously the slave of the Vampire Marguerite kidnaps Giséle and with both women in threat and protagonist Gray lost in between two worlds the late lord’s servant [Albert Bras] finds the book that was left to Gray and uses what he reads there, to bring the film to it’s dark, violent and sinister finale complete with freaky subjective shots, vampiric impalements and deadly asphyxiation. 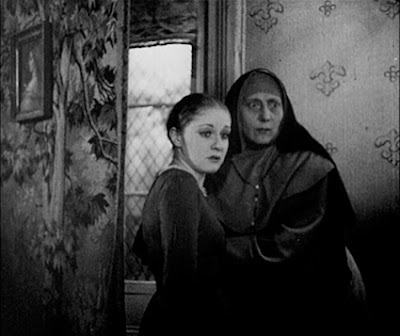 Dreyer is an amazing Danish director who made some great movies back in the day when movies where still searching for a form and language. His 1932 Vampyr is one of my favourite films of early cinema, and the 1928 La passion de Jeanne d’Arc is a splendid tour de force too. After a few unsuccessful movies made in his native Denmark Dreyer moved to France where he hung out with characters like Jean Hugo and Jean Cocteau. Cocteau who I without a doubt see as the largest influence on the surrealistic worlds of Terry Gilliam. In retrospect both La passion de Jeanne d’Arc and Vampyr are considered classics of their time, but back then they bombed at the box office and where considered catastrophic failures. 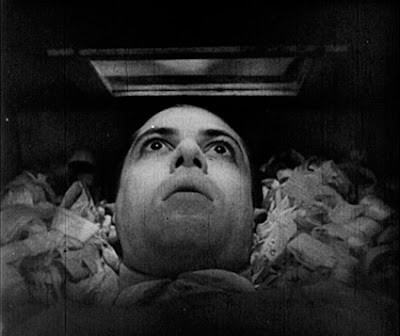 Dreyer didn’t direct another movie until 1943 when his native Denmark was under occupation by the Germans. Setting his movie Vredens Dag (Day of Wrath) in the seventeenth century it deals with themes of hiding fugitives, oppression and paranoia. An apparent metaphor and a gutsy film to make while your county is occupied by the Nazis. One last failure, the drama Två Människor (Two People) became one of Dreyer’s last feature films. Disappointed and distraught he disowned the movie and it was withdrawn from distribution. The movie is commonly considered a lost movie, but there is a print stored in the archive of the Swedish Film Institute. Dreyer only made a few shorts and documentaries after the disaster with Två Människor before ending his career with the success of Gertrud 1964, which won awards at the Venice Film Festival and the Danish Bodil Awards. Possibly this final successful movie was the reason that audiences and critics started going back over and re-discovering the earlier movies of this magnificent Danish director. 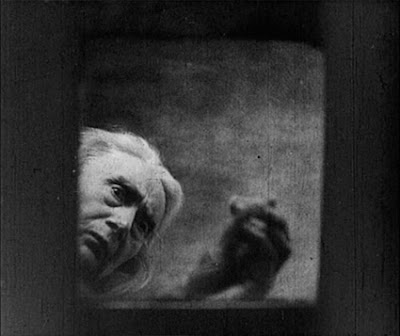 Being the early days of cinema filmmakers could get away with stuff that today would be hounded off the screens as movie makers, just coming into the age of the talkies, they still used the text inserts of the silent era, and this obviously gave them the possibility to add that dimension that is ever so tricky in modern cinema – the insight into the protagonists thoughts. Several times – well four - the text inserts tell us exactly what Allan is thinking and how he feels, hence driving the narrative forward, and gives explanations to what Allan will do next. This also goes for the book that Gray receives, which replaces the text cards– it let’s us into the world of the vampires and establishes the rules that are at play, it delivers exposition that we need to follow the mythos as it unfolds. This is yet another thing that you won’t see in a vampire flick these days, or at least shouldn’t unless it’s a really poor storyteller responsible, as today we know all there is to know about vampire mythos, but in 1932, the rules needed to be set firmly to allow the audience to follow the narrative.
Also the sparse use of dialogue and title cards was a smart way that Dreyer worked around the demands that that the movie was to be recorded in three different languages English, German and French – which had the actors say their lines in each language and with intent to later be dubbed in post - although the English version is said to have never been completed. 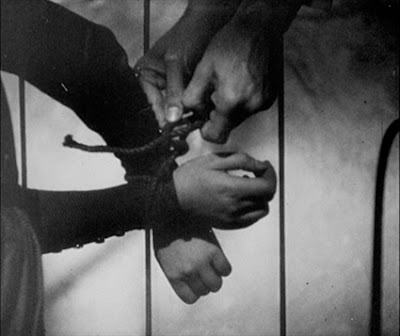 The movie contains some amazing trick photography and great sets by cinematographer Rudolph Maté (who previously worked with Dreyer on La passion de Jeanne d’Arc and would later go on to shoot classics like Hitchcock’s Foreign Correspondent 1940 and Charles Vidor’s Gilda 1946– and superb art director Hermann Warm – there’s footage used in reverse, that superb shadow/ghost ballroom scene and the many plays with light that give great effect, pans forward and reverse track shots and a for the time rather hard editing, cut-a-way’s and no fade over transitions that where common in the American movies of the horror genre at the time – all of these great techniques build an extreme eerie atmosphere which is where the power of the movie lies.
Considering that this movie was made some eighty years ago, and what can be done digitally these days, the movie is an extremely impressive piece of art that mixes surrealism of Buñuel and Cocteau with German expressionism of Lang and Murnau in a gothic setting. I adore this movie and not having seen it since the late eighties when redemption had released it on VHS I was just as flabbergasted re-watching it now as I was back then. 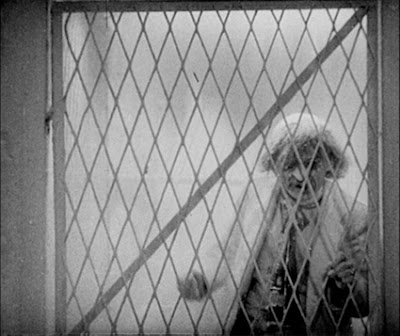 Where Joan of Arc is filled with spiritually, Vampyr is swamped with death, there are skulls everywhere in each and every shape, and moves in the darker areas both visually and thematically and I’ll easily claim that this fantastic movie is possibly even more important than the wave of Universal Horror’s that shot out of Hollywood at the same time. Perhaps it’s my passion for Euro horror that makes me feel that way but considering how important movies like F.W. Murnau’s Nosferatu 1922, Fritz Lang’s Metropolis 1927, Robert Weine’s The Cabinet of Dr. Cagliari 1920 and Benjamin Christiansen’s Häxan 1922 where for the horror genre on film, Carl Theodor Dreyer’s stunning and fantastic Vampyr is indeed a valuable part of every fan of euro horrors education. So if you still haven’t seen it, make sure to pick it up right now. I guarantee that you will have an entertaining time watching it. 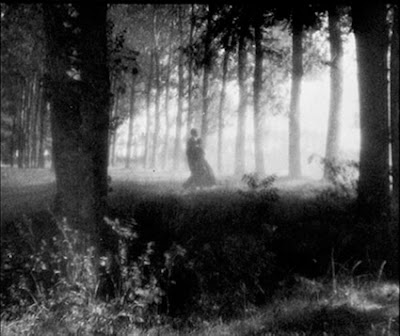 Image:
1.19:1 Original Aspect Ratio
Audio:
Dolby Digital Mono. German dialogue, with optional English Subtitles. There’s also he choice of listening to the Restore or original soundtrack.
Extras:
The Masters of Cinema release comes with an 80 page book with rare production stills, essays, posters and the 1932 Danish film programme. Two deleted scenes that the German censors demanded be removed in 1932. The Baron – a MoC documentary about Baron Nicolas de Gunzburg, a documentary on Dreyer, and a visual essay by scholar Caspar Tybjerg on what influenced Dreyer to make Vampyr. Then there are the two outstanding audio commentaries that accompany the restored print. One with film scholar Tony Rayns and one with the fantastic director Guillermo del Toro that both make it worth picking up the disc just to hear them talk about this fascinating piece of film.
Here's a short clip that shows you that fantastic shadowplay in action
Note: The above clip is not from the MoH disc which looks much better that this.
- April 08, 2010