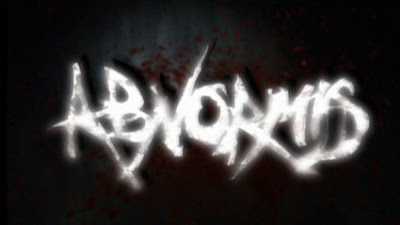 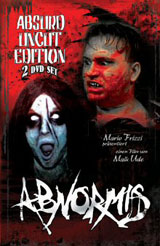 Ok, so I’ve had Maik Ude’s Abnormis safely stashed away in my pile of trash to watch at a better time since I picked it up from the man himself at the Bottrop Weekend of Horrors 2011. Along with the dedicated, signed two disc Absurd Uncut Version, (as every German release, restricted to a limited number of issues, this one 333, the other 333 with alternative cover art) I received a lighter and a t-shirt and that’s about as far as I got before my mates started hassling me for my lack of judgement and poor taste in films… oh the suffering. 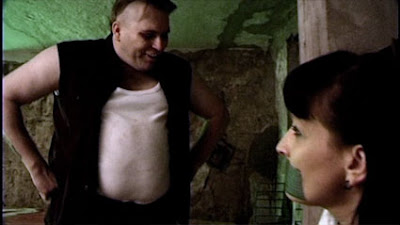 Eva [Andrea Mohr] is pregnant with Chris’ [Darkun] child, but after spotting him being unfaithful with her best friend Kathrin [Divina Buran], she rushes to her car and drives out of the town at a high speed. Chris follows her in his car to give some lame excuse and try to patch things together, or at least explain himself. But, before he can catch up with Eva’s car, she’s stopped by a maniac [Sven Spannagel], the obligatory overweight semi-retard who lives out in the woods and just happens to slaughter everyone who comes along, who kidnaps her and takes her to his damp dark underground torture chamber. So you can check that one off the list of required niche traits too. Blissfully unaware, Chris turns up, knocks on the door, is yanked into the dark damp torture chamber by The Killer and the young couple’s suffering get’s under way. Back in civilization Kathrin, now missing friends, contacts private eye, Marc Blaschke [Marco Kruse] to help her find them. With the assistance of Marc, and two uninvited thugs who Marc owes large amounts of money on their tail, the bunch travel right to the mansion where not only The Killer awaits, but also a mysterious Demon with a grudge against mankind… 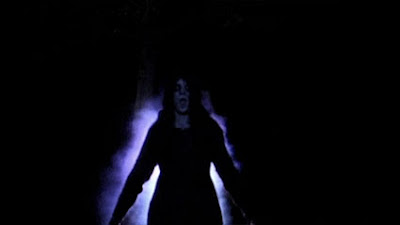 Basically Abnormis is a classic schoolbook example of German splatter. Cheap, gritty and to the point, in a catch them and kill them kind of way. Catch them and kill them, with that dark comedic approach which only the German Splatter niche can deliver. Andrea Mohr at times gives the impression of being bored out of her mind, instead of being scared of dying, and there’s plenty of dialogue where the word “Schlampe” is used, giving it a quirky tone. Not intentionally, but “Schlampe” was the main gag my mates and I returned to all the time after watching Violent Shit back in the day. But there’s also that dark German nihilism, which I’ve in earlier texts pointed out, is a vital ingredient in German splatter flicks. 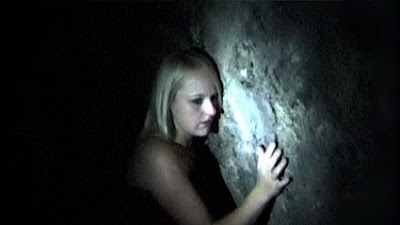 It would be too easy to trash the fuck out of cheap low-budget horror films, especially amateur made horror films if I was to take the easy way out. Instead, I like challenging myself to find the positive within the movie, tap into the filmmakers enthusiasm and get a feel for what they where trying to do. Again, it would be way to easy to crush a film like this, and that’s why every amateur film critic tends to trash above praising. To be honest, I wasn’t expecting much from Abnormis, I though it would be cheesy, have dodgy effects, suffer from bad pacing and poor acting… and you know what it is rather cheesy, has dodgy effects, suffers from bad pacing and is pretty much filled with actors who couldn’t act their way out of a paper bag, but that’s also part of the game: It’s amateur horror, this is where you find the crazy shit, see how creative devotees make do with what they have and this is where enthusiasm takes first seat. Complaining about these things would be like watching amateur porn and complaining about sock marks, pale skin, bad lighting and drunk overweight wannabe actors who couldn’t stop looking into the camera. 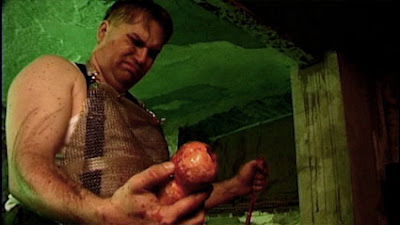 Cannibalism, sodomy, chunky murderers, foetus yanking, well fed chicks getting naked and screaming demons all come with the unique German Niche, but what I wasn’t prepared for, was that the movie would surprised me with small, but effective beats, where I have to give credit to Ude as they result in some pretty interesting twists and turns.

The tension of setting a pregnant woman – in her vulnerable state – in the hands of a sadistic maniac is great. It undoubtedly builds up an extreme tension that you know will only end in one way. But this is where the beauty of German Nihilism and Dark Comedy come to a splendid combination – After her harrowing ordeal Eva starts to give Chris a bollocking for being such a weak man! Yeah, she compares him and his unfaithfulness to the violence of the maniac, “One broke my Heart, one broke my Baby!" and then swears that she’ll have her revenge. Oh the passion of dark German splatter, it’s a beauty isn’t it. 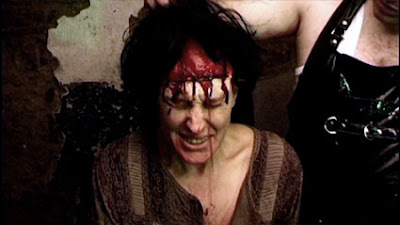 As you may have guessed, Eva’s revenge does come in all it’s glory when she’s comes back to haunt all who enter the mansion as the Demon, that great iconic image printed on t-shirts and DVD covers. The Demon, second only to the chubby carnage bringer, is the most featured antagonist in German splatter flicks. Hell hath no fury as a mutilated woman who’s had her baby yanked out of her womb! In some fucked up way, Eva becomes the character we empathise with, and her vengeance is ours too. Oh, and that’s when the Swat team arrive to search the house… Told you, this is where the crazy shit happens.

I really like the private eye subplot. It’s not only a way for Maik to cast himself in a small part, but also a pretty smart way to increase the number of victims at the mansion, up the body count and get some more gore effects in there. God knows we’ve all seen professional movies where people pop up out of nowhere just to be offed in the next scene. At least Ude builds some kind of credibility for his victims. 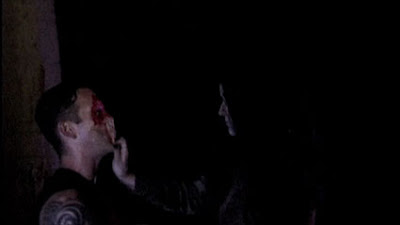 A favourite moment is when Tito the thug [Boris Klemkow] pulls his gun on Marc and shouts that he’s going to kill him for pulling him into this “shit” (read nightmare). Marc coldly screams back "Go on then, shoot me, that will leave you all alone out here with this maniac!”

Forty minutes into the piece the “iconic” Abnormis face of the Demon is presented, and from here on the movie really takes off, bringing an investigation plot into play, but also moving from splatter and gore into a more supernatural realm too. There’s a bit of everything in here and the last ten minutes really venture into nightmarish bad trip territory, bringing the movie full circle.

I dig that Ude goes with full coverage horror and not the usual insulting “oh shit no coverage my cell phone is completely useless here” gimmick, instead, he goes all in, Chris send’s text messages to Kathrin, and even sends her an MMS from the torture dungeon.

Finally I do kind of like the score and black metal songs that Darkun and his band The Dark Unspoken  (as well as Territion) have supplied for the movie, it sure beats the usual cheap synthesiser drone and plastic orchestral tripe that comes with German Splatter films.

So yeah, Abnormis is all about cheap gore, has some fun twists, and an amateur enthusiasm that really makes this a film I enjoyed. I’d easily take a look at whatever Ude comes up with next. 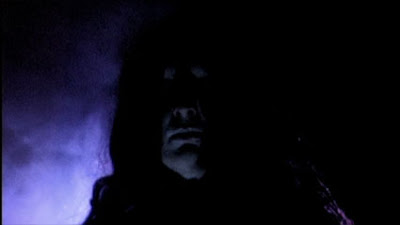 Just for the record, I love my Abnormis t-shirt with Andrea Mohr’s demonic face screen-printed on it. It looks like a black metal shirt and I always get asked about it when I wear it. It’s one of my favourite t-shirts, and I’ll happily promote Ude’s film by wearing it, as that’s what drew me to their sales desk at the horror fair to start with. See, no matter whom you are, an impressive promotional image goes a long way.

Cheer's Jackster. I'm sure you can find it in any good german dvd shoppe.