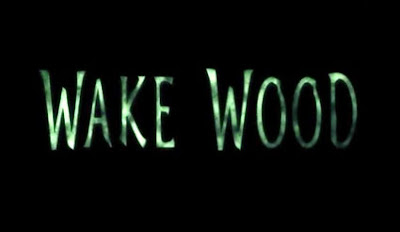 A middle-aged couple that tragically lost their young daughter Alice [Ella Connolly] in a freak accident, have relocated themselves to the rural village Wake Wood. Patrick [Aidan Gillen] works as a country vet, and Louise [Eva Birthistle] runs the village chemists. Their relationship has grown cold and they are further away from each other than they have ever been. Although Patrick refuses to let go, Louise mournful state has shattered any chance of their relationship to go further. One night, after Louise has declared that she’s leaving Patrick, their car breaks down in the middle of the woods. The couple walk over to Arthur’s [Timothy Spall] farm to ask for some help, but instead Louise witnesses a strange ritual where a recently deceased man comes back from the dead. When confronted by Arthur, about the ritual they saw, he offers them the chance to have their daughter back. An offer they emotionally can’t refuse… 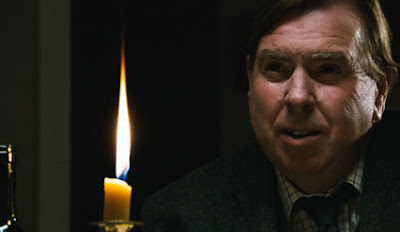 It’s the resurrected HAMMER, you don’t need more reasons to watch this… Honestly, you don’t! Looking at the series of movies that have come out of the resurrected studio this one – apart from the obvious James Watkins The Woman in Black 2012, which I still have to see – Wake Wood really taps into the grand old Hammer tradition of paganism, old school wiccan rituals and the dark forces of the occult. 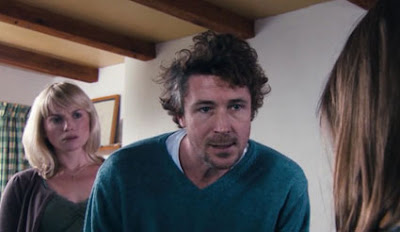 There are a lot of really smart things going on here. First off, anything with a kid in peril, or a threat to a kid, won’t get to me, but as soon as you have parents going about their everyday lives and their kid being a victim of force majeure, then you grab me by the throat. I can watch monsters and unworldly stuff attack children but when it’s the stuff that I can relate to and worry about in the real world, then it gets to me. Hence, Wake Wood grabbing me firmly in its manipulative grasp when the opening titles over Patrick and Louise’s move to Wake Wood are crosscut with the backstory of how they lost Alice. It’s a deliberate and brilliant move as I totally empathise with them when they get that offer to “see her again!” I know that I’d jump at an opportunity like that in an instance if it were one of my kids.

The story kind of plays along classic ground, somewhat Stephen King’s Pet Cemetery and Robin Hardy’s Wickerman in tone, which set’s a great anticipation as we all know what happens when humans try to play god – shit hit’s the fan and it all goes to hell! There’s always a price to pay and now it’s just a build up to revealing what and who has to pay. 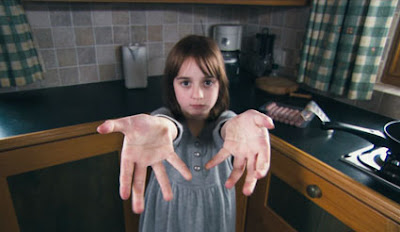 I’m a sucker for a stern set of rules, and Wake Wood has rules to hit the spot: She can only return for three days, you must not travel outside village boundaries with her during these three days, you will be bound to Wakewood for the rest of your lives and the most important: death must have been less than a year ago.

There’s a great build of curiosity when one of the ritual performers and village elders’ starts questioning the bringing back of Alice as she has a sensation that something’s wrong. This combined with the fact that we keep getting hint’s that Patrick and Louise are keeping something from Arthur, and the audience, also adds to that ever-growing bud of curiosity. Along with our familiarity with genre, and the prediction of trouble at bay, this all adds to elevating the movie to a very tense and engaging narrative. After all, the questions it poses are, at least for parents, pretty heavy ones. Movies like this all use the emotional recognition that the audience feels with the main characters to work their way under our skin, and at times into our heads. What would you do if you where given the chance to bring back a loved one for three days? 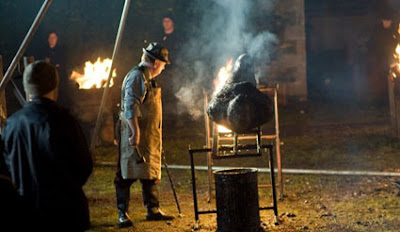 Obviously there’s a lie at the bottom of the barrel, and when mankind tries to pull a fast one on the old gods, they have to pay. Alice is not the same soft, gentle child she once was, and now it’s up to the people that brought her back to also put her back in the ground. Again, a hard and devastating punishment, but in a harsh way fair, after all you can’t unleash an animal mutilating, villager slaughtering little runt out on the countryside without taking your responsibility now can you!

A suggestive ending gives a great climax which will leave you with a uneasy smile on your face. You know where it's going to go, but Keating leaves the imagery up to the viewer, which definitely is much more effective than anything else that could have been put on screen. I really like endings that send you off with an uncomfortable feeling in your gut over the closed case all is fine again endings. This way the movie lives on in our head after the credits have played.

It’s also a delight to see my old mate Magnus Paulson as co-producer (and Film i Skåne) being part of this film as this only makes me like it even more. Go Sweden, and thank you for being part of a great movie! This just goes to show that we need to stop all these tedious, repetitive Police-Action-Bullshit flicks that drown the audiences here and get working with the one thing we really utilize the best, human angst. Mix that up with some good old school horror and we’ll be onto something. 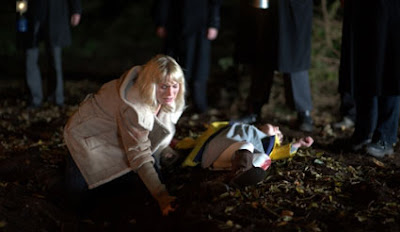 Wake Wood get’s a 5 out of 6 because this was a good and solid movie. Moving, disturbing, emotional, creepy and perhaps most important, a damned fine horror flick with believable characters, creepy villagers, pagan rituals, and some great gore effects. I may have missed the hell out of Hammer movies, but now I’m thriving on their return, and actually find the assortment of genre pieces they have released in the few years back on the scene, to be stern proof that they are serous players who, just like the icon who built the house of hammer, have undoubtedly risen from the dead.