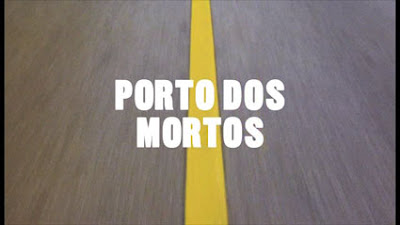 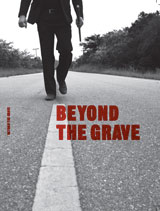 Brazilian horror! You don’t see too much of that these days, do you? Perhaps a Coffin Joe movie here or there, or possibly Tiago Belotti’s A Capitol dos Mortos 2008, but the titles are few and far apart – at least in this part of the world...  Well now you can add Davi de Oliveira Pinheiro’s Porto dos Mortos (Beyond the Grave) 2010 to the small, but slowly increasing number of genre titles from Brazil. Low budget, independent, intriguing… Beyond the Grave may come out of an underdog corner, but it still manages to pack a pretty fascinating sting. 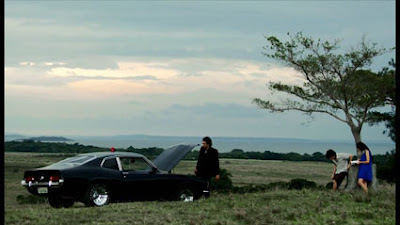 The basic set up would be something along these lines: In a world overrun by the living dead, known here as Returners, a Police Officer [Rafael Tombini] is on the hunt for the serial killer known as The Dark Rider. His quest takes him on a road trip through the country, and sees him teaming up with several groupings of people he encounters along the way.

The initial part of the movie is used to establish the Police Officer’s quest. To put his character on the map, giving us the reason why we should give a damn about his task at hand. After an initial shootout to establish genre traits, Officer is confronted by a sword swinging Asian and seems to be facing a certain death. But by chance he survives the attack and rises to come out victorious from the fight. This says three things about Officer. He’s not invincible; he’s mortal as you and me as he could pay for his quest with his life. At times the gods smile upon him and give him a free pass to get out of seemingly impossible situations. The last one is that he’s a man of action, fully intent on succeeding with his task, at whatever cost. 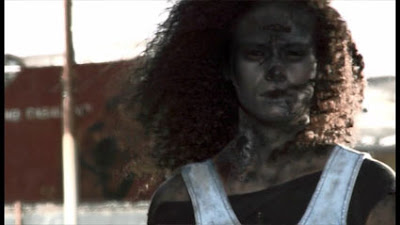 After the opening credits we see Officer confront two kids apparently breaking into a store. Officer questions them, and we come to the insight that Officer is a man of morale ground. This is also where the antagonists of the piece are introduced – the living dead, or that’s at least what we think so far. Within this first group of companions we find the mute girl. A character I found to be one of the most fascinating in the whole movie. She carries a typewriter along with her, writes notes for her young friend, and being mute she has to play out a zombie stomp to explain to Officer that there are living dead in the area. I would have enjoyed seeing more of this character. 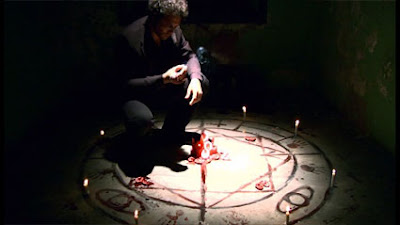 This is where something interesting happens. The ordinary world has been established – a world where the living must fight the undead for survival. Despite the many warm sunny images, it’s a dark and dystopian world. When this is established, Pinheiro explains the quest at hand - The Officer’s pursuit of serial killer The Dark Rider. An interesting move, as this brings something else to the movie. 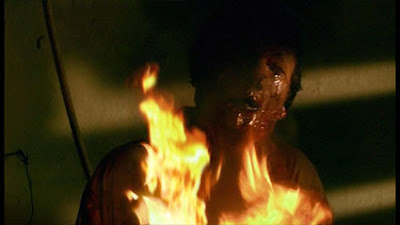 The Dark Rider has been eluding him since before the “dead started to walk”, and Pinheiro brings a interesting twist to the story when it turns out that the undead, or returners as they are called here, are drawn to the Dark Rider.  Naturally the Dark Rider ‘s co-horts are meaner and grimmer the nearer the Officer get’s to finding him, and encounters become more sadistic and violent for each step closer, sometimes taking a shocking toll on the constellations the officer find himself part of. 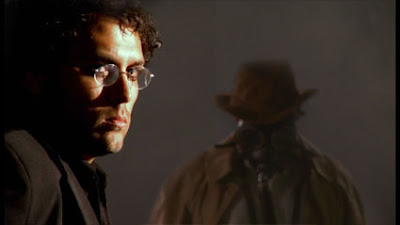 I dig when movies stop and take a turn outside of the usual convention. Beyond the Grave does so by revealing the backstory of Officer and the Dark Rider at the midpoint of the movie. Exactly when we need to know more about The Dark Rider and the mysticism that surrounds his character. The Dark Rider has the powers to change his appearance when his life form is taken, and move to a new body of choice. The Dark Rider is much more than The Officer bargained for.

I don’t necessary demand fast paced, wham-bam, gun’s a blazin’, gut’s a spillin’ action in my horror. At times a more meditative approach can be the exact right thing. It’s almost like watching an Alex Cox flick, that slow moving but simultaneously underlying unease that one finds in his movie. Sometimes it could be the delicate build up of Sergio Leone or the winding mysticism of Richard Stanley – I’m sure Davi de Oliveira Pinheiro is paying homage to his heroes as certain images and visuals are definitely referring to those directors and their characters. I also get a strong The Walking Dead vibe from the movie as Officer shifts and changes friends and foes along the way, putting morale and loyalty to question. The old “don’t trust anyone” paranoia of the Zombie genre is evident. 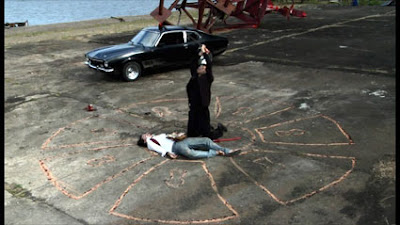 The plot is an noteworthy approach – take the Searchers, mix it with the aesthetics of Spaghetti Westerns, the lack of destination found in the really good Road Movies, fuse it with vigilante tough guy movies and place it all in a horror setting. Using the Investigation plot makes for an interesting drive forth in the narrative. Ok, it takes a while before I’m actually on the train, but when I know what Officer is after, then I’m along for the ride, and it is an intriguing ride. 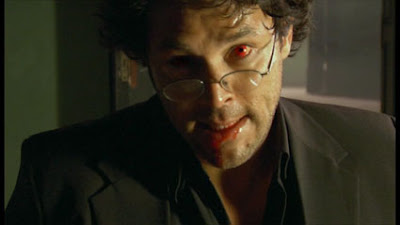 There are a lot of things I really like with Beyond the Grave, especially the suggestive ending, which offers a deeper perspective to the movie than I think a lot of genre fans will give it... I love mind fucks, and Beyond the Grave ends with one. For a low budget indie horror it has some wonderfully composed and great looking shots, at times it has spot on editing and a noteworthy narrative that builds off an investigation plot. Yeah, I find Beyond the Grave to be something more than the common horror/thriller flick, it seeks ground further beyond the classic conventions. Despite using several familiar plot devices and narrative traits, Beyond the Grave manages to stick the odd twist and spin on the genre and convention as well. Davi de Oliveira Pinheiro has come up with a movie that manages to hit marks and beats that others out there don’t. Beyond the Grave is an impressive, original and cautious movie that deserves your attention. After all, innovative horror from Brazil may rise once again.

This looks awesome! Were did you find it?

I was asked if I'd like to watch it, and I did and I liked it.

I sure if you look around the net for Lockheart Filmes you will be able to find them.