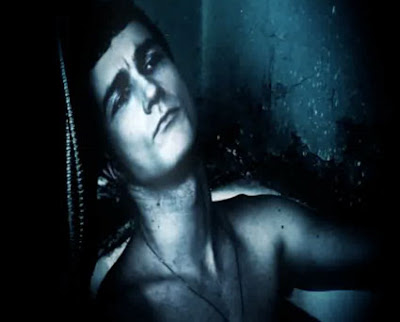 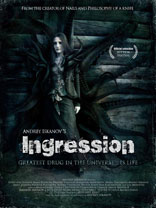 There’s a lot of pain in the films of Andrey Iskanov, mental suffering, torment of the psyche and torturous frustration. Iskanov constantly returns to these themes film after film, like an explorer of human distress. But he does it in his own unique way, as he blends horror themes, surrealistic imagery, violent bursts of juxtaposition and clashing contrasts laced with layers of eclectic editing. 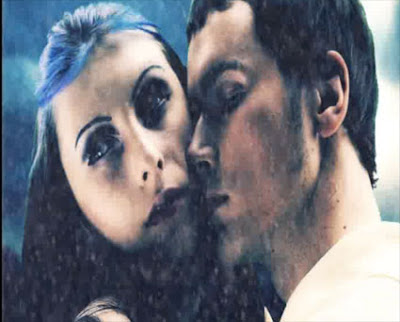 Andrey Iskanov's Ingression (formerly known as The Tourist) sees the final bookend of the HalluCinoGeNnN trilogy made up by Gvozdi (Nails) 2003 and Visions of Suffering 2006. They do not share a chronological narrative, but more so themes and visual/audio style. They are movies that deal with strong topics, and are filled with strong imagery. It’s no understatement that this trilogy of films is challenging and demand a lot from their audiences. Where many would display their special effects and violence up front, Iskanov hides it under ferocious distortion, intense editing and walls of provocative audio. Iskanov’s films leave their audience drained and exhausted. 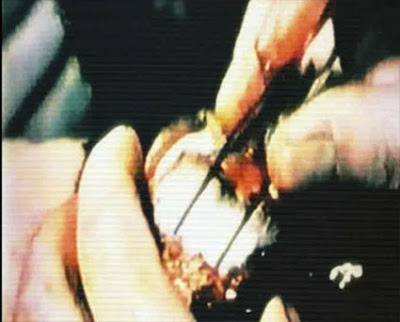 A few days ago, Iskanov granted me the interview we have been talking about conducting for quite some time now, and we ended up talking for a massive four hours about his films, storytelling, the unique style of his films and how people receive them. Without hesitation I can say that my respect for Iskanov’s films, craftsmanship and working situation grows deeper for each time I speak with him and unearth more insight into his philosophy, aesthetics and obstacles in the way of his film making. 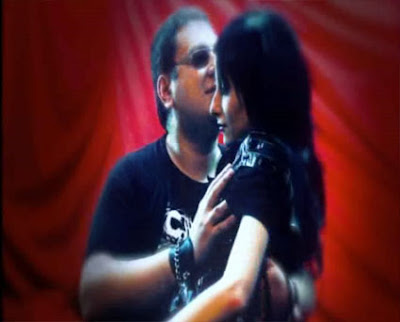 Fans who might have caught Ingression at the B-Movie, Underground and Trash Filmfestival in Breda, Netherlands, or the HÕFF in Estonia a few years ago, will be interested to learn that Iskanov has gone back into the movie and reshot most of the first act. This forced him to reshoot all scenes of featuring his leading lady, as she wasn’t available for reshoots. After the festival cut, with a impressive running time of 159 minutes, there was also some controversy surrounding scenes of violence aimed at a child. Something Iskanov decided to remove after harsh critique from fans and industry.

“This was before Serbian Film was released; realistic violence and murder against kids was not completely accepted or understood by fans. Members on horror forums wrote some really bad reviews, and I got a lot of angry mails. Even some of the actors started complaining and wanted me to take their names from the credits. Distributors once again commented that the film was too long and that people cant didn’t have the patience with movies that long. (As a referent to the four and a half hour long Philosophy of a Knife),   so I removed the original ending and shortened the film to around 100 or 110 minutes.” 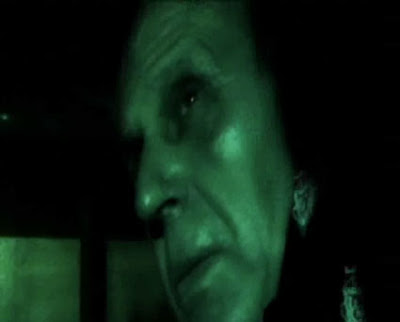 Taking place in an utopian future on the brink of political chaos, Alex [Iskanov regular Svyatoslav Iliyasov] is on the brink of self-destruction. His wife Lucy [Voiced by Manoush, who also did voice work for Iskanov on Philosophy of a Knife 2008 and starred in Marc Rohnstock’s Necronos: Tower of Doom 2010] has walked out on him and moved in with his neighbour Victor [played by Iskanov himself]. Alex turns to drugs to ease his pain, and perhaps help him over the edge and into realm of indifference. Facing the legendary underground drug dealer known as The Alchemist [another Iskanov regular Victor Silkin], Alex is offered a new drug, unlike any known to man. 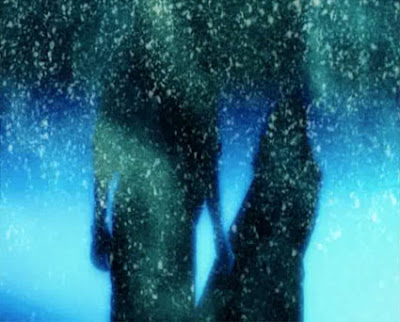 Alex takes the drug, called Tourist, which puts him in a trancelike state inducing hallucinations of amongst other things, being chased by a band of knife wielding assassins – a highly impressive segment of the film that comes to a hideously violent climax. In his drugged state he connects with other dimensions, and comes upon a seductive woman in black who lures him into a sinister plot to assassinate The Alchemist. It becomes an agenda that takes Alex on a deadly detour from his original plan and into something completely different... 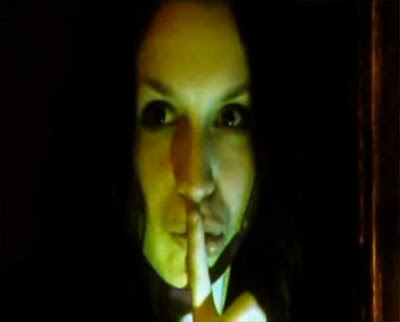 No plan is complete with out it’s twists and turns, and Iskanov takes us down a complex road before setting Alex and The Alchemist face to face where fate changing questions are posed. The narrative rushes forth, blending action and horror with moments of extreme violence.. and just wait until you see the absolutely fantastic Lovecraftian tentacle moment? 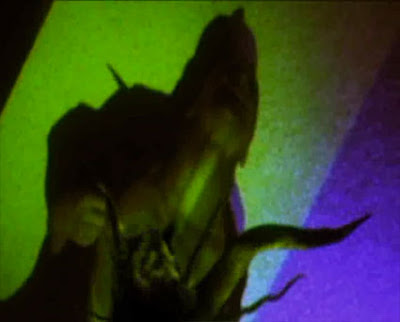 Iskanov told me that this magnificent scene is homage to the tentacle monsters he loved as a child. H.G. Welles War of the Worlds, The Kindred and Xtro. But whatever impression the scene made on me, Iskanov promises that I haven’t’ seen anything yet, as he’s just even spent the last six months creating a new monster reshot this scene.

“The creature was all done in old school fashion. Reverse photography and fishing lines. There were batteries and diodes in the head for the red eyes of the creature.   But I’ve created a remixed creature scene where I constructed a new creature. This one glows in the dark like a deep-sea fish. This one was much harder work than it was in first time. I also used few assistants and also ultraviolet lighting to make it work.” 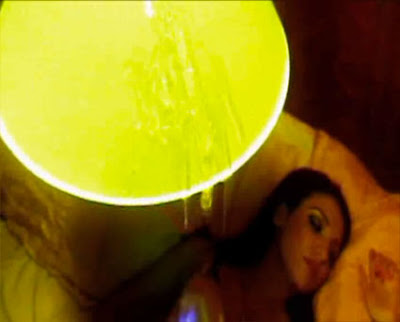 It should be pointed out that there is really no answer to how one should read an Andrey Iskanov film. There are many layers to his work, and each individual viewer who watches them will interpret them differently. The closest and most concrete description I can suggest is reading them as Andrey Tarkovsky channelled via William Burroughs. The style of Iskanov’s films rely heavily on inner monologue that push the narrative forth, and this is an approach I associate a lot with the fine art of Tarkovsky. The rapid imagery and disruptive visuals remind me of Burroughs writing style. 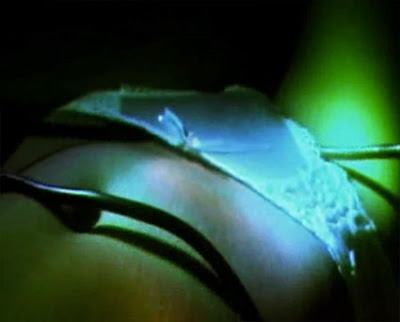 Being a former editor myself, I personally hold editing as the key to creating great cinema; it’s in the dark of the edit suite where a movie can become a masterpiece or a disaster. Sure script and shoot are of high importance, but editing can make or break a movie in an instant. With more than a thousand hours of television productions behind me, I can say that this is the truth. Dodgy story, shoddy camerawork can all be saved to present a decent final result after post. The way Iskanov brings his movies together in the edit suite is impressive and I can only imagine the mammoth task it takes as he composes the visual and audio assaults that his movies are made up of. 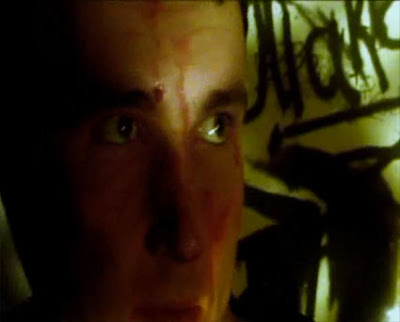 When Iskanov writes his films, he goes about it in his own fashion too. In hindsight this could be a  way of writing that gives an insight into the fragmented and disruptive style his movies play out in:

“I only see short flashes of future scenes, images about which I know nothing. It’s just of puzzle. I see few bright moments, which may be the centre of the film, but no any story or characters. It’s just bright images of some sequences, which are hidden from me and later I start imagining a connection between all of those images.” 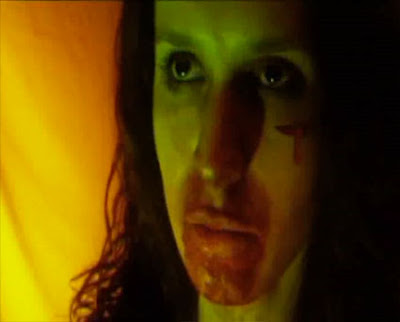 There are some amazingly cunning edits in Ingression, part of them being images of animals in distress, human atrocities and general chaos. This brings sublime nausea to the piece, as these images are truly disturbing. It would be pointed out that despite quite a few shots of animal cruelty, no animals where harmed in the making of the film, the images are archive footage shown in TV screens through the narrative, and Iskanov is an animal lover himself. It’s an effective tool as it brings discomfort to the audience. Being a former picture editor myself, Iskanov and I obviously discussed editing and share a similar philosophy about postproduction, a key position in every production.

“Editing is most important part of filmmaking. Camerawork and sound design will create atmosphere, but the actually film will be born in the editing process!” 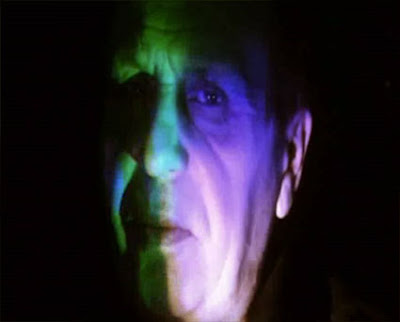 I’ve been privileged to see some of the Re-shoot and reedited first act of Andrey Iskanov's Ingression. Compared to the older cut, I find that the changes in the new version really do work in favour of the movie. Especially the relationship between Alex and Lucy is put into a much more valuable context. Now I see their relationship as it was before the divide that drives Alex over the edge. It’s a more humane and valuable one, which can give an insight into the motivation that, drives Alex forth. More time is spent giving a value to the past relationship, making it more important and a source of loss, frustration and depression, hence creating empathy for Alex, which makes it easier to take his side in the journey.

It is a fascinating trip, with several stand out impressive moments. Bringing moments of drug fueled mayhem, body horror aesthetics and some great special effects I find it to be one of his most comprehensive films so far, and I definitely rank it amongst one of his best films. No matter what influences may have shaped this original visionary, Iskanov has a unique style and his movies are one of a kind. I guess it would be fair to sum up Iskanov’s style as seeing what a person on a bad acid trip sees and experiences. It’s captivating, eclectic and highly addictive. 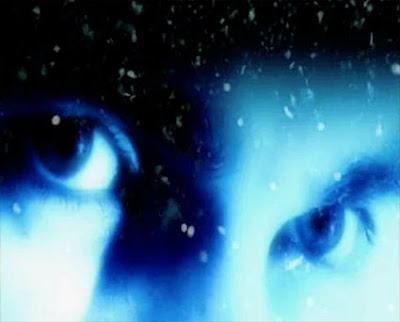 Andrey Iskanov is seeking distribution for Ingression and working Tochka, at his part of the upcoming The Profane Exhibition.

You're a legend for reviewing this!
Sounds like a winner

Great review! Though it's not clear if the movie is actually finished.

As I understood Andrey, he's in post with the last version and seeking distribution for the completed film.

I guess that a deadline of distribution would help close the deal.

Great review!
We are currently running an indiegogo campaign to help Andrey raise $15,000 to finish the film. More info at:
http://www.indiegogo.com/projects/ingression/x/1030125