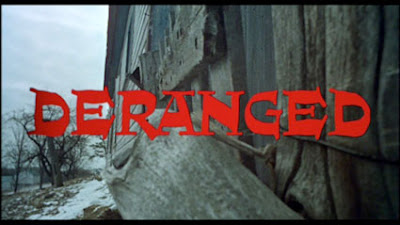 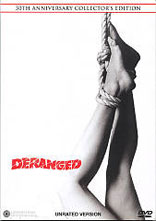 The power of a title is a strong one, and an ever so important one too. Tell meplot, seduce me, and capture my imagination…  Deranged: Confessions of a Necrophile… it don’t get much better that that does it.  I'd stick it really close to Nude for Satan on the cool as heck movie title scale. It is a mighty powerful and potent title if there ever was one… Now, I’ve seen this movie before, several times, and we even aired it at the TV station I used to work at back in the mid nineties, but I’ve never found a release that felt worth the while. It was released as part of MGMs Midnight Movies double features but that was supposed to be cut, so I never picked it up… so when I stumbled over the German unrated DVD release in Bottrop Germany during the Weekend of Horrors last weekend, I did a little happy dance, as this is a find. 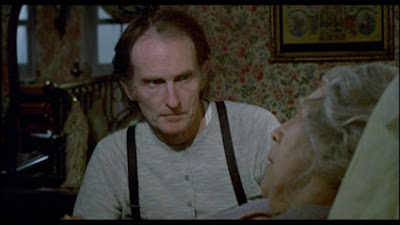 Two movies, both made in the same year, building off the same legend, using the same “based on true story” gimmick, and at times even sharing remarkably similar scenes, Deranged, is more or less the perfect counterpart to Tobe Hooper’s epic The Texas Chain Saw Massacre. Although only one of them would go down in the books as most terrifying movie of all time… 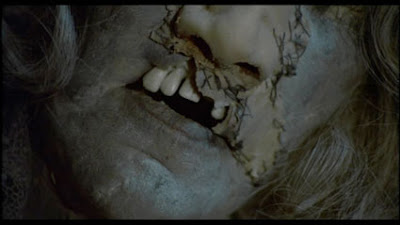 When Ezra Cobb’s [Roberts Blossom] beloved Mother, [Cosette Lee] passes away his world comes tumbling down upon him. Loneliness and isolation get the better of him and he decides that mother, who he still talks too, would be better off back at home instead of buried in a hole in the ground. So he pops of down the cemetery and digs up old Mrs Cobb. Seen as her flesh droops from the decaying corpse, he needs new flesh to keep mother as perky as she used to be, and new flesh means bad news for the ladies of Wisconsin. 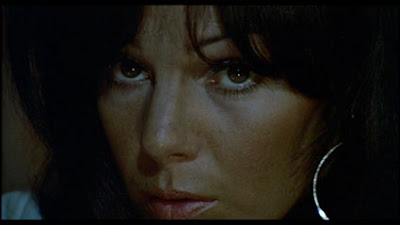 Deranged is a great little mood piece. Perhaps not to high on physically exhausting violence, but damned high on creepy atmosphere. During the first ten, fifteen minutes the film almost comes off as a cheesy little oddity, but then you become drawn in and snared up in the weirdness and aura that Gillen & Ormsby whip up with pretty small means. Now these guys where no strangers to atmospherically laden creepers; Gillen worked as assistant director on producer, Bob Clark’s, Dead of Night, which Ormsby wrote and won an award for Best Screenplay at Sitges in 1975. Ormsby previously collaborated with Clark on Children Shouldn’t Play with Dead Things. Clark would had already produced and direct a pretty neat string of moody genre pieces culminating with the early slasher Black Christmas, which he directed at the same time the other two where directing Deranged. 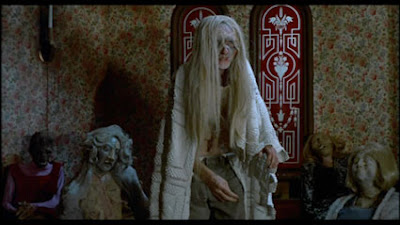 I love how Deranged and Texas Chain Saw Massacre live in parallel worlds. Both feeding off the same pyscho killer legend of Ed Gein. But where TCM is a violent assault on all senses, Deranged is more of a tight moody drama that takes it’s audience into the mind of the insane Cobb. The scenes where poor barmaid Mary [Micki Moore] follows Cobb home only to discover his menagerie of corpses in various stages of decay, not forgetting his female body suit, is every bit as disturbing as TCM. Just as the dinner party in Texas Chain Saw Massacre, the dinner party in Deranged should have become an iconic moment in it’s own right. Roberts Blossom (who only passed away last year) gives an outstanding performance, and definitely a performance that challenges any of the attempts to shine insight into the mind of the maniacs in the Texas Chainsaw franchise… (The later ones aka, reboot’s, that is) 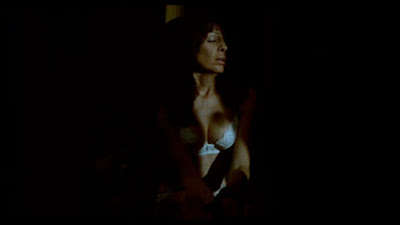 Friends of Cobb try to engage him in a social life, The Kootz family try to hook him up with dates, and suggest several women whom Cobb should consider taking out… it’s a cheap, but pretty tame way to create some kind of empathetic recognition or understanding with Cobb, who rejects the offers as he’s still very much under the power of his dead, but still possessive mother. Although Deranged is not without it’s seedy moments, there is a couple of them, such as when Maureen Selby [Marian Waldman] tries to lure the simple minded Ezra into having sex with her after a staged séance or Mary being tied up and tittyfiddled by Cobb, Deranged does well after almost forty years of trashy, exploitation competition. 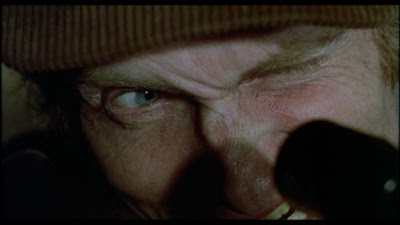 There’s a hilarious gimmick which kind of breaks all storytelling rules,  when the newspaper columnist Tom Sims [Leslie Carlson] acting as a narrator, stepps in every now and again to fill us in on exposition that we need to follow the narrative. Fascinatingly it works, proves that rules are meant to be broken, and it gives the filmmakers an opportunity to tell us how Ezra is feeling deep inside, something that otherwise would have been impossible… 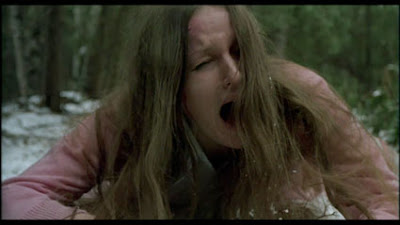 As the film chugs into it’s climax, the final scene recreates the haunting image of Bernice Worden’s decapitated and gutted corpse which police officers found hanging in the barn as they raided Ed Gein’s farm back in 1957. It certainly brings the movie close to the real deal, and delivers a fascinating portrayal of insanity. But what I like the most about this little beauty is perhaps the way it sticks to it’s guns and proves that there isn’t really a lot needed to set a great mood. Compared to Texas Chain Saw I’d even say that the eyeball gouging, head top chopping, brain eating, and gutting of Sally [Pat Orr], is more graphic than anything Tobe Hooper showed us. Texas is a masterpiece of Hithcockian editing where we are tricked into seeing things that never really where there. The psychological strain of forceful imagery is much more effective than anything that could have been put on screen, but Deranged sports some early Tom Savini effects, and already then he knew how to gross out an audience whist keeping it terrifyingly close to reality. 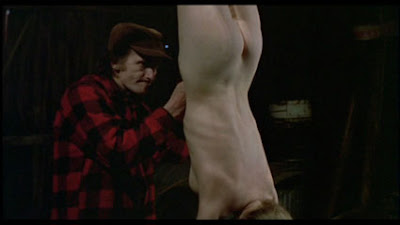 So, the happy dance back in Bottrop was well deserved. This German 30th Anniversary Edition, is a beautiful one. The print is almost pristine, the audio nice and crisp, and for a rare change, the original American soundtrack and English subtitles are optional. The few inserted scenes, the ones removed from US prints to create an R-Rated version, are intact here, although taken from an obvious lesser quality source. But never the less, it’s the otherwise deleted eyeball gouging, skull sawing and brain eating that is missing from all other prints. 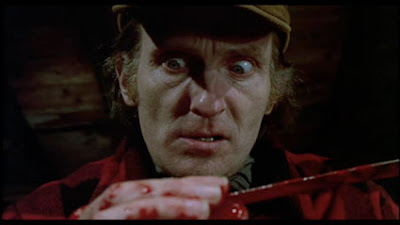