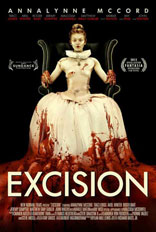 Growing up is Hell… we’ve all been there, adolescence, raging hormones, alone against the world, struggling to be a part of the bigger picture, whilst nobody understands a single word we are talking about…

The American nuclear family was shattered decades ago. Kids want to live their own lives and don’t want to follow guidelines given by parents, teachers, councilors etc. We all know this, and it’s through our emotional recognition with the characters we see on TV and film that we with ease can identify with the youth in despair we see in what best can be called coming of age movie, a genre that basically relies on the basic plot of transforming an innocent youngster into a budding adult. Sometimes as quirky comedies, other times hard as fuck dramas, but I love it best when this genre is meshed with horror themes, as they sometimes really hit it out of the park. Stand By Me, Lost Boys, Jack and Diane, Let the Right One In, and Carrie are just a couple of examples of where it all clicks and makes for a brilliant little gem.

Pauline – played to perfection by AnnaLynne McCord - is a teenage girl, best described as alienated, a loner, a late developer, sexually confused and immensely frustrated. Struggling her way through school, dreaming of a career as a surgeon, trying to keep her head above water is a constant struggle, not made any easier when constantly overshadowed by her younger, more developed, more mature younger sister Grace. You know the type, and you have seen it in every single coming of age flick, every high school film, every youth oriented movie you ever watched, and Pauline fits the archetype to the dot. Although the off kilter erotic and gory amateur surgeon wet dreams which Pauline wakes climaxing from each night are a completely new and unique addition to the teenage angst story.

Time is spent setting up the family structure; a classic shattered one, with a fixed façade so that nobody will ever know of the turmoil on the inside. Pauline is the natural outsider, where strictly religious mother Phyllis [Tracy Lords] is the dominate parent, appalled by her husband Bob [Roger Bart] and deeply concerned about the Grace [Ariel Winter] who suffers from Cystic fibrosis… see, no place for troubled Pauline, hence her being sent to counseling with family priest William [John Waters]. The family shares some absurd dark secrets that intertwine life and disease, which also generates some of the violent frustration and repressed hate with in the constellation.

The way that Bates brings his characters together in sensitivity and strenuous    moments of affection only to flip the scene on its ass when their fixed roles break through is like poking a dirty finger in the open sore that family life can be, and it is heartbreaking. As the formula goes, all underdogs have their moment, and we all know that they find that one challenge that makes them rise to the occasion. Excision has this too, and Pauline finds her quest, the one that will elevate her to legendary status, set everything right and make her the center of attention… the only distraction being that this is coming of age blended with horror and there’s no climax in horror without violent death. Something that makes Excision raise its self above the completion and scream – Look at me you bastards, I made you laugh, but now I’ll tear your hearts out!

All of Pauline’s torment and antagonism builds our empathy for her. She is the obvious point of identification, despite all her disillusions and freaky behavior. Hey come on, who doesn’t love an eccentric weirdo? But what makes her such an interesting character is not the fact that she’s an outsider kid that we can relate to, but the complexity of her character. Because despite being alienated and isolated from peers and family, Pauline is very proactive in her actions. She has an agenda and she sticks to it. She wants to lose her virginity and she makes it happen, again in great originality and in such a way that you can’t possibly not feel for, and with, Pauline. She turns the tables on her tormentors, and gets even in the most awesomely sinister way. She strikes out when she’s cornered. She’s a pretty active character. These are all important actions before the movie grinds into its climax, one that generates a lot of tension. I’m not going to talk about the climax of this film, as it would be idiotic to spoil that experience, and it is an important part of the movie’s realism. No matter what you think when you get there, it’s a true and honest ending. One that I totally respect Bates for sticking to.

There’s’ a great use of guilt in Excision. Catholic guilt, the mother of all guilt! On a few occasions, Bates cuts to intimate moments of Pauline praying. Begging forgiveness for her sins, desperately asking for a sign, a sign that she’s accepted… It shows that she knows her actions and thoughts are wrong, but at the same time coming to the subconscious insight that there is no God.

Metaphorically the prayers also represent how Pauline is taking distance from the world she has grown up in. Challenging God, she takes departure from the catholic upbringing her mother has raised her in. At the same time, Bates is playing mind games with us in the scenes of prayer… Pauline looks as beautiful as she does in her own erotic fantasies. Perfect complexion, beautifully lit, almost angelic, perhaps whilst questioning faith, Bates may be commenting that there is a God who accepts Pauline just as she is… or that there is no God, and that the perfection strived after in prayer, is the same as in Pauline’s dreams.

Excision stays very true to it’s own universe, and delivers no supernatural fix at the end of the line. We are taken along on Pauline’s journey and we stick with her. We empathize strongly with Pauline and really want the best for her. We want that magic moment that this hybrid genre traditionally brings, the destruction of all foes, the telekinetic vengeance, a supernatural fix or the rush of insight, as characters become adults. Instead Bates makes it his own realm in a harrowing way. It’s a brave way to go when Bates easily could have stepped down a completely different path in the last act. But he doesn’t and he keeps realism and painful reveal packed into one disturbing final tweak that sticks haunting insight in the mind of his audience. Growing up is Hell.

The supporting cast is great, bit parts by Ray Wise, Malcolm McDowell, John Waters and Marlee Matlin are nice additions to the fantastic job Arial Winter and Roger Bart do as the family. Although extra credit has to be given to Tracy Lords as Phyllis, the complex mother, struggling through her life with a husband she’s grown to resent, a daughter with a deadly condition and Pauline the weird hormonal rage machine.

Excision is a powerful and beautiful movie, not only story wise, but visually it looks fantastic, as reality and dream crash in contrasting styles and tone. The film is filled with emotional recognition; personal torment and a disturbing climax that totally crashed the buzz the movie set me up for. It’s like riding a rollercoaster without a clue of where it goes, and not knowing if there are enough rails to get you safely home.

Deliriously disturbing, and magically captivating, I love Excision as it takes convention and makes it real. I live for movies like this, movies that dig into familiar genres and niches, only to crush prediction and deliver an impactful movie unlike the others. If you where to see one coming of age horror hybrid this year, then this it the one to see.

Great review of a great movie. I watched it recently as a double feature with The Loved Ones. As a parent who raised a daughter through adolescence, I completely identified with how terrifying teen age girls can be.

Awesome, then you most certainly get this movie and its emotions then don't you! :)