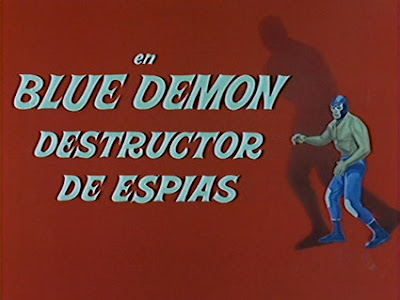 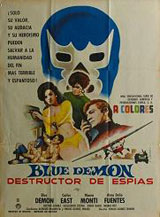 Taking a step away from gothic horrors and going up against human foes instead, this secret agent themed thriller sees masked Luchador Blue Demon racing against a band of super villains to find a deadly formula before it’s used to wipe out the human race! 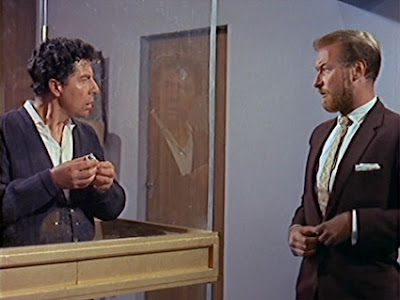 Seeking inspiration overseas – such as the James Bond movies, or possibly the quirky “Flint” movies Luchador films – Luchador films took a short spin into secret agent territory. Starting out with the two Santo vehicles, Operacion 67 and El tessore del Moctezuma, Blue Demon followed with similar movies, Destructor de espias (Destructor of Spies) and Pasaporte a la muerte (Passport to Death). In my book, where Santo may be close to Bond or Flint, Blue Demon is the Harry Palmer of the niche. Down to earth and to the point – but still a charmer with the ladies, and never really holding that self-assuredness where you know absolutely nothing will go wrong. Blue Demon, like Palmer, has an aura of slight vulnerability to him that makes him a much more empathetic character for me. 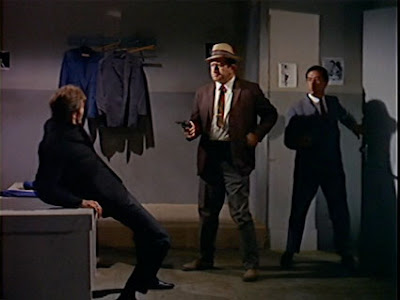 So it may not be top-notch spy action in the vain of James bond, but at least they tried, and the influences are noticeable but restrained by the obvious differences in budgets. It’s an playful take on those bigger, better budgeted movies, but with all it’s cheap charm and naïve enthusiasm – not forgetting that it’s primarily a movie to showcase the immensely popular Blue Demon – these movies are still fine pieces of matinee cinema. 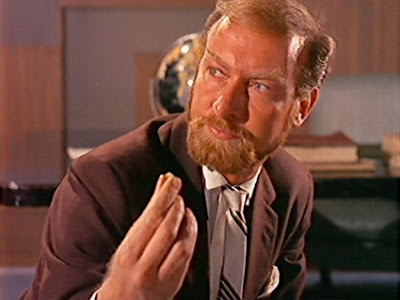 The main plot centres on a mystic formula, invented by Professor Garfield [Chuck Anderson]. This formula is obviously the most lethal poison gas in the world, and if it ends up in the wrong hands – such as the sinister villain Hans [Jorge Rado, who later starred in several Santo & Blue Demon films, and also Sam Peckinpha’s masterpiece The Wild Bunch 1969. And make note that the villain is supposed to be a European!] – the world is domed to extinction. No agent film is worth it’s name unless establishing the super villain early on in the movie, Destructor de espias does so right from the word go as Hans torments and executes one of the competing spies in an attempt to gain the super peligroso formula. Put on the case to find the formula before Hans with his doomsday plans, we find Blue Demon and Super Agent Julio [Carlos East].

A second definitive trait of the spy genre is the presence of beautiful women! Destructor de espias has its fair share of delightful women with the presence of Marcia [Alma Delia Fuentes] and Nora [Maura Monti] Monti being the only real contender against Lorena Velázque, for the title of  numero Uno sex symbol of Mexican exploitation. Monti was originally of Italian origin, and enjoyed a rather fruitions career in the film industry. During the nine years she was active, she starred in over thirty films, before her husband asked her to leave the industry, which she did! 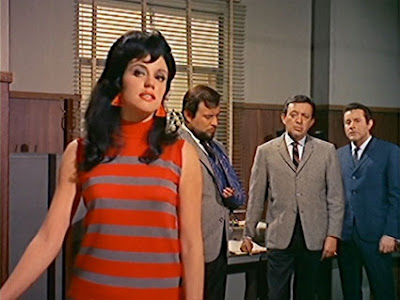 Another feature that I enjoyed with this entry is that there’s two funky nightclub scenes complete with bikini clad go-go girls and suave rock music of the era performed by bands The Rocking Stars and Los Johnny Jets. It has nothing to do with it, but I obviously think of Jess Franco’s many smoky jazz club scenes and that’s always a beautiful thing. 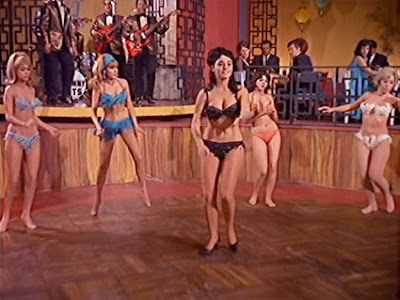 Blue Demon starred in two back-to-back productions that mimicked the suave style of the Bond films… well at least tried. But they are good attempts and despite only a few smaller secret weapons, there are some fun gadget’s in the movie which show what they where after. A flamethrower ring, a "fast escape" bed and those trendy wristwatch walkie-talkies, which Blue Demon and Santo used on every possible opportunity in later films to come. 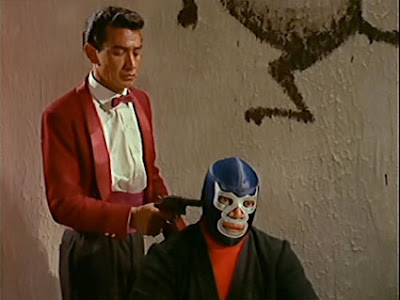 It’s also a movie that takes our protagonists on something of a mini global tour, as they leave Mexico and venture to Chinatown, San Francisco where a pretty dodgy Fu-Manchu like character – who owns the nightclub - makes his entrance. To get the most out of the San Francisco stock footage, and nightclub sets back in Mexico, the dialogue more or less works the name San Francisco in to each and every sentence using every possible minute of production value available. Oh and just wait till you see the show stopping marionette performance that the nightclub owner has performing in his establishment! 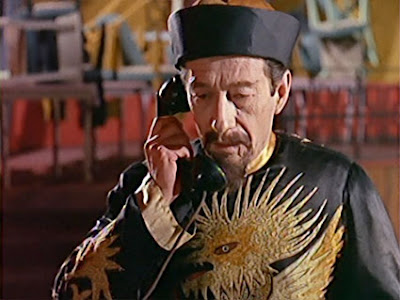 Apart from some fairly well staged fisticuffs with Hans’s henchmen – one fantastic punch out in a mortuary - Blue Demon also has a few good bouts in the ring too. Personally I feel that despite being a Luchador film, the action inside the ring takes a back seat for crime solving and superspy busting – and a fantastic final fight that see’s Blue Demon jumping out of a jeep, into a moving airplane to beat the crap out of sinister villain Hans. 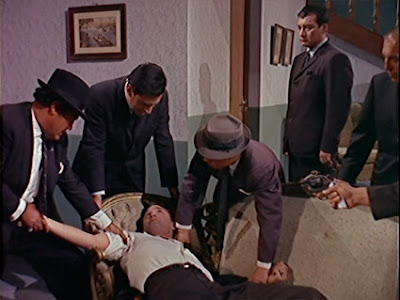 Although he didn’t direct the follow-up, Pasaporte a la muerte (Passport to Death) 1968, director/screenwriter Emilio Gómez Muriel did team up with his co-writer on Destructor de espias, Alfredo Ruanova, and this time they took a brilliant science fiction approach to the spy material, but that’s a completely different story and
Blue Demon, secret agents, sinister villains and hot mamacitas – well, you cant really go wrong - which I’ll say that about any Blue Demon movie, because I love them all! Action, fast moves, overdramatized antagonists, wrestling and great fun all the way through. Just check out that stunning artwork on the poster above and tell me that you don't feel the urge to watch this flick! Viva Blue Demon! 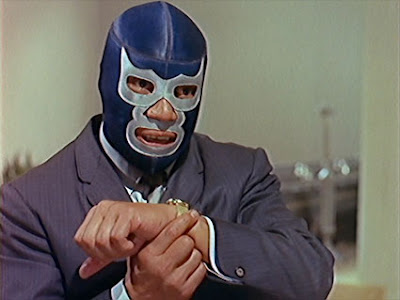