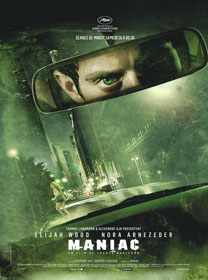 Of all the films to remake why pick one of the dirtiest, sleaziest, vilest mothers of violent films of all time? Why step into the realm of the majestic Joe Spinell, and even try to remake a gritty classic that stands firm on it’s own exploitative values? I’d go as far as claiming that Bill Lustig’s original Maniac is an institution! So why remake a masterpiece?

Sound familiar? Sound like the same discussions we have every time one of our favorite “olden Goldie’s” is rehashed, pimped and dolled up for a new generation? Well to be honest, I find that a lot of remakes do look absolutely fabulous, they spark and jump and shake and kick some ass. Yes they do, and I like quite a lot of the remade stuff. Not in the same way that I love the original sources, but some remakes are visually worth the effort.

Maniac tells the sad tale of reclusive Frank [Elijah Wood], a lone guy who is happiest spending his time alone in his workshop renovating antique mannequins. But Frank also hides a complicated dark side, at night he stalks the streets of New York, murdering young women and taking trophy scalps to the person he talks to back in his small workshop flat. One day a young photographer, Anna [Nora Arnezeder], steps into his workshop and becomes spellbound by the mannequins he has on display. Frank’s world is about to change, but is it for the better? 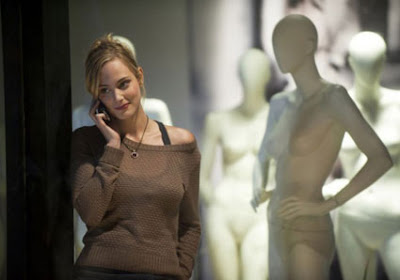 I think we can all agree that the remakes look fantastic and certainly do rock, but what they miss, in their perfected and polished exterior, is the naïveté of the originals. You can’t remake, reboot or reclaim the naïveté of the originals. There’s magic in those originals that we believe in, because of the flaws, the errors, the raw and rough camera work, the not perfect but effective special effects – you know what I mean, back then stuff looked over the top fantastic, now it’s all about looking far to real for comfort - the dubious acting, a magic that occurs when stuff just comes together. You can’t recreate that magic, that naïveté, it just isn’t possible when one looks at a capsule of caught time, and attempt to mimic it, because there’s to much intention put into the imitation. It lacks the magic and the naïveté that fell into place in the original. Hence remakes which never make the same impact.

But still, a lot of remakes do get the job done, despite their refined surface, forced backstory to create empathy for the “monster”, and high-end technical achievements. And sometimes they propel newcomers back into the back catalogue. It’s like new formula drinks; tastes familiar but doesn’t have the same kick it had when you sipped it the first time around

So back to the initial question, how the hell does one remake the Spinell/Lustig epic sleazebag Maniac? The way Aja and Khalfoun have decided to take this is by continuously show the movie from Frank’s point of view. It’s a more visual expedition into the mind of a Maniac, in a completely new way. (Or not, as this is also the gimmick of William Powell’s Peeping Tom made back in 1960) Although it does work, it only takes a short while to get used to it, and then the audience undoubtedly will be inside Frank’s head.

Let’s talk about Elijah Wood. We all pulled a face when they heard Wood was to portray the character made iconic by Joe Spinell. How could cuddly cute, squeaky clean Wood take on the part of an all-time fave maniac? You know when Robin Williams played that sinister dude in OneHourPhoto and he really crepeed you out because you where used to seeing him be a funny guy and the shock of seeing him being malicious and sadistic totally packed a powerpunch to the balls. Well that’s similar to the odd feeling that Wood brings to the part – there’s something off kilter, and Wood manages to make it work. 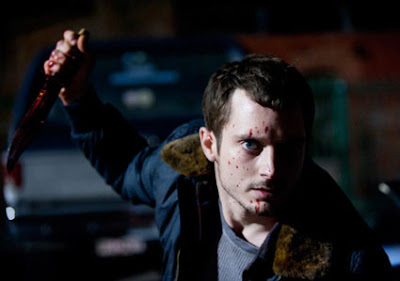 Although the main question posed here is - does it work? Well the answer has to be both yes and no. Khalfoun and Aja (along with writing team Grégory Levasseur – who has written the majority of Aja’s films with him - and C.A. Rosenberg) don’t really bring much new with their remake. On the other hand would we have wanted something completely different? Steve Miner’s Day of the Dead comes to mind, a good enough fun traditional zombie flick, but has fuck all to do with the movie that shares a name with it… which was provocative to a lot of fans, if it’s not Day of the Dead, don’t call it Day of the Dead. This is not the case with Maniac, it’ still primarily Spinell and Lustig’s Maniac with the traditional “Aja addition” placing his own unique moment into a familiar setting and film, hence creating Maniac revamped in a 2012 dressing. But that’s about it. I know the story, I know the beats, I know the key scenes, and I know how the movie is going to climax, and no real surprises are in store for me. BUT; if you are a newcomer to Maniac, this is one sick, slick movie that will disturb you, freak you out and shake you up.

What is new then? Well apart from the POV camerawork, which works really effectively, especially in some of the violence towards the camera scenes, the only real new addition is the contemporary and obligatory genesis story. We are taken back into Frank’s childhood and show us what formed him, what set him on his quest to reconstruct his mother. Like the original, there’s a pretty weak love story that circles around Anna – the photographer, and Frank. But where the original was so much more cold and plain observant, this one tries to generate empathy for Frank. It’s done both through the childhood trauma years, and through the way he believes he has a shot at Anna only to be completely crushed when her boyfriend is revealed. The POV shot helps to lure us as an audience in to this corner, and works as a tool to generate emotion for the Frank character.

I’m still not convinced that we need backstory and emotions built so solidly in favor of “monsters”, but it is a smart way to go when the movie actually is about the Antagonist! I think that’s why all the effort is put on empathizing monsters; it’s some kind of ironic twenty-first century hipster positioning. The classic Antagonist has become the Protagonist; kids today are raised on therapy, parental pampering and a complete lack of demands placed on them. They don’t have to think for themselves, they crave explanations. Where a generation of old-school graduates where raised on unpredictability, stone cold antagonists, and the mystery of not knowing, new times demand new approaches, that’s why all of our favorite monsters, maniacs and beasts these days are all presented with character explanatory backstory hence loosing all their mystic power over the audience. 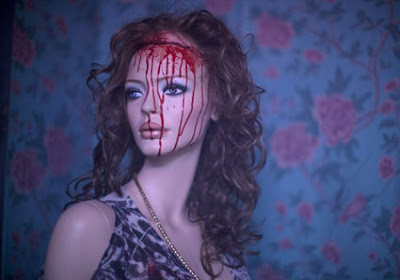 Maniac relies on its exploration of the Frank character, and the moments of grotesque malevolence. This is where the film delivers, as effects are tremendously realistic and whatever fantastic gore the original held, it's all exchanged for brutal nihilism this time around. The last act truly lets it rip, and as just mentioned, there are some really impressive effects and things do get rough indeed.

Technically the movie looks great: Maxime Alexandre’s cinematography is dark and moody as most of the films he’s shot for Aja previously, but just like most remakes, it looks to damned good. Editor magnifique, Baxter, has provided yet another tight and ferociously edited movie. Never letting scenes or takes run to long, but to the point and out as soon as what’s delivered. I really like the soundtrack by “ROB” which definitely has a neo-French sound to it, and isn’t to far from the Double Dragon soundtracks  Francois Gaillard’s neo-Gialli have been so effectively using.

To sum it up: Aja and Khalfoun’s Maniac is a decent take on a classic slasher, using some semi-new tricks to somewhat success. Special effects are top notch, and an emotional roller-coaster is to be found if one wants it. At the current point in time Maniac isn’t a unique movie any more, there’s more than one nihilistic serial killer film out there, and stuff that definitely pushes the envelope further, although this time around it does have an effective empathizing approach to the subject matter. But Aja and Khalfoun’s Maniac looks fantastic, has an awesome soundtrack and get's the job done. If nothing else, this remake will drive a new audience down the path of history, and make them seek out Bill Lustig’s extraordinary shocker from 1980, at least then, they won’t be missing out on one of genre cinemas best head shot moments.

Awesome review as always. I have been looking forward to see this movie since i heard about it this summer. Any tips where I can see it? Thanks!!! Per

It's not out yet. It hits US theaters later this month, but it's played at a few festivals already.

Someone will undoubtedly pick it up over here soon I guess.

Finally grabbed this on blu and watched it the other night. I instantly fell madly in love with it. Can't stop playing that song JUNO on youtube. Yeah this movie is my new obsession.

Fucking great isn't it. It's one of those that grows on me for each viewing. Love the soundtrack too.

Fucking great isn't it. It's one of those that grows on me for each viewing. Love the soundtrack too.