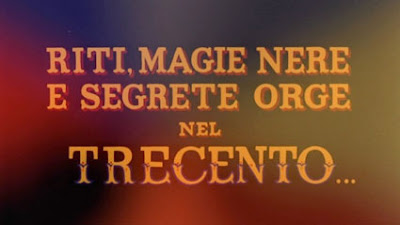 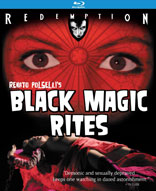 Weird, trippy, freaky, almost incomprehensible… there’s a lot of ways to describe Renato Polselli’s Black Magic Rites, but personally I’d say that it’s something of a misplaced treasure of psychedelic fantasy forced into a grey zone between horror and sexploitation. 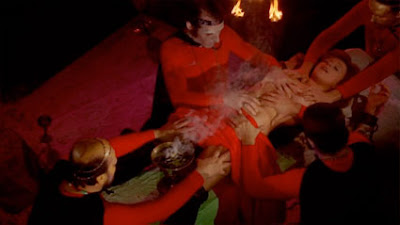 An extremely short pre credit sequence shows us a woman, Isabella [Rita Calderoni, a Polselli regular and star of Luigi Batzella’s stunning Nuda per Satan (Nude for Satan)1974], being traditionally burned at the stake. Cue credits and quickly get us into a strange sect holding a sacrificial ceremony with the hopes of resurrecting the dead Isabella who hangs from their dungeon wall.  Getting safely and predictably through the wonderfully ritualistic sacrifice with it’s almost Mario Bava style lighting. After her heart is torn out of her warm body, the wench is dead. But one more virgin’s heart is needed to resurrect their beloved Isabella. Establishing a mansion with a weird cult in its ruins only requests one more thing for a perfect set up, Black Magic Rites tosses two into the mix. Not only does he present us with a jet-set nouveau riche partying up at the rumoured haunted castle, but he also uses a reluctant occultist [Raul Lovecchio, who also starred in Polselli’s wonderfully trippy Giallo Delirio caldo (Delirium) the previous year) and his henchman who refuse to move out of the old place. 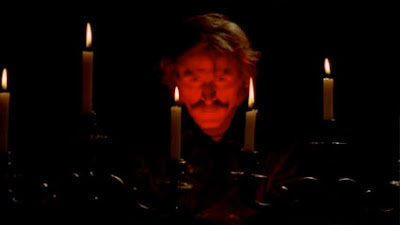 A good fifteen, twenty minutes are spent establishing characters, Jack Nelson [another Polselli regular, Mickey Hargitay] has bought the old castle, which we presume the cultists hang out at. The young women of the village who gossip about Raquel’s death (the cults latest female sacrifice) and ignite several theories of what goes on at the castle: a pagan cult, vampires, ghosts etc. Jack arrives at the castle with his niece Laureen [Calderoni again] – who you don’t need to be a rocket scientist to figure out is the “chosen one”.  Laureen is engaged with village chap Richard Brenton [William Darni, the fourth actor in Black Magic Rites who also starred in Delirum). To celebrate the engagement and pending wedding, Nelson throws a huge party for friends of Laureen and Richard in the mysterious castle… With the main cast established and set, it’s time to let the horrors, sexy times and mind-expanding eeriness to start. 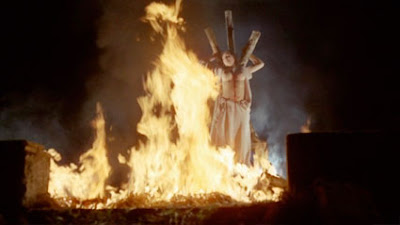 Female partygoers start to go missing, some are turned into Vampires, the cultists prepare their final sacrifice, the Occultist, who turns out to be Count Dracula, lingers in the shadows moping about the wrong doings of the past and characters who are one side of the spectrum slowly shift to show their true colours. I like it, and it keeps Polselli from falling into the passive pit of convention. This is where a somewhat complex web of present day and past times starts to twist and wind into each other. Before the film is over, there will be plenty of nudity, violent deaths, vibrant lighting, funky guitar riffs great reveals and major polarization of the leading characters. 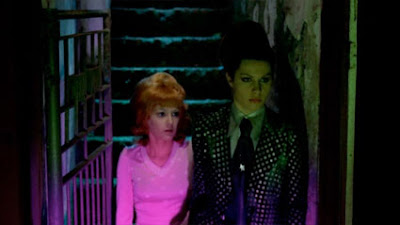 Cinematographer Ugo Brunelli, who was a favoured DP of Luigi Batzella and Robero Mauri, also hot almost a dozen films for Polselli and really pulls out all the tricks of the book on this one. Sinister lighting with a strong use of reds/greens/blues and some superbly composed shots give several awesome looking moments in Black Magic Rites. Going back to this film after so many years – the last time I saw it was on one of the old Redemption tapes – it’s fair to say that this is one fine movie that tries some bold stuff for it’s time and really deserves to be seen again as it’s a intriguingly told piece of genre gold. Black Magic Rites is also an orgy of fast zooms that would put Bava or Franco to shame, and the beat of the editing is furious, at times some of the most forceful and violent that I’ve seen in an early seventies movie. When I do interviews and talk storytelling with filmmakers, there’s a theory that I constantly return to, a theory that talks about the three different movies that you make, the one you write, the one you shoot and the one you edit. Frequently filmmakers come to the conclusion that no matter what you write and shoot, the edit, despite any vision one has when writing and shooting, is where it all comes to life. Black Magic Rites is such a movie, and what frenetic life Polselli pounds into the film with his ferocious editing. This is fine art in the making my friends. If nothing else you should see this film just for the rabid pace that the first half steams on at. Unfortunately Black Magic Rites was only one of the two films Polselli edited (the other being a porn film in the eighties) and that’s a shame, as this is impressive editing indeed. It adds to the conviction that Renato Polselli almost disappears in the shadow of contemporary Italian filmmakers who gained international success. If you are into Euro horror and genre, please make sure to check out some of Polselli’s work, it is splendid stuff. 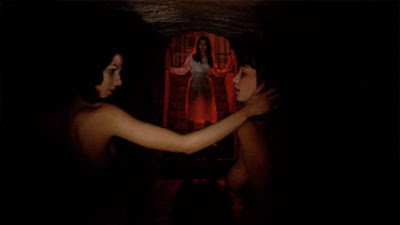 With that said, it’s also fair to point out that the main narrative flashback of Isabella’s execution does go on for way to long and gets kind of tiresome, despite presenting important backstory, exposition and character traits told though fast edits and emotional music. But it’s part of the plot and a decent trick for the twist of the last act. The rapid editing also disappears towards the end of the second act when the vampires start to walk the grounds, women fall out of their dresses and tables start to turn. Although the climactic last act reclaims the hard pace and rapid cuts and the movie comes neatly together style wise. 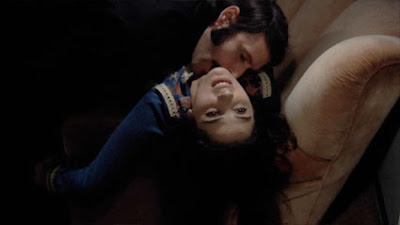 Whilst the movie may come off as a bewildered confusion, courtesy of Renato Polselli’s self written script, it’s actually a pretty intricate piece that unfortunately get’s somewhat lost in its own complexity. Where it’s fairly common praxis that leading lady Rita Calderoni play both modern age Laureen and past times witch Isabella, Polselli doesn’t stop there. Everyone in the cast plays dual roles. It’s a curious approach, and if not for the simple fact that Polselli in a stroke of genius polarizes all the characters in the two time frame setting, one would have looked upon it as a cheap way to save on extras and supporting cast costs. 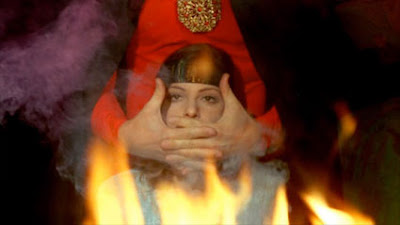 There’s a good use of love themed subplots where the main cast all play parts, a lot of the movie’s story is sadness and yearning when it all comes around. For some strange reason though, where there’s a pretty decent emotional core story and a tense atmosphere, there’s also some rather uncalled for comedic relief where a sinister rape almost comes off as a farcical romp, and don’t get me started on what may just be the worst fake snake, bat and rat moment ever put on film! 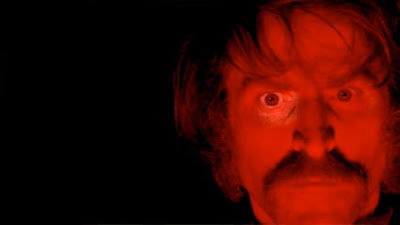 Climaxing in something that reassembles a rush of insight and semi-explanation, it’s obvious that not even the characters can fully explain the odd series of events that have taken place. There’s several questions posed, what was true, what was lie, what was reality and what was fantasy. One leaves the film slightly confused and must self debate the possibly if all was all merely sinister plan concocted by the cult leader, or was it just hauntings of past love or merely all just an emotional fever dream. 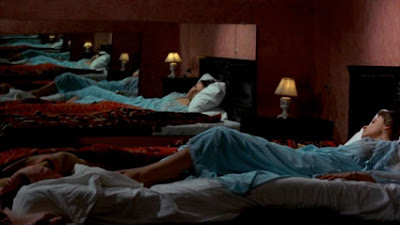 (Which you now can do in full HD through Redemption and Kino Lorbers series of Euro cinema releases.)

Here's a pretty spoilerish trailer if you feel like watching key scenes and story!

Good in-depth look at this film. Glad you appreciate Polselli's work as well - I love Nude for Satan and Delirium, plus have a soft spot for the insanity-inducing Black Magic Rites too (so great that it's been unleashed on Blu-ray). Another good one is The Vampire and the Ballerina, which you should enjoy if you like things like Playgirls and the Vampire, although it's a bit hard to come by. There are a few interesting looking things in Polselli's filmography and it's a pity he's not been acknowledged a bit more widely so we have a chance of getting to see some of this stuff.